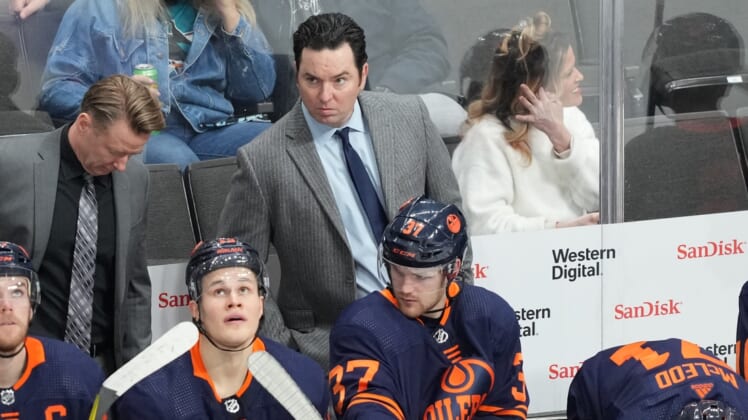 Nick Blankenburg’s first NHL goal broke a tie near the halfway mark of the third period, and the Columbus Blue Jackets scored four times in the final frame to cool off the visiting Edmonton Oilers, and overshadow Connor McDavid setting a career high for points, with a 5-2 victory on Sunday.

Edmonton led 2-1 after two periods, but Columbus (36-36-7, 79 points) tied it 1:36 into the third, when Oliver Bjorkstrand backhanded home a rebound to snap an 11-game point drought. Then on the power play, Bjorkstrand (two assists) set up Blankenburg, who drove the puck from the point, through traffic and by Oilers netminder Mikko Koskinen (26 saves) with 10:46 left in regulation.

Playing in his sixth NHL contest, Blankenburg also posted his first multi-point game by assisting on Eric Robinson’s first-period goal. Jack Roslovic added some late insurance with his fourth goal in three games, Cole Sillinger had an empty-netter, Jakub Voracek recorded three assists and Elvis Merzlikins made 33 saves for the Blue Jackets, who snapped an 0-3-1 slide by winning for just the fourth time in 16 games.

Meanwhile, McDavid assisted on Evander Kane’s fifth goal in three games and Leon Draisaitl’s 55th of the season to sit at a career-high 118 points for the Oilers (46-27-6, 98 points), who had won four in a row and 10 of the previous 12. With those two assists, McDavid also tied a career high with 75, but the Oilers failed in their chance to clinch home-ice in the first-round of the playoffs.

His milestone point came just 3:08 into the game, on a drop pass for Kane, who blazed the puck past Merzlikins. However, Edmonton couldn’t take advantage of that early momentum, and Columbus tied the contest with 4:02 left in the opening period when Robinson got enough of his stick on an active puck in front of Koskinen.

McDavid’s second assist gave Edmonton back the lead at 5:30 into the second when he delivered a circle-to-circle pass to Draisaitl, who one-timed the puck, on one knee, for his 24th power-play goal of the season.