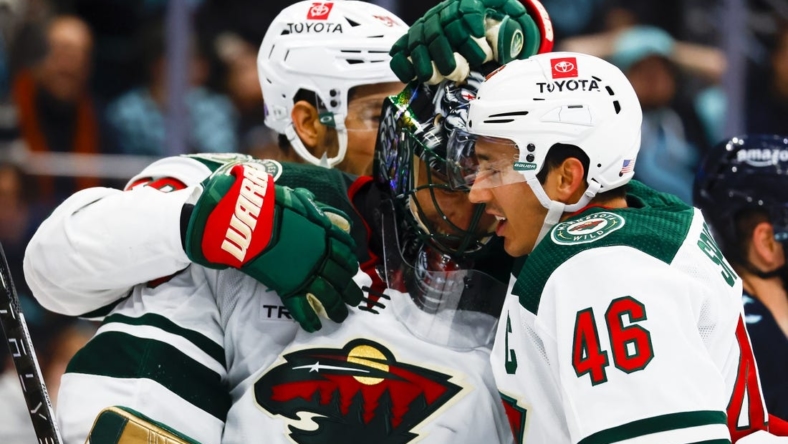 Mats Zuccarello scored the game’s lone goal, helping the Wild avenge a 4-0 loss to the Kraken on Nov. 3 in Saint Paul, Minn. Minnesota wrapped up a three-game swing along the West Coast to Los Angeles, Anaheim and Seattle with a 2-1-0 record.

It was Fleury’s 72nd career shutout, breaking a tie with Harry Lumley and Lorne Chabot and moving him into sole possession of 12th place in NHL history. Fleury is third with 526 career wins.

The 37-year-old Fleury, in his 19th NHL season, got plenty of help from his defense, as the Wild had a 22-5 edge in blocked shots. Seattle’s Yanni Gourde and Oliver Bjorkstrand both had chances from in close in the final seconds, but Fleury turned them aside. In the loss, Seattle’s Martin Jones stopped 20 of 21 shots.

Brock McGinn scored the go-ahead goal early in the third period and visiting Pittsburgh went on to defeat Toronto.

Evgeni Malkin had a goal and an assist for Pittsburgh. Jason Zucker and Jake Guentzel also scored for the Penguins, who have won two straight after losing seven in a row. Casey DeSmith stopped 28 shots for Pittsburgh in his second consecutive start.

Zach-Aston Reese and William Nylander scored for Toronto in the annual Hall of Fame game. Erik Kallgren made 19 saves for the Maple Leafs, who have lost two in a row.

Sonny Milano scored his first two goals for Washington, John Carlson returned from a six-game absence and notched his 600th career point in a victory over visiting Tampa Bay.

Carlson, a defenseman, set up left winger Milano on a breakaway for the milestone point. Milano scored again in the third. Nickl Jensen had an assist for his 100th career point. Anthony Mantha, Aliaksei Protas and Conor Sheary tallied, while goaltender Darcy Kuemper stopped 28 shots.

Timo Meier and Logan Couture scored 1:05 into the second period to break a tie game, then visiting San Jose held on to snap a five-game winless rut with a victory vs. Dallas.

Alexander Barabanov and Tomas Hertl had a goal with an assist each, and James Reimer made 25 saves for the Sharks, who were mired in an 0-3-2 slide. San Jose also snapped a seven-game losing streak at Dallas.

The Stars were handed a second straight loss despite two goals from Jamie Benn. Jason Robertson’s six-game goal streak ended, but he had two assists. Jake Oettinger allowed a season-high five goals and made 13 saves after missing the last four games with a lower-body injury.