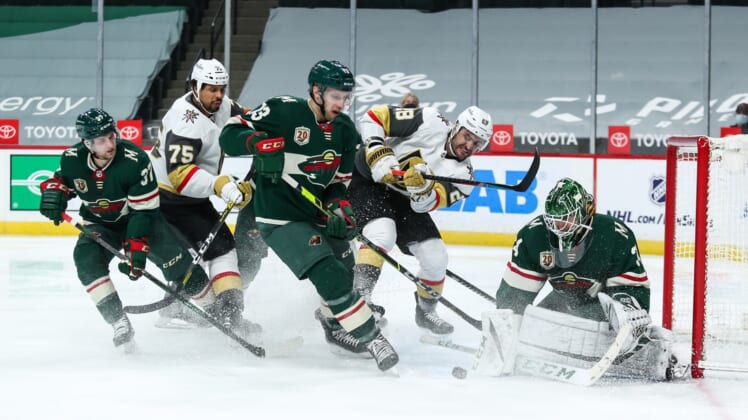 Kevin Fiala and Jonas Brodin scored goals for Minnesota, which was playing just its third home game since Jan. 31 because of a two-week COVID-19 pause combined with a road-heavy schedule.

Kahkonen, 24, improved to 10-4-0 on the season while improving his personal winning streak to seven games.

Vegas’ Marc-Andre Fleury, starting for the 12th time in the past 13 games, had 20 saves. The Golden Knights played without leading scorer Mark Stone (undisclosed) and top defenseman Alex Pietrangelo (left arm), who sustained injuries in the team’s 4-0 victory at San Jose on Saturday night.

Kevin Shattenkirk, Jakob Silfverberg and Ben Hutton also scored while Max Comtois had three assists as the Ducks reached a season high in goals before the end of the second period.

Adrian Kempe had a hat trick for the Kings, including the game-tying goal with 2:32 remaining in regulation on a deflection in front of the goal. Los Angeles lost for the fifth time in the past six games (1-2-3) but did earn a point for the 11th time in the past 13 games (7-2-4).

Bo Horvat scored the game-winner in a shootout to give host Vancouver a win over Montreal.

Jeff Petry scored for the Canadiens in the first period, and Adam Gaudette responded for the Canucks with 41 seconds left to force overtime.

Vancouver’s Thatcher Demko won his fourth straight start, turning away 29 shots and all three of the Canadiens’ shootout attempts. Carey Price was tagged with the loss despite making 28 saves.

Marc-Edouard Vlasic and Logan Couture also registered goals for San Jose, and Devan Dubnyk made 24 saves in the win. Ryan Donato registered primary assists on both of the Sharks’ regulation goals.

Connor McDavid had two assists as Edmonton recorded a win over visiting Ottawa. The Oilers improved to a perfect 5-0-0 against the Senators this season. The two teams will play again in Edmonton on both Wednesday and Friday.

Edmonton’s lineup saw McDavid and Leon Draisaitl officially reunited onto the same line, playing alongside Kailer Yamamoto. The new formation immediately delivered four points, as Yamamoto and Draisaitl each scored and McDavid collected his ninth multi-assist game of the season.

Antti Raanta stopped all 16 shots he faced in relief of the injured Darcy Kuemper, and Derick Brassard, Jakob Chychrun and Johan Larsson scored goals as Arizona beat Colorado in Denver.

Oliver Ekman-Larsson and Clayton Keller had two assists each for the Coyotes, who have won three of their past four games. Valeri Nichushkin and Andre Burakovsky scored and Philipp Grubauer had 11 saves for Colorado.

Kuemper left the game early in the third period after making 17 saves. Coyotes coach Rick Tocchet said postgame that Kuemper sustained a lower-body injury and would be re-evaluated Tuesday.