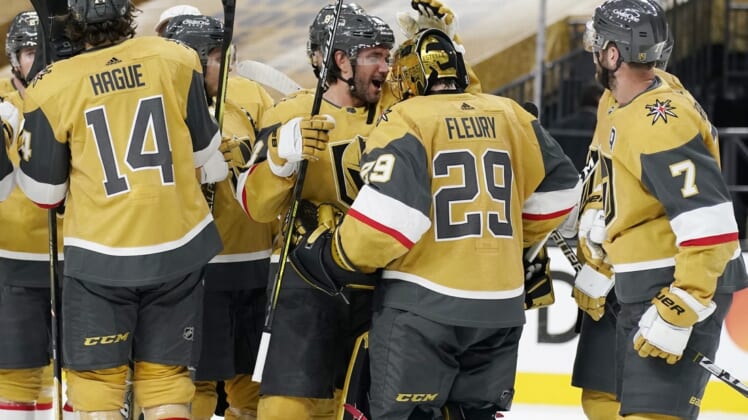 William Karlsson set a club record for the fastest goal to start a game as the Vegas Golden Knights extended their franchise-record winning streak to 10 games with a 5-2 victory over the Colorado Avalanche on Wednesday night in Las Vegas.

Karlsson’s goal after 10 seconds set the tone. Vegas’ Max Pacioretty had two goals and an assist, while Mark Stone had a goal and two assists. Jonathan Marchessault also scored a goal for the Golden Knights, who also broke a tie with the New York Islanders for the longest win streak in the league this season.

Marc-Andre Fleury made 35 saves as Vegas extended its West Division lead to six points. It was the 488th career victory for Fleury, who moved within one of Roberto Luongo for third place on the NHL’s all-time wins list.

Devon Toews and Ryan Graves scored for second-place Colorado. Nathan MacKinnon added an assist to extend his point streak to 15 games, the longest of his career and in the NHL this season. Devan Dubnyk had 21 saves as Colorado dropped its third straight game, the team’s longest losing streak this season.

Jason Spezza and Morgan Rielly each had two assists and Jack Campbell made 32 saves as Toronto recorded a road victory over Montreal to become the first team in the North Division to clinch a postseason berth.

The Leafs have won three straight games and have a six-point lead on idle Calgary for the division’s fourth and final playoff spot. The Habs are only 4-9-0 in their last 13 games. Nick Suzuki scored the Habs’ only goal as Montreal has dropped five of seven head-to-head meetings with Toronto this season.

The Blues trailed 3-1 after two periods, but Mike Hoffman scored his second power-play goal of the night 3:49 into the third. Then, Jordan Kyrou pushed the puck through the legs of Wild netminder Cam Talbot (28 saves) at the 7:41 mark. Thomas, who assisted on Kyrou’s goal, finished the comeback by flipping the puck past Talbot.

Hoffman had three points while Thomas, Kyrou and David Perron (two assists) had two apiece for the Blues. St. Louis goaltender Jordan Binnington made 26 saves. Marcus Foligno had a goal and an assist, and Joel Eriksson Ek and Jonas Brodin scored for the Wild, whose season-high seven-game winning streak ended.

Connor McDavid made history with three assists while Tyson Barrie and Ryan Nugent-Hopkins both collected one goal and one assist to lead Edmonton past host Winnipeg.

Edmonton’s Leon Draisaitl also scored and goalie Mikko Koskinen made 29 saves on yet another big night for McDavid. The Oilers captain set an NHL record with nine consecutive multi-point games (seven goals, 15 assists) against a single opponent in one season.

The Oilers have a three-point edge on the Jets in the chase for the second spot in the North Division, and Edmonton has two games in hand. Blake Wheeler scored Winnipeg’s lone goal. Connor Hellebuyck stopped 24 shots for the Jets, who are on a season-worst five-game losing streak.

San Jose scored three first-period goals and Josef Korenar made 28 saves as the Sharks held on to defeat visiting Arizona.

Evander Kane, Rudolfs Balcers and Kevin Labanc scored early for San Jose, and Tomas Hertl added an empty-net goal in the final minute. The Sharks leveled the season series with the Coyotes at three wins apiece.

Phil Kessel and Johan Larsson were the goal-scorers for the Coyotes. Darcy Kuemper, who was taken out of the Coyotes’ 6-4 loss at San Jose on Monday, made 27 saves on Wednesday.

Brady Tkachuk had a “Gordie Howe hat trick” with a goal, assist and a fight as Ottawa defeated visiting Vancouver.

Thomas Chabot added a goal and an assist for the Senators, who moved out of last place in the all-Canadian North Division for the first time since the opening week of the season.

Victor Mete, Chris Tierney, Josh Norris and Colin White also scored for Ottawa, which took three of four games from Vancouver in the home-and-home series that featured two games in each city. Alex Formenton had two assists and goaltender Marcus Hogberg made 19 saves.

Cam Fowler scored with 1:01 left in the game and visiting Anaheim rallied to edge Los Angeles.

Sam Carrick and Sam Steel also scored, and John Gibson made 28 saves for the Ducks, who rallied from a 2-0 deficit in the second period to end a five-game losing streak.

Adrian Kempe had a goal and an assist, Gabriel Vilardi also scored and Calvin Petersen made 19 saves for the Kings, who dropped eight points back of the final playoff spot in the West Division with nine games remaining.