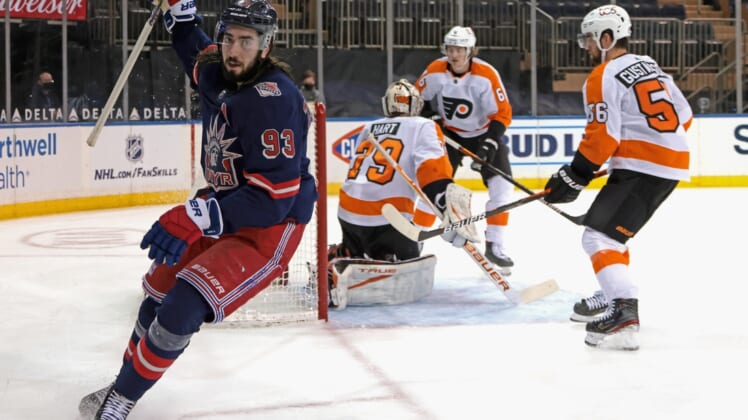 The seven goals were one shy of the franchise’s record for a period, set when they scored eight in a 12-1 win over the California Golden Seals on Nov 21, 1971. The Rangers hadn’t scored seven goals in a single game since a 7-2 victory over the Vancouver Canucks on Nov. 15, 2016.

Zibanejad’s hat trick, achieved in just 10:10, began with a breakaway short-handed goal and also included an even-strength goal and a power-play tally. He also assisted on the second period’s first three goals, two by Pavel Buchnevich and one by Jacob Trouba, to tie the New York Islanders’ Bryan Trottier, who scored six points in the second period of a 9-4 win over the Rangers on Dec. 23, 1978.

The Rangers’ historic night happened with a fill-in coaching staff on the bench. Head coach David Quinn and his assistants were unavailable due to NHL COVID-19 protocols. Kris Knoblauch, the head coach of the club’s AHL affiliate, the Hartford Wolf Pack, served as acting head coach.

Nikolaj Ehlers scored 55 seconds into overtime to lift host Winnipeg to a win over Montreal.

Kyle Connor had two goals and Blake Wheeler scored once for the Jets. Pierre-Luc Dubois chipped in three assists. Phillip Danault, Brendan Gallagher and Tyler Toffoli countered for the Canadiens.

With Jets head coach Paul Maurice skating three forwards in overtime, the Canadiens’ Jeff Petry coughed up the puck and gave Winnipeg a three-on-two. Ehlers took the shot and ripped it through Price’s 5-hole for the victory.

Leon Draisaitl recorded three assists while Jesse Puljujarvi, Ryan Nugent-Hopkins and Darnell Nurse each had a goal and an assist for the Oilers. Edmonton’s Dominik Kahun, Zack Kassian and Alex Chiasson also scored, and goaltender Mike Smith turned in a 30-save performance.

Thatcher Demko continued his strong play in net with 30 saves and Adam Gaudette scored the lone goal of the shootout, lifting visiting Vancouver past Ottawa for its third straight win.

Bo Horvat had a goal and an assist and Brock Boeser also scored for the Canucks, who have won six of their past seven games and all five meetings with the Senators this season.

Ryan Dzingel and Josh Norris scored for the Senators. Ottawa goalie Filip Gustavsson made his NHL debut in place of Joey Daccord (19 saves), who needed to be helped off the ice with an apparent leg injury early in the third period. Gustavsson stopped all eight shots he faced in regulation and overtime before losing in the shootout.

Shea Theodore had a goal and two assists and Ryan Reaves scored his first goal of the season as Vegas rallied from a two-goal deficit in the third period to defeat visiting San Jose.

Cody Glass, Nicolas Hague and Alec Martinez also scored and Marc-Andre Fleury made 29 saves for the Golden Knights, who extended their winning streak to four games. Tomas Nosek added two assists as Vegas improved to 5-0-0 against San Jose this season.

Trevor Moore, Anze Kopitar and Drew Doughty each had a goal and an assist for Los Angeles in a win against visiting St. Louis.

Carl Grundstrom also scored and Calvin Petersen made 19 saves for the Kings, who improved to 5-1-1 against the Blues this season.

Mike Hoffman scored and Jordan Binnington made 20 saves for the Blues, who have lost a season-high five consecutive games (0-2-3).