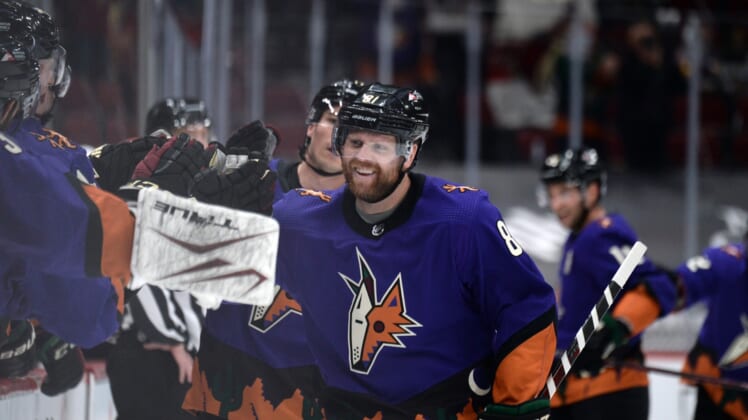 Phil Kessel had a hat trick and also prevented a goal as the Arizona Coyotes completed a two-game sweep of the visiting San Jose Sharks with a 4-0 victory on Saturday night in Glendale, Ariz.

Clayton Keller added a goal and two assists and Adin Hill made 34 saves for his second career shutout as the Coyotes won their third consecutive game and their fourth in the past five.

Sharks goaltender Devan Dubnyk stopped 23 of the 26 shots he faced.

Ekblad took a pass from Jonathan Huberdeau in the slot and then beat Anton Khudobin with a backhand shot on his blocker side for the game-winner, his 11th goal of the season. Carter Verhaeghe notched his second career hat trick and also assisted on the winning goal for Florida. Noel Acciari added two assists and Sergei Bobrovsky finished with 31 saves to improve to 15-1-1 all-time against the Stars.

Joel L’Esperance, Denis Gurianov and John Klingberg scored goals and Joel Hanley had two assists for Dallas, which fell to 2-9 in games that have been decided after regulation. Khudobin stopped 24 of the 28 shots he faced.

Auston Matthews scored his first goal in six games at 54 seconds of overtime and host Toronto, which scored twice in the third period, came back to defeat Edmonton.

Matthews, who earlier had an assist, scored on a shot from the left circle that was deflected twice before going into the net for his 22nd goal of the season. William Nylander had a goal and an assist for Toronto, and Pierre Engvall and John Tavares each scored a goal. Alex Galchenyuk added two assists.

Craig Smith scored the go-ahead goal with 3:50 remaining in the third period to propel host Boston to a victory over skidding Buffalo.

Matt Grzelcyk scored one goal, Nick Ritchie collected a goal and an assist and Dan Vladar finished with 25 saves for the Bruins, who have won three of their past four games. Boston played without star forward Brad Marchand after he was placed on the COVID-19 protocol list.

Kyle Okposo and Sam Reinhart each scored and Linus Ullmark turned aside 33 shots for the Sabres, who extended their franchise-worst winless streak to 17 games (0-15-2).

Philadelphia was outscored 17-3 in the previous two losses to the Rangers.

Mika Zibanejad scored the lone goal for the Rangers. Zibanejad has 13 points — seven goals and six assists — in the last three games against the Flyers.

Max Pacioretty tapped in his own rebound 1:56 into the extra session, and visiting Vegas beat Colorado.

Joonas Donskoi and Devon Toews scored, and Philipp Grubauer had 31 saves for the Avalanche. Colorado had its seven-game home winning streak snapped.

Adam Erne and Robby Fabbri scored 29 seconds apart in the first period, and Detroit snapped a three-game losing streak with its win over visiting Columbus.

Anthony Mantha also scored, Dylan Larkin had two assists and Calvin Pickard stopped 21 shots in his first start since November 2019 for the Red Wings, who played one of their better games of the season after being outscored 12-1 over the previous three contests.

Nick Foligno scored and Elvis Merzlikins made 31 saves for Columbus, which is fighting for a playoff spot but mired in an 0-2-1 rut.

Bryan Rust had a hat trick and Sidney Crosby had a goal and an assist for Pittsburgh, which built a five-goal lead en route to an easy win over visiting New York.

Mathew Barzal had a goal and assist, and Anthony Beauvillier and Jordan Eberle also scored for the Islanders, who had won three straight and were 14-2-1 in their previous 17.

Necas ripped home the game-winning marker — his ninth goal of the season — from above the right circle on the Hurricanes’ sixth power play at 16:07. The tally helped them move to 3-3-0 against Tampa Bay in their last regular-season game hosting the first-place Lightning.

Ryan Johansen, Rocco Grimaldi and Mikael Granlund scored goals for the Predators, who climbed to within two points of Chicago for fourth place in the Central Division by winning for the sixth time in seven games.

Chicago’s only goal came early in the third period from rookie Pius Suter, who scored in his third straight game. His 11th of the season vaulted him into a tie with Minnesota’s Kirill Kaprizov for the league rookie lead in goals. Kevin Lankinen made 31 saves for the Blackhawks.

Third-period goals by Andrew Mangiapane and Sam Bennett were the difference as host Calgary snapped a four-game losing streak by beating Winnipeg.

Goaltender David Rittich made 22 saves, while Josh Leivo and Mark Giordano also scored for the Flames, who recovered after blowing a 2-0 lead.