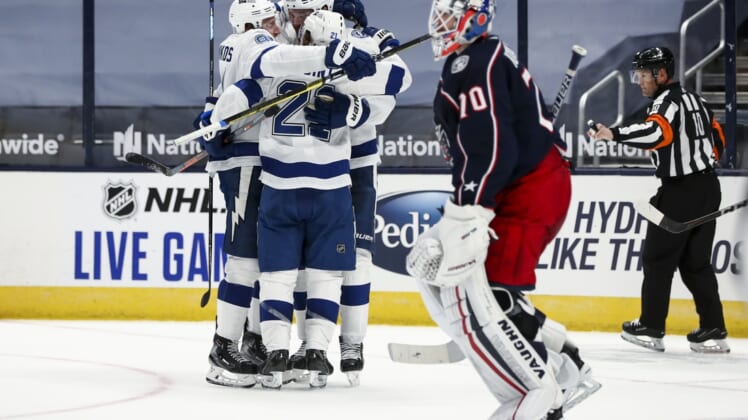 Brayden Point tipped in a pass from Victor Hedman in overtime as the Tampa Bay Lightning stayed perfect on the season with a 3-2 win over Columbus in the Blue Jackets’ home opener on Thursday.

Hedman rushed out of his own end, started a give-and-go pass with Steven Stamkos and slid a pass to Point for the game winner in close at 1:56 into the three-on-three extra session.

Tampa Bay, which played just its third game after postponements against Dallas (COVID-19 protocol) on Sunday and Tuesday, received goals from Blake Coleman and Mathieu Joseph. Ryan McDonagh assisted on both goals in regulation, giving him 301 points for his career. Goaltender Andrei Vasilevskiy moved to 3-0-0 by stopping 23 of 25 shots.

Playing in front of entirely empty stands in their first home game, Columbus got a goal and an assist from Oliver Bjorkstrand, and Nick Foligno netted on the power play. Joonas Korpisalo made 34 saves on 37 shots for Columbus, which lost its second consecutive 3-2 overtime game.

Jake DeBrusk scored the lone goal in the shootout to lift host Boston past Philadelphia.

James van Riemsdyk scored two goals for the Flyers while Claude Giroux and Travis Sanheim had one goal apiece. Jake Voracek contributed three assists to eclipse the 700-point mark for his career.

Tyler Toffoli had his second multipoint game in two nights, collecting two goals and an assist to lead Montreal past host Vancouver.

Toffoli became the third player in NHL history to score each of his first five regular-season goals for a new franchise against one of his former teams. He logged his fourth career hat trick Wednesday in a 6-5 shootout loss to the Canucks.

Joel Armia added two goals and two assists for the Canadiens while Josh Anderson, Jake Evans, and Ben Chiarot each had a single goal. Bo Horvat scored twice for the Canucks, Brandon Sutter had a goal and Tyler Myers notched two assists.

Nikolaj Ehlers and Mark Scheifele each had a goal and an assist as visiting Winnipeg beat Ottawa.

Winnipeg has won its last two games while the Senators are on a three-game winless streak (0-2-1).

Jordan Eberle scored twice and Mathew Barzal had a goal and two assists for New York, which never trailed in defeating New Jersey in Uniondale, N.Y.

Brock Nelson also scored for the Islanders, who have won two consecutive games. Goalie Semyon Varlamov, whose season-opening shutout streak was snapped at 142 minutes and 10 seconds when Nathan Bastian scored in the second period, made 30 saves.

Varlamov’s streak was the eighth-longest season-opening shutout stretch in NHL history and the longest since Darcy Kuemper went 164 minutes and 2 seconds at the start of the 2014-15 season. Emergency starter Scott Wedgewood recorded 31 saves in net for the Devils, who lost Mackenzie Blackwood to the NHL’s COVID-19 protocol list less than two hours before faceoff.

Adrian Kempe scored the tiebreaking goal with just under four minutes to play and Los Angeles edged visiting Colorado for its first victory of the season in four tries.

Drew Doughty and Gabriel Vilardi also scored power-play goals in the second period as the Kings topped the Avalanche two days after their rally against Colorado fell a goal short. Blake Lizotte added an empty-net goal for the Kings with 41.1 seconds remaining.

Mikko Rantanen and Nathan MacKinnon scored first-period goals for the Avalanche, with each recording an assist, but the Colorado offense was unable to deliver from there. Gabriel Landeskog hit the post with 1:57 remaining as the Avalanche nearly tied the game.