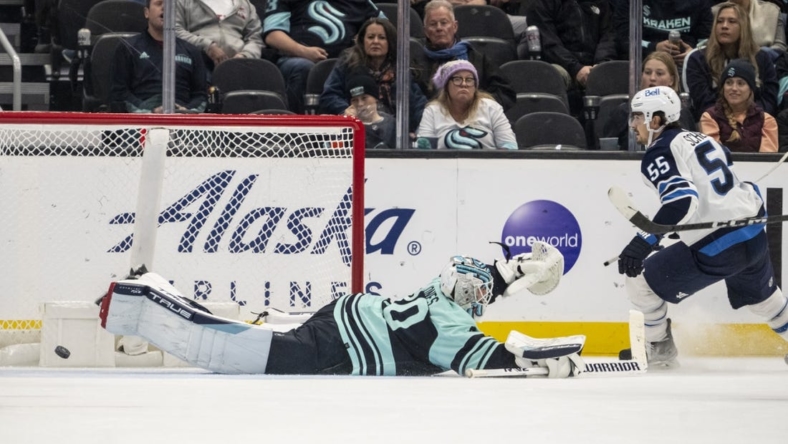 Mark Scheifele scored twice, including the game-winner on a two-on-one break 54 seconds into overtime, as the Winnipeg Jets rallied to defeat the host Seattle Kraken 3-2 Sunday night.

Scheifele took a pass from Josh Morrissey and fired a shot into the upper right corner of the net as the Jets won for the seventh time in their past nine games (7-1-1). With Winnipeg goalie David Rittich pulled for the extra skater, Blake Wheeler scored his 300th career NHL goal on the power play to tie the score with 5.2 seconds left.

Jordan Eberle and Brandon Tanev scored for Seattle, which is 5-1-1 in its past seven games. Martin Jones made 27 saves.

The Kraken took a 2-1 lead on Tanev’s goal at 7:02 of the third. Teammate Yanni Gourde stole the puck just inside Seattle’s own blue line, starting a three-on-two rush. Tanev carried the puck into the offensive zone on the right wing, cut back toward the middle and scored on a low wrist shot from the high slot. Oliver Bjorkstrand also was credited with an assist.

Connor Clifton had a goal and an assist while David Pastrnak dished out two helpers for Boston, which has won a franchise-record nine straight at home to begin the season. Patrice Bergeron, Pavel Zacha, Brad Marchand and Tomas Nosek also tallied. Linus Ullmark moved to 11-1-0 following a 28-save effort.

Mikhail Sergachev scored two of Tampa Bay’s four first-period tallies — all before visiting Washington registered a shot on goal — to win the second game of a home-and-home set.

Opening a three-game homestand, the Lightning received a goal and an assist from both Nick Perbix and Nikita Kucherov. Perbix, a rookie defenseman, stretched his point streak to a career-high four games. Sergachev’s output in the first 20 minutes (two goals, two assists) matched a franchise record for most points in a period set by Martin St. Louis on Feb. 12, 2009.

San Jose trailed 2-0 when Lorentz put home the rebound of his own shot with 6:04 remaining in regulation. Less than two minutes later, ex-Wild center Sturm drove the puck by screened Minnesota goaltender Filip Gustavsson (35 saves) to tie the contest with his sixth goal of the season.

Nick Bonino and Alexander Barabanov each scored in the shootout, and James Reimer (28 saves) stopped two of Minnesota’s chances for the Sharks. Frederick Gaudreau scored within the first seven minutes of the game for Minnesota, which padded its advantage in the third when Connor Dewar converted a short-handed goal off a two-on-zero chance with Mason Shaw 3:37 into the final frame of regulation.

Igor Shesterkin made 17 of his 31 saves in the first period as host New York recovered from a slow start and beat Arizona to snap a three-game home losing streak.

Barclay Goodrow and Adam Fox scored 78 seconds apart late in the second period. Chris Kreider added a power-play goal early in the third as the Rangers improved their home record to 4-3-3. New York also improved to 13-1-2 in the past 16 meetings with Arizona.

Shesterkin, who earned the No. 1 star of the game honors, helped the Rangers hold the Coyotes scoreless on their first five power plays before Clayton Keller scored midway through the third. Arizona goalie Connor Ingram made 23 saves.

Joe Pavelski and defenseman Esa Lindell each collected one goal and two assists apiece to lift visiting Dallas to a win over Philadelphia.

Jason Robertson scored and set up a goal, Matej Blumel scored his first NHL goal, Luke Glendening also tallied and Jake Oettinger made 37 saves for the Stars, who snapped a two-game losing streak.

Travis Konecny scored the lone goal for the Flyers, who went 0-for-6 on the power play en route to losing their third straight game. Philadelphia goaltender Felix Sandstrom turned aside 26 shots.