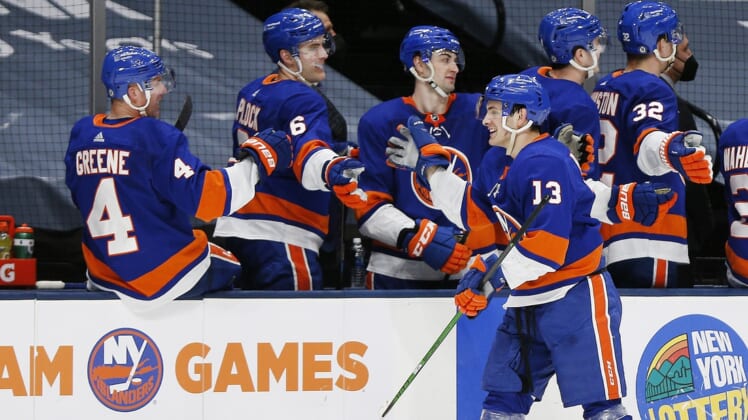 Mathew Barzal racked up three goals and two assists while teammate Jordan Eberle added two goals and an assist as the New York Islanders defeated the Washington Capitals 8-4 on Thursday in Uniondale, N.Y.

Barzal completed his third career hat trick by batting a puck out of the air and in with just over a minute left.

Josh Bailey contributed a goal and two assists for New York, which also got goals from Brock Nelson and Casey Cizikas. Semyon Varlamov made 18 saves in the win. John Carlson led the Capitals with two goals, and Daniel Sprong and T.J. Oshie also scored.

The Islanders improved to 14-1-2 at home this season and snapped a two-game losing streak. They also tied the Capitals and the Pittsburgh Penguins for first place in the East Division.

Alex Wennberg scored less than 90 seconds into overtime and Chris Driedger made 25 saves as Florida beat 3-2 in Sunrise, Fla.

The Panthers, tied with Tampa Bay atop the NHL’s Central Division standings, have won four consecutive games after sweeping their past two series against Dallas and Detroit. Florida also closed out its season series with the Red Wings with six wins in eight games.

Mika Zibanejad scored with 28 seconds remaining in overtime to lift visiting New York past Buffalo. The Sabres had snapped the 18-game losing streak the previous night.

Buffalo’s Tage Thompson forced overtime with 3.6 seconds left in regulation on a wrist shot from the left circle with the extra attacker on.

Colin Blackwell and Filip Chytil also scored for the Rangers, who have won two straight after dropping a pair. Igor Shesterkin made 21 saves. Rasmus Aslund had a goal for the Sabres, who got 44 saves from Dustin Tokarski.

The line of Phillip Danault, Brendan Gallagher and Tomas Tatar combined for six points as visiting Montreal collected a victory over Ottawa. Danault and Gallagher each had a goal and an assist while Tatar had two assists.

Montreal’s Jake Evans also had two assists for his first multi-point game in the NHL. Corey Perry and Paul Byron scored the other goals for the Canadiens, who have won three straight games and are 4-0-2 over their past six games.

Pittsburgh never trailed and got 30 saves from Casey DeSmith to beat host Boston for its fifth consecutive win.

Jason Zucker, Zach Aston-Reese, Mike Matheson and Jake Guentzel scored for the Penguins, who were 0-8-2 in their previous 10 visits to Boston. DeSmith, starting with Tristan Jarry injured, improved to 9-3-0 and allowed two or fewer goals for the seventh straight start.

Brad Marchand scored for the Bruins, and Dan Vladar made 19 saves. Boston lost defenseman Brandon Carlo in the first period to what the team called an upper-body injury.

Brayden Point’s second goal of the game late in the third period lifted Tampa Bay to a 3-2 comeback win over visiting Columbus.

After Lightning rookie Ross Colton tied the game at 2-2 with his third tally of the season at 14:49 of the third, Point skated in from the left and tried a pass across the goal mouth. But the puck clipped the stick of sliding Columbus defender David Savard and went in at 15:54 for the game-winner.

The victory snapped the Lightning’s season-worst three-game losing streak and gave them their NHL-leading 25th win. Zach Werenski and Eric Robinson each had a goal and an assist for the Blue Jackets, and Max Domi assisted on both tallies.

Jesper Fast scored with 29 seconds left in regulation to lift Carolina to a win over host Chicago.

Warren Foegele scored two goals on his 25th birthday, Vincent Trocheck had a goal and an assist, and James Reimer made 22 saves for Carolina, which has won four of five heading into an eight-game homestand.

Dominik Kubalik, Brandon Hagel and Dylan Strome scored and Kevin Lankinen made 27 saves for the Blackhawks, who missed a chance to overtake the Nashville Predators for fourth place in the Central Division.

Goaltender Anton Khudobin made 21 saves for the Stars, who went into the clash with just one win in six games and desperately needed a win to stay in the playoff hunt.

Colton Sissons scored the lone goal for the Predators, who received a 27-save performance from goalie Juuse Saros and saw their six-game winning streak snapped.