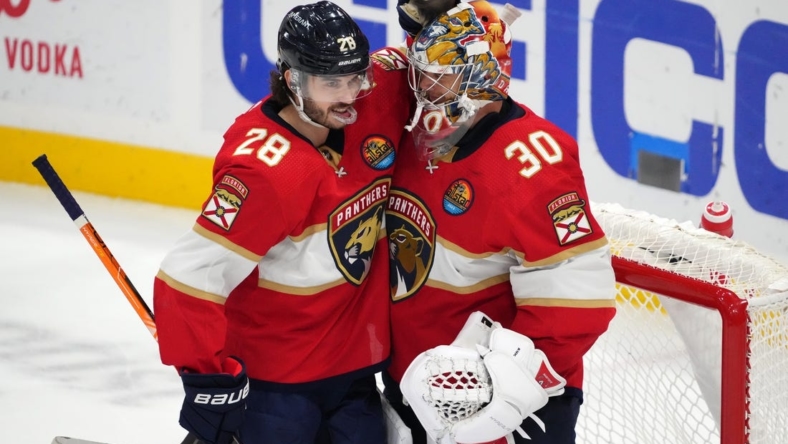 Spencer Knight made 40 saves for his first shutout of the season as the Florida Panthers defeated the Carolina Hurricanes 3-0 on Wednesday in Sunrise, Fla.

It was Knight’s third career shutout in 42 games over parts of three NHL seasons. The 40 stops were a season-high for the 21-year-old goalie, and when Carolina pushed back in the third period, Knight was particularly sharp, stopping 18 shots in the final stanza.

Nick Cousins, Aleksander Barkov and Sam Bennett scored for Florida, which has won back-to-back games despite missing Matthew Tkachuk because of a suspension. Antti Raanta made 33 saves for Carolina, which lost its second straight game. Raanta was filling in for Frederik Andersen, who was injured in practice on Tuesday.

For the 11th time in their NHL careers, and first time since 2016, brothers Eric, Jordan, and Marc Staal played in the same game. Jordan is the Hurricanes captain, while Eric and Marc both play for Florida.

Kirby Dach scored twice, Nick Suzuki tallied less than a minute into the game and Mike Hoffman registered his third goal in two contests as Montreal earned a victory over visiting Vancouver.

The Canadiens’ Sam Montembeault made 31 saves and appeared headed for his second career shutout before Luke Schenn scored 4:45 into the third. Vancouver’s Nils Hoglander put in a rebound with 11:03 left. Canucks goalie Thatcher Demko seemed frazzled at times while stopping 24 shots.

Casey DeSmith made 24 saves to help visiting Pittsburgh snap a seven-game winless streak with a victory over Washington.

Jason Zucker, Brock McGinn and Jeff Petry each scored during a three-goal second period and Jake Guentzel tallied into an empty net in the third for the Penguins. Pittsburgh’s victory was its first since posting a 6-3 win over the Columbus Blue Jackets on Oct. 22.