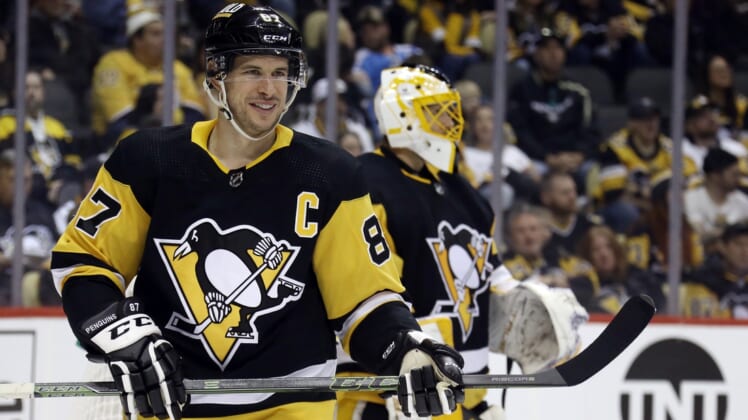 Sidney Crosby scored at 2:21 of overtime Sunday to notch his 1,400th career point as the Pittsburgh Penguins snapped a four-game losing streak with a 3-2 win over the visiting Nashville Predators.

Crosby, playing in his 1,100th game, tipped a feed from Rickard Rakell inside the left post. It was Crosby’s third point of the game, along with an earlier goal and an assist.

Matt Duchene and Nick Cousins scored for the Predators, who have lost two straight.

Paul Stastny, Pierre-Luc Dubois and Kyle Connor all netted one goal and one assist for the Jets (34-28-11, 79 points), who snapped a four-game losing skid. Goaltender Connor Hellebuyck made 31 saves. Winnipeg sits seven points outside a playoff spot with nine games remaining.

Brady Tkachuk scored twice in a three-point game and Josh Norris posted one goal and one assist for the Senators (26-40-6, 58 points), who have lost three straight. Mads Sogaard stopped 21 shots.

Kirill Kaprizov equaled a franchise record for goals while Matt Boldy and Jared Spurgeon collected one goal and one assist as Minnesota collected six unanswered tallies to claim a home win over Los Angeles.

Mats Zuccarello, Marcus Foligno and Nick Bjugstad also scored for the Wild, who erased a 3-0 deficit. Goalie Marc-Andre Fleury made 31 saves after a difficult start for Minnesota, which moved up to second place in the Central Division.

Tampa Bay ended a four-game slide with a win against visiting Buffalo.

Ondrej Palat had a goal and an assist and Brian Elliott made 28 saves for the Lightning, who jumped the Boston Bruins to take over third place in the Atlantic Division.

Craig Anderson made 23 saves for the Sabres, who have lost three straight for the first time since a six-game losing streak Feb. 17-27.

Washington scored two goals in both the second and third periods to top visiting Boston.

Lars Eller gave Washington a 3-2 lead at the 7:18 mark of the third period as he sent a puck toward goal from the left side that deflected off Erik Haula and past Boston goaltender Linus Ullmark. Captain Alex Ovechkin ensured the victory with an empty-net goal in the final seconds of regulation.

The win was the third straight for Washington, while Boston has lost two of three.

Jordan Staal had the first hat trick of the season for Carolina in a win against in Raleigh, N.C.

Andrei Svechnikov had a goal and an assist, Nino Niederreiter had two assists, and Frederik Andersen made 23 saves for the Hurricanes (47-18-8, 102 points), who moved two points ahead of the New York Rangers for first place in the Metropolitan Division with nine games left.

Josh Mahura and Troy Terry scored as John Gibson made 38 saves for the Ducks (29-33-12, 70 points), who were coming off a 5-3 win at the Philadelphia Flyers on Saturday night.

Roope Hintz finished with a goal and two assists, Joe Pavelski and Tyler Seguin each had a goal and an assist, Jamie Benn also scored, and Ryan Suter had two assists. Jake Oettinger made 36 saves for the Stars, who moved two points ahead of the Vegas Golden Knights for the second wild-card berth in the Western Conference.

Kirby Dach had a goal and an assist, Philipp Kurashev, Jonathan Toews and Boris Katchouk also scored, and Patrick Kane had two assists for the Blackhawks. Kevin Lankinen allowed five goals on 20 shots before he was replaced by Collin Delia, who stopped nine of 10 shots.