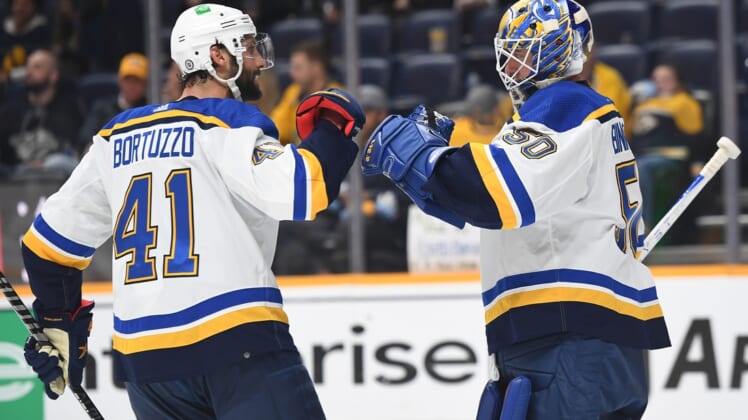 Vladimir Tarasenko chipped in a goal and two assists for the Blues, who have scored four or more goals in their last 12 games while going 11-0-1.

Nick Cousins, Luke Kunin and Dante Fabbro scored for the Predators, who have won just two of their last six games.

Spencer Knight made 33 saves for the Panthers, who have lost only once in their last 14 outings. The highest-scoring team in the league also received goals from Anthony Duclair, Sam Reinhart, Maxim Mamin and Gustav Forsling.

Pius Suter scored for the Red Wings, who were shut out by the New York Rangers on Saturday.

Jared Spurgeon scored two goals, including the game-winner 1:05 into overtime, to lift Minnesota to a win over San Jose in Saint Paul, Minn.

Kevin Fiala finished with a goal and three assists for Minnesota, which clinched a playoff berth for the third season in a row and the 12th time in franchise history. Matt Boldy added a goal and an assist and Dmitry Kulikov also scored for the Wild.

Nick Bonino, Noah Gregor and Rudolfs Balcers each recorded a goal and an assist for San Jose.

Victor Olofsson and Tage Thompson each had two goals and visiting Buffalo swept a back-to-back home-and-home set with Philadelphia.

Rasmus Dahlin and Peyton Krebs each had two assists and Dustin Tokarski made 32 saves for the Sabres, who defeated Philadelphia 4-3 in Buffalo a day earlier.

Kevin Hayes and Noah Cates each had a goal and an assist for the Flyers, who have lost five in a row. Felix Sandstrom made 35 saves.

Michael Bunting had two assists and Jack Campbell made 27 saves for the hosts. Anthony Beauvillier and Josh Bailey scored for New York, which will miss the Stanley Cup playoffs after reaching the NHL semifinals each of the past two years.

Troy Terry scored twice and Derek Grant tallied once as part of three-point games for each to guide host Anaheim past Columbus.

Trevor Zegras, Gerry Mayhew and Cam Fowler all collected one goal and one assist for the Ducks. Goaltender John Gibson made 31 saves.