Brandon Tanev scored twice and Alex Wennberg and Jared McCann each had a goal and an assist as the Seattle Kraken won for the first time in franchise history, defeating the host Nashville Predators 4-3 Thursday night.

Wennberg netted the go-ahead goal at 9:54 of the second period, breaking a 2-2 tie. Tanev scored an empty-net goal at 18:39 of the third to give Seattle a 4-2 lead. Granlund scored on a rebound with 39.9 seconds left, but the Predators couldn’t get the equalizer.

Goaltender Philipp Grubauer made 27 saves as the Kraken, who lost their opener by the same score Tuesday in Las Vegas, held on despite being outshot 13-1 in the third period.

Mikael Granlund had a goal and two assists for Nashville, which was playing its first game of the season. Eeli Tolvanen and Roman Josi also scored and Juuse Saros stopped 22 of 25 shots.

Palat and Steven Stamkos scored two goals apiece, while Alex Killorn scored the tying goal late in regulation. Nikita Kucherov had a goal and three assists and Ross Colton also scored for the Lightning, who lost their opener to Pittsburgh on Tuesday.

Bertuzzi, who missed most of last season due to a back injury, had a second-period hat trick. Dylan Larkin and Vladislav Namestnikov scored the other Detroit goals and Moritz Seider collected his first two NHL assists.

Andrei Svechnikov posted two goals and an assist and Teuvo Teravainen had a goal and an assist as Carolina defeated visiting New York in the season opener for both teams in Raleigh, N.C.

Zemgus Girgensons and Victor Olofsson both collected one goal and one assist to lead host Buffalo to a victory over Montreal in their season opener.

Kyle Okposo, Anders Bjork and Tage Thompson also tallied for the Sabres, and veteran goaltender Craig Anderson made 30 saves in his debut with the team. Colin Miller, Jeff Skinner and Jacob Bryson all netted a pair of assists in the victory.

Chris Wideman replied for the Canadiens, who reached the Stanley Cup Final last season but have dropped their first two games to start the campaign. 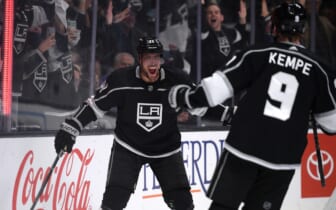 Oliver Bjorkstrand had two goals and two assists as Columbus routed visiting Arizona, giving coach Brad Larsen a win in his debut as Coyotes coach Andre Tourigny took the loss in his.

Max Domi tallied a goal and two assists and Zach Werenski had a goal and an assist for the Blue Jackets (1-0), who set a franchise record for goals in a home opener. Alexandre Texier, Boone Jenner, Jake Bean and Gustav Nyquist also scored for Columbus, and Elvis Merzlikins made 36 saves.

Anton Stralman and Clayton Keller scored for the Coyotes (0-1). Carter Hutton allowed eight goals on 26 shots in his Arizona debut.

Carter Verhaeghe scored two goals — including the winner 1:37 into overtime — to lead host Florida to a season-opening win over Pittsburgh.

Florida also got two goals from Aaron Ekblad and one from Anthony Duclair, as well as 43 saves from Sergei Bobrovsky.

The Penguins, who trailed 2-0 midway through the second period, got four straight goals from Danton Heinen, Jeff Carter, Guentzel and Evan Rodrigues.

Heiskanen’s defensive play and game winner capped a night when the Stars squandered a 2-0 lead and lost starting goaltender Braden Holtby to an undisclosed injury midway through the third. Rookie Jacob Peterson and Radek Faksa tallied power-play goals for the Stars.

Defenseman Adam Fox and left winger Chris Kreider scored in a span of about seven minutes in the second for the Rangers, who had 18 shots in the middle period.

Ottawa scored three goals in the first period and held on for a season-opening victory over visiting Toronto.

Anton Forsberg, starting in goal because Matt Murray was ill, made 46 saves for Ottawa. Tyler Ennis had a goal and an assist, and Chris Tierney and Alex Formenton added goals for the Senators.

Jason Spezza and William Nylander each had a goal and an assist for the Maple Leafs, who won their opener Wednesday over the Montreal Canadiens. Petr Mrazek stopped 23 shots for Toronto before he suffered a groin injury late in the second period. Jack Campbell replaced him in the third and stopped all 10 shots he faced.