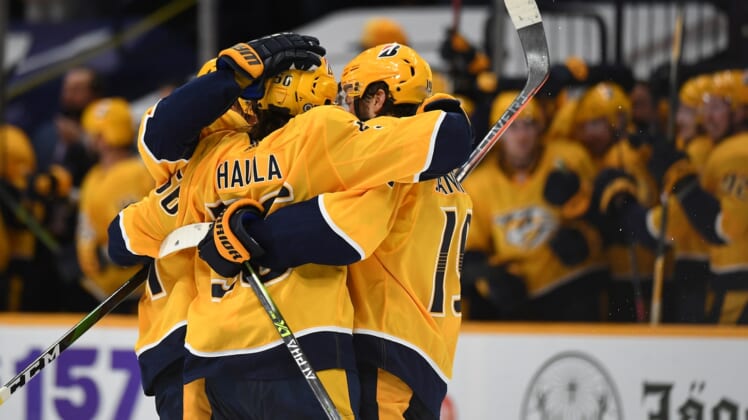 Luke Kunin scored two goals and the host Nashville Predators sealed a playoff spot with a 3-1 win over the Central Division champion Carolina Hurricanes on Saturday.

Predators goaltender Juuse Saros made 21 saves and held a shutout into the third period in what was a preview of a first-round postseason series. The teams conclude the regular season with a rematch Monday night in Nashville.

Kunin scored in the second and third periods for a 2-0 Predators lead. Mikael Granlund assisted on both goals.

Carolina’s goal came from Morgan Geekie less than 1 1/2 minutes after Kunin’s second goal, but Erik Haula sealed the outcome with an empty-net tally. Carolina goalie Alex Nedeljkovic made 27 saves while taking a loss in regulation for the first time in his past nine outings.

The Maple Leafs won the final two regular-season games between the teams to take the season series 7-2-1. Jack Campbell made 21 saves for the victory.

Pierre Engvall, William Nylander and Mitchell Marner scored for the Maple Leafs. Brett Kulak and Nick Suzuki scored for the Canadiens, who got 23 saves from Jake Allen.

Jeff Carter scored and goaltender Maxime Lagace stopped all 29 shots he faced to lead Pittsburgh past visiting Buffalo as both teams concluded the regular season.

Several hours later, Pittsburgh clinched the East Division and home-ice advantage for the first round of the playoffs. The Penguins secured first place after they won and the Washington Capitals failed to record a regulation-time victory against the Philadelphia Flyers.

The Sabres finished last not only in the East but also overall in the NHL. Buffalo rookie goalie Michael Houser, pressed into the No. 1 role because of a series of injuries, made 22 saves in his fourth career start.

Alex Wennberg scored three goals to lead Florida past Tampa Bay in Sunrise, Fla., and into a two-point lead on the Lightning in the race for home-ice advantage in their Stanley Cup playoffs first-round series.

The teams amassed a combined 156 minutes of penalty time and nine misconduct penalties. Luke Schenn scored for the Lightning, and Andrei Vasilevskiy took the loss with 30 saves.

Lars Eller scored with 40 seconds left in regulation to force overtime. On the game-winner, Sheary took a quick pass from Nic Dowd and fired a shot that trickled between goalie Alex Lyon’s pads.

The injury-depleted Capitals were even more short-handed in this contest. T.J. Oshie appeared to hurt his knee late in the second period and was ruled out with a lower-body injury, leaving Washington with only 10 forwards during the third period and overtime.

Mika Zibanejad, Alexis Lafreniere and Vitali Kravtsov scored in a span of less than five minutes during a four-goal third period, and New York completed its season with a victory at Boston.

Zibanejad scored again late, K’Andre Miller also had a goal and Pavel Buchnevich had three assists as the Rangers snapped a five-game losing streak. Keith Kinkaid had 28 saves before exiting during the third with an injury. Igor Shesterkin stopped seven shots the rest of the way for New York.

Brock Nelson scored twice in a span of 3:40 in the second period as New York scored four unanswered goals in a rout of visiting New Jersey in the final regular-season game at Nassau Coliseum in Uniondale, N.Y.

Jordan Eberle scored late in the first period, and Nelson struck twice by swatting in a pair of rebounds after New Jersey’s Andreas Johnsson tied the game less than five minutes into the second. Former Devil Kyle Palmieri and Mathew Barzal scored in a span of 37 seconds early in the third as the Islanders halted a three-game losing streak.

The Islanders moved within two points of the third-place Bruins. The Islanders visit Boston on Monday night for their final regular-season game, but the Bruins also visit the Capitals on Tuesday night.

Connor Brown also scored and added two assists, Shane Pinto collected two assists and Filip Gustavsson made 27 saves for the Senators. Ottawa, which has long been eliminated from playoff contention, is on an 8-1-1 run.

Mason Appleton and Mark Scheifele scored for the Jets, who have lost eight of nine games but remain in third place in the North Division. Goalie Connor Hellebuyck stopped 19 shots.

Domi scored from the slot off a feed from Oliver Bjorkstrand. Cam Atkinson, Bjorkstrand, Eric Robinson and Jack Roslovic scored in regulation for Columbus.

Victor Rask scored with 2:14 left in the extra session to lift Minnesota past Anaheim in St. Paul, Minn.

Jared Spurgeon, Ryan Hartman and Nick Bonino also scored, and Cam Talbot made 19 saves for the Wild, who finished 7-1-0 against the Ducks this season. Kirill Kaprizov had two assists for his 13th multi-point game, adding to his franchise rookie records.

Rickard Rakell and Max Comtois each had a goal and an assist for the Ducks. Ryan Miller made 21 saves in the final game of his 18-year NHL career.