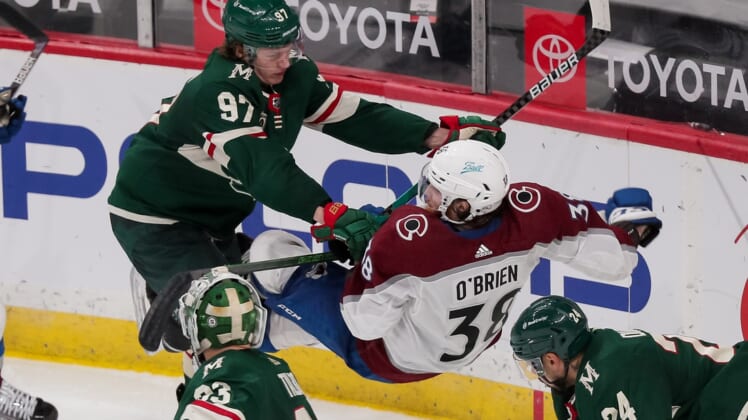 Kevin Fiala scored his first career hat trick and also had an assist as the Minnesota Wild snapped Colorado’s 15-game point streak with an 8-3 victory on Wednesday night in Saint Paul, Minn.

The eight-goal game was the fifth in Wild history, matching the franchise record. Minnesota’s Cam Talbot made 29 saves to improve to 6-1-1 in his last eight starts.

Nathan MacKinnon and Mikko Rantanen each had a goal and an assist, Andre Burakovsky added a goal and Cale Makar had two assists for Colorado. The Avalanche had a five-game winning streak snapped and failed to gain a point in a game for the first time since a 3-2 home loss to Arizona on March 8, ending a 13-0-2 run.

Zach Hyman and Auston Matthews each had a goal and an assist on a milestone night for Jack Campbell as host Toronto turned back Montreal for its fifth straight win.

Campbell stopped 32 of 34 shots, improving his record to a perfect 10-0-0. The 10-game winning streak is the longest by a goalie in Maple Leafs franchise history, and it ties an NHL record for longest win streak to start a season.

T.J. Brodie also scored for Toronto. It was Brodie’s first goal since joining the Maple Leafs as a free agent last October. Corey Perry scored both of Montreal’s goals for his first multi-goal outing of the season. Jake Allen stopped 29 of 32 shots for Montreal.

Drew Doughty assisted on the tying and winning goals to help Los Angeles rally for a comeback win against visiting Arizona after entering the third period trailing 3-1.

Carl Grundstrom tipped in a shot from Doughty with 6:05 left for the winner. Jaret Anderson-Dolan, Adrian Kempe and Jeff Carter also scored while Jonathan Quick made 24 saves for the Kings, who avoided losing four in a row. Kale Clague and Trevor Moore joined Doughty by logging two assists apiece.

Arizona’s Lawson Crouse had a goal and an assist, Ilya Lyubushkin and Johan Larsson also scored, and Jakob Chychrun and Christian Fischer each had two assists. Adin Hill made 26 saves in his eighth straight start for the Coyotes, who fell short in a bid for their first four-game winning streak of the season.

Leon Draisaitl collected a hat trick in a four-point game while Connor McDavid scored one goal — the third-period, game-winning tally — and added three assists to lead visiting Edmonton past Ottawa.

Oilers goaltender Mikko Koskinen made 28 saves, the biggest in the final minute against Tim Stutzle while it was a one-goal game. Edmonton tied a franchise record with eight consecutive wins over the Senators this season.

Josh Norris and Connor Brown scored for the Senators. Goaltender Marcus Hogberg, playing his first game since Feb. 18, stopped 31 of 34 shots in the loss.

Vladimir Tarasenko scored in the opening minute and Sammy Blais added a first-period goal as host St. Louis defeated Vegas to end a seven-game losing streak and a four-game skid against the Golden Knights.

Jordan Binnington was huge in goal with 50 saves, helping the Blues snap an 0-6-1 skid. The brutal stretch saw St. Louis fall out of a playoff position in the West Division. The Blues’ Jake Walman scored his first career goal with 6:29 remaining in the game. The defenseman’s score came in his 12th career game.