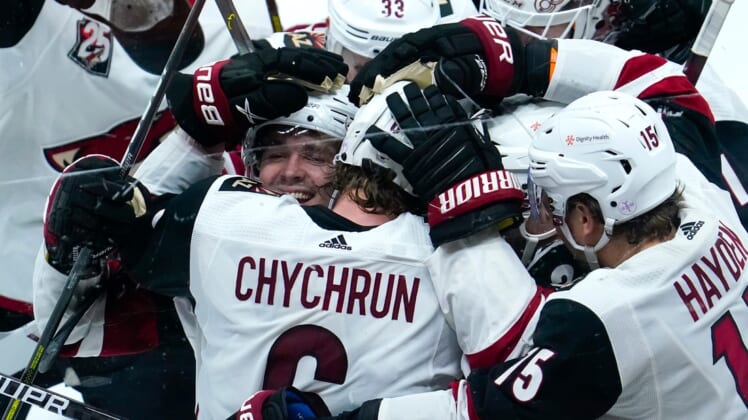 Jakob Chychrun delivered a hat trick, getting the game-tying score with less than five minutes remaining in regulation and the game-winner in overtime, as the Arizona Coyotes rallied for a 3-2 victory Sunday over the host Anaheim Ducks.

Chychrun’s game-winner, from the top of the right circle, came with 3:13 remaining in the extra period as Arizona strengthened its hold on fourth place in the West Division. Adin Hill had 18 saves for the Coyotes.

Sam Carrick and Derek Grant each scored first-period goals for Anaheim, but the Ducks were unable to hold off the Coyotes late.

Rookie Trevor Zegras had the primary assist on both Anaheim goals, while goaltender John Gibson returned from an upper-body injury to make 28 saves.

Alex Ovechkin collected another milestone goal when he scored on the power play to cap a three-goal flurry spanning the first and second periods for Washington, which completed a season sweep of New Jersey in Newark, N.J.

The power-play goal for Ovechkin was his 265th, which ties him for second all-time with Brett Hull, nine goals behind Dave Andreychuk. It was also Ovechkin’s 725th goal, pulling him within six of Marcel Dionne for fifth all-time.

Washington won despite being outshot 39-19 as it broke a tie for first place in the East Division with the idle New York Islanders. Travis Zajac scored twice and Yegor Sharangovich and Jesper Bratt scored later for the Devils, who went winless (0-6-2) in eight games against an opponent for the first time.

Dylan Larkin broke an 11-game goalless drought as Detroit won on Florida’s west coast for the first time in more than a decade, routing Tampa Bay.

Tampa Bay’s Victor Hedman scored in his 800th NHL game, Anthony Cirelli skated in his 200th and Steven Stamkos and Cal Foote had assists for the Lightning. Goalie Chris Gibson made his first start in three seasons and just his 15th NHL appearance overall. He stopped 13 of 17 shots in his Tampa Bay debut.

The Panthers, who are No. 1 in the NHL with 56 points, extended their season-high winning streak to six games.

It was Driedger’s second shutout of the season and his first since blanking the Nashville Predators on March 20. At 11-4-2, he also extended his high in wins in a season. He won seven games a season ago.

Petr Mrazek made 28 saves in his first game in more than two months as Carolina topped visiting Dallas.

Mrazek’s third shutout of the season came against the last team he faced. He played for the first time since suffering a thumb injury on Jan. 30 against Dallas.

John Tavares scored in the third period to break a tie and Toronto went on to defeat host Calgary for its third straight win.

Tavares and Auston Matthews each finished with a goal and an assist for the Maple Leafs. Morgan Rielly and Alex Galchenyuk also scored for Toronto, and goaltender Michael Hutchinson stopped 32 shots.

Joakim Nordstrom and Andrew Mangiapane scored for the Flames, who had 26 saves from David Rittich.