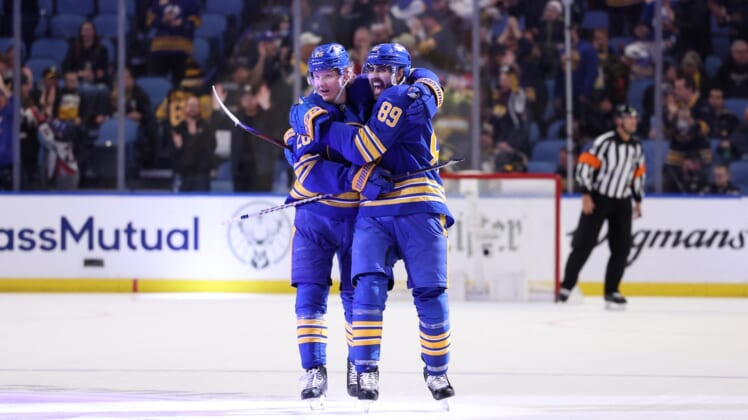 Tage Thompson, who scored twice in regulation, and Alex Tuch scored in a shootout to give the Buffalo Sabres a 4-3 win over the visiting Pittsburgh Penguins on Wednesday night.

Sabres goaltender Craig Anderson stopped both shooters he faced in the shootout and made 23 saves through regulation and overtime.

Zemgus Girgensons also scored for the Sabres, who have won three in row for the first time since the opening three games of the season.

Sidney Crosby and Evgeni Malkin each had a goal and assist, Kris Letang scored and Bryan Rust had two assists for the Penguins, who had won three straight.

J.T. Miller had a goal and an assist while Bo Horvat and Brock Boeser also scored as Vancouver beat Colorado in Denver.

Jaroslav Halak had 32 saves and Tanner Pearson added two assists for the Canucks, who had won just one of their previous six games (1-3-2). Nazem Kadri scored a goal and Darcy Kuemper stopped 24 shots for the Avalanche, whose four-game winning streak ended.

Andrew Cogliano, who was acquired on Monday from the San Jose Sharks, made his Colorado debut, but Artturi Lehkonen still has to work out immigration issues before he can play. The Avalanche got Lehkonen from the Montreal Canadiens at the trade deadline.

Ilya Mikheyev also had a short-handed goal for Toronto. Mitchell Marner had the Maple Leafs’ other goal. Nico Hischier produced a goal and an assist for the Devils, and Damon Severson added a goal.

Petr Mrazek, who cleared waivers on Monday, made 20 saves for Toronto. Nico Daws, playing for the second night in a row, stopped 28 shots for New Jersey. He played Tuesday night in a 7-4 win over the New York Rangers.

Dylan Strome scored the go-ahead goal with 3:50 remaining and Patrick Kane had a goal and two assists to lead visiting Chicago past Anaheim. Strome collected his ninth goal in the past nine games, and he also had an assist.

Chicago’s Alex DeBrincat, who sealed the win on an empty-netter with 1:03 to go, had two points. Taylor Raddysh also scored while Kevin Lankinen made 27 saves for the Blackhawks, who snapped a three-game losing streak.