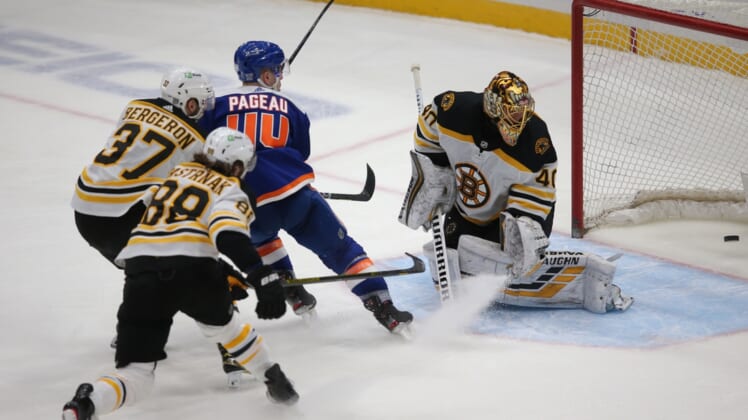 Mathew Barzal scored a tiebreaking power play goal 5:30 into the third period Saturday night for the host New York Islanders, who went on to snap the Boston Bruins’ 10-game point streak with a 4-2 win in Uniondale, N.Y.

Jean-Gabriel Pageau scored twice, including a short-handed goal that iced the victory with 5:28 left. Jordan Eberle also scored for New York, which has won three of four. Goalie Semyon Varlamov made 28 saves.

Brad Marchand and Patrice Bergeron scored for the Bruins, who lost in regulation for just the second time this season. The Islanders also earned a 1-0 win over visiting Boston on Jan. 18. Goalie Tuukka Rask recorded 38 saves for Boston, which went 9-0-1 during its point streak.

It was Pageau’s first two-goal game with the Islanders and the eighth of his career.

Vincent Trocheck scored in the third round of a shootout and Alex Nedeljkovic denied all three attempts to fuel Carolina’s defeat of host Dallas.

Nedeljkovic (26 saves) thwarted Jason Robertson in the first shootout round and alertly pokechecked the puck away from Joe Pavelski in the second. Trocheck solved Jake Oettinger (18 saves) to begin the third before Nedeljkovic stopped Denis Gurianov to seal the win.

Carolina captain Jordan Staal scored his second goal in as many games, and Jordan Martinook and Teuvo Teravainen each scored his first goal of the season for the Hurricanes. Jason Dickinson, Jason Robertson and Pavelski scored in regulation for the skidding Stars, who have dropped five in a row (0-2-3) and seven of their past eight games (1-3-4).

Brady Tkachuk scored with 8.2 seconds remaining as visiting Ottawa snapped a four-game losing streak with a victory against Winnipeg.

Evgenii Dadonov also scored for the Senators and goaltender Marcus Hogberg, filling in for the injured Matt Murray, made 30 saves. It was Ottawa’s first win in five games against the Jets this season.

Mark Scheifele scored the lone goal for Winnipeg and Connor Hellebuyck stopped 27 of 29 shots. The Jets had won three of their previous four games.

Jonathan Marchessault, Mark Stone, and Chandler Stephenson found the back of the net for the Golden Knights as netminder Marc-Andre Fleury tallied 24 saves. Tomas Hertl scored the lone goal for the Sharks as Martin Jones made 23 saves.

The Sharks also lost one player to injury when defenseman Radim Simek was checked from behind and then cross-checked in the ribs by Marchessault. The Czech blueliner exited the game following that shift and did not return. Marchessault was not penalized for the cross-check.

Mathieu Joseph and Ondrej Palat each had a goal and an assist, and Alexander Volkov and Barclay Goodrow also found the net for the Lightning. It was the first NHL goal for Volkov, 23. Tampa Bay scored four goals in the second period to break open a scoreless tie.

Florida’s Sergei Bobrovsky made 22 saves but lost in regulation for the first time this season (5-1-1). Frank Vatrano got the Panthers’ only goal. The teams have split the first two games of the series, both in Sunrise. The finale of the three-game set between in-state opponents is scheduled for Monday night in Tampa.

Brendan Gallagher scored late in the third period to snap a tie as Montreal came back to win at Toronto. Gallagher knocked down a shot from defenseman Jeff Petry before shooting home his sixth goal of the season at 16:53 of the third.

Mitchell Marner scored for the Maple Leafs, who had their winning streak stopped at four games. Auston Matthews extended his point streak to 12 games with an assist, and Toronto goalie Frederik Andersen stopped 23 shots.

Alex DeBrincat scored the winning goal 35 seconds into overtime as host Chicago completed a comeback to knock off Columbus.

Kevin Lankinen made 29 saves for the Blackhawks, who earned an OT victory for the third time in their past four games overall. Carl Soderberg scored the tying goal with 3:45 left in regulation, off the assist from Philipp Kurashev. Nicolas Beaudin also scored for Chicago.

Cam Atkinson had a goal and an assist and Patrik Laine also scored for Columbus. Joonas Korpisalo stopped 28 shots for the Blue Jackets.

Tyler Myers scored a late game-winning goal and host Vancouver snapped a six-game losing skid with a victory over Calgary.

With overtime looming despite Vancouver dominating from start to finish, Myers intercepted the puck in the neutral zone, worked into the zone, made it to the slot and found the mark with 5:11 remaining in regulation for a 2-1 lead. Brandon Sutter rounded out the scoring with an empty-net goal.

Luke Glendening had a goal and two assists to lead Detroit to a victory at Nashville. Robby Fabbri supplied a goal and an assist, and Adam Erne and Anthony Mantha also scored for the Red Wings.

Winning goaltender Jonathan Bernier made 21 saves. Bernier was playing his second game since Jan. 28 after recovering from an upper-body injury.

Filip Forsberg and Rocco Grimaldi scored the Predators’ goals, and Dante Fabbro had two assists. Juuse Saros replaced Pekka Rinne in goal at the start of the third period. They combined for 26 saves.

Dryden Hunt, Nick Schmaltz, Barrett Hayton and Conor Garland scored for the Coyotes, and Antti Raanta made 30 saves. The contest was the sixth consecutive meeting between the two teams due to COVID-19 postponements elsewhere. They will face off for the seventh straight time Monday.