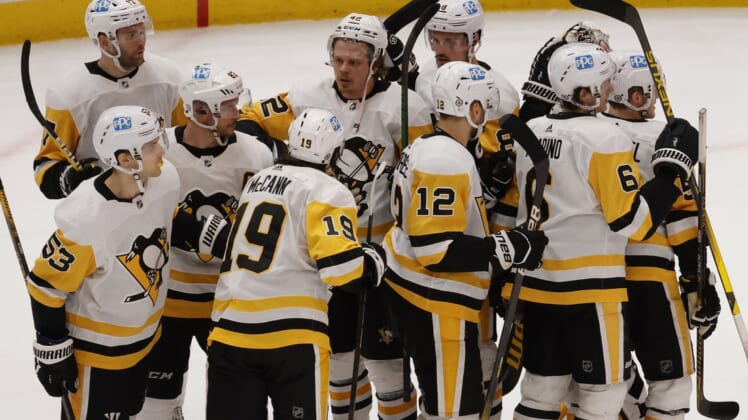 Jake Guentzel scored 2:11 into overtime and gave the visiting Pittsburgh Penguins a 5-4 victory over the Washington Capitals on Thursday night as both East Division rivals clinched playoff berths.

The two teams, who are tied for first in the division, claimed their postseason spots in tandem with the fifth-place New York Rangers’ 4-0 loss to the New York Islanders on Thursday. For the Penguins, it marks their 15th consecutive playoff berth — the longest active streak in North American sports leagues.

Washington sent the game into overtime on a Tom Wilson goal with 14.3 seconds left before Guentzel redirected a John Marino pass past goalie Vitek Vanecek.

Andrei Vasilevskiy stopped 20 shots to continue his dominance of Dallas, backstopping host Tampa Bay to his fifth shutout of the season and NHL-best 30th win.

Vasilevskiy shut out the Stars for the third time this season and ran his record to 5-0-1 against them. Tampa Bay won its fourth straight to strengthen its position as it competes with the Carolina Hurricanes and Florida Panthers for the Central Division crown.

Ryan O’Reilly’s second goal of the game came in overtime and lifted St. Louis over Minnesota in Saint Paul, Minn., strengthening the Blues’ hold on fourth place in the West Division.

Sammy Blais, Tyler Bozak and Marco Scandella also scored while goaltender Ville Husso made 26 saves for the Blues, who blew a 3-0 lead but recovered to win a fourth straight game.

Sam Bennett scored with 52 seconds left in overtime as Florida remained two points in back of the Central Division lead by beating host Chicago.

Alex Wennberg, Anthony Duclair and Brandon Montour scored in regulation for the Panthers, and rookie goalie Spencer Knight made 24 saves.

Elias Lindholm scored twice and goaltender Jacob Markstrom delivered another sparkling performance to give Calgary a victory over host Edmonton and provide more life for its flickering playoff hopes.

Dillon Dube also scored for the Flames. Markstrom stopped 30 shots — 14 in the third period — in a win that pulled Calgary within four points of the Montreal Canadiens for fourth place in the North Division. Matthew Tkachuk and Rasmus Andersson both collected two assists.

James Neal scored and goaltender Mike Smith stopped 27 shots for the Oilers, who sit second in the West. Edmonton superstar Connor McDavid, who leads the league’s scoring race, was held without a point for the second consecutive clash with Calgary.

Pavel Zacha had one goal and one assist while Jesper Bratt and Jesper Boqvist added a goal apiece for the Devils, who won their second in a row following a 10-game losing streak.

Scott Laughton, Travis Konecny and Sean Couturier scored one goal each for the Flyers, who were mathematically eliminated from playoff contention. Jake Voracek added two assists.

David Krejci and Brad Marchand each had a goal and an assist as host Boston beat Buffalo. The game was tied 2-2 seven minutes into the third period before the Bruins scored three unanswered goals.

Taylor Hall, David Pastrnak and Charlie Coyle scored the Bruins’ other goals, with Pastrnak giving Boston an early lead just 1:16 into the game. Craig Smith had two assists for the Bruins, and Tuukka Rask made 29 saves.

Reinhart and Casey Mittelstadt scored for the Sabres, and Ukko-Pekka Luukkonen stopped 35 shots.

Oliver Wahlstrom, Anthony Beauvillier and Mathew Barzal also scored for the Islanders, who moved seven points ahead of the fifth-place Rangers in the East Division.

Igor Shesterkin recorded 23 saves for the Rangers, who lost for just the third time in 10 games.

J.T. Miller scored for the Canucks, who have lost three in a row. Canucks goaltender Braden Holtby stopped 20 shots.

Teuvo Teravainen had a goal and an assist in just his second game back following a lengthy injury-related absence as Carolina topped Detroit in Raleigh, N.C. The Hurricanes extended their points streak to nine games (6-0-3).

Jakub Vrana scored the lone goal for the Red Wings, who are 1-3-3 in their past seven games. Jonathan Bernier stopped 29 shots.