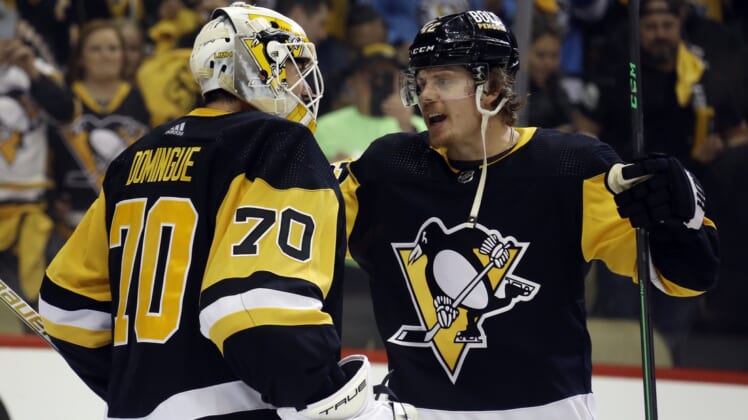 Danton Heinen scored a tiebreaking goal at 11:02 of the third period Saturday as the Pittsburgh Penguins downed the visiting New York Rangers 7-4 for a 2-1 first-round playoff series lead.

After the Rangers erased a three-goal deficit to tie it 4-4, Heinen caught up with a loose puck that squirted out of a tangle in the corner and, from the right circle, ripped it between the pads of goaltender Alexandar Georgiev.

Jake Guentzel and Jeff Carter, with his second of the game, added empty-netters to seal it.

Evan Rodrigues had two goals and an assist, Brock McGinn also scored, and Mike Matheson added three helpers and Sidney Crosby two for the Penguins. Pittsburgh goaltender Louis Domingue made 32 saves and had an assist.

Goalie Ilya Samsonov made 29 saves for his first playoff victory as Washington defeated visiting Florida to gain the series lead against the NHL’s No. 1 team.

The eighth-seeded Capitals lead the best-of-seven series 2-1 against the top-seeded Panthers, who won the Presidents’ Cup as the NHL’s top team in the regular season. Game 4 is set for Monday night in Washington D.C.

Gabriel Landeskog had two goals and two assists as visiting Colorado pushed Nashville to the brink of elimination.

The Avalanche lead the best-of-seven series 3-0.

Colorado goalie Darcy Kuemper left the game with 57 seconds remaining in the first period when the stick of Predators forward Ryan Johansen caught him through his mask. He stopped nine of 10 shots. Pavel Francouz came on in relief and made 18 saves.

Joe Pavelski scored twice, including the game-winning goal midway through the third period, to lead host Dallas to a victory over Calgary in Game 3 of their Western Conference first-round series.