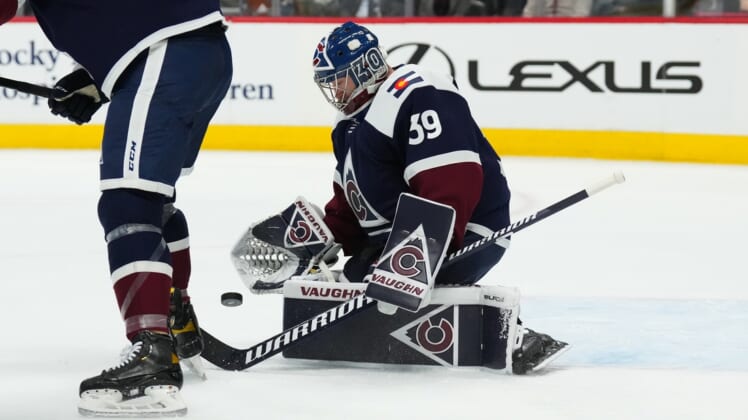 Pavel Francouz had 24 saves for his second shutout in as many starts and the Colorado Avalanche beat the Chicago Blackhawks 2-0 in Denver on Monday night.

Nazem Kadri and Mikko Rantanen scored goals for the Avalanche, who have won 16 in a row at home and seven straight overall.

Colorado tied the 1975-76 Boston Bruins for the fifth-longest home winning streak in league history. It is also the longest streak since the Detroit Red Wings won an NHL-record 23 straight at home from Nov. 5, 2011-Feb. 19, 2012.

Marc-Andre Fleury had 27 saves for the Blackhawks, who have lost all three games to Colorado this season with one more left between the teams. Chicago is 0-2-2 in its past four games.

Robin Lehner made 34 saves for his first shutout of the season and visiting Vegas extended its road win streak to seven games with a shutout victory over Washington.

It was the 17th career shutout for Lehner. Michael Amadio, playing in his 200th NHL game, scored his first career game-winning goal for Vegas. The win was the second straight for Vegas, its first two-game win streak this month.

Vitek Vanecek stopped 28 of 29 shots for the Capitals, who dropped to 3-5-2 over their last 10 games. It marked the first time this season that Washington was shut out.

Adam Fox scored the game-winner in the sixth round of a shootout as New York beat Los Angeles to extend its home winning streak to five games.

The Rangers’ Chris Kreider scored his league-leading 30th goal with 1.5 seconds left in the first period, earning a goal in his sixth consecutive game. Barclay Goodrow also scored for the Rangers, and Igor Shesterkin made 34 saves to win his seventh straight start.

Blake Lizotte and Alex Iafallo produced the Kings’ goals. Jonathan Quick finished with 28 saves, including 26 after the first period and 13 during New York’s five power plays.

Johnny Gaudreau collected one goal during his second four-point game in three outings and Matthew Tkachuk recorded five assists to lead host Calgary to a thrashing of St. Louis.

Tyler Bozak replied for the Blues, and Jordan Binnington made 28 saves on 35 shots before giving way to Ville Husso for the third period. Husso stopped all 13 shots he faced in relief.

Roope Hintz had a goal and an assist, Jacob Peterson and Joe Pavelski each scored a goal and Dallas won at Philadelphia, extending the Flyers’ winless streak to a franchise-record-tying 12 games.

Jake Oettinger made 27 saves for the Stars, who improved to 3-0-0 on a road trip that concludes Tuesday against the New Jersey Devils.

Ivan Provorov scored the lone goal for the Flyers, who have dropped 12 in a row. The current winless mark with nine regulation defeats and three overtime losses matches a winless streak in 1998-99 of eight losses and four ties. Keith Yandle appeared in his 964th consecutive game, tying the longest streak in NHL history.

Ryan Getzlaf had a goal and an assist to help visiting Anaheim to victory against Boston.

Hampus Lindholm tied his NHL career high with three assists, and John Gibson made 23 saves for the Ducks, who are coming off a 5-1 win against the visiting Tampa Bay Lightning on Friday after losing four straight. The Ducks scored the first two goals and never surrendered the lead in the opener of the five-game road trip.

David Pastrnak had a goal and an assist, Taylor Hall and Erik Haula also scored, and Tuukka Rask made 22 saves for the Bruins, who had won seven of their previous eight games.

Nico Sturm had a goal and two assists, Connor Dewar scored his first career goal and had an assist, and Minnesota stormed past Montreal in St. Paul.

Jared Spurgeon, Mats Zuccarello, Kevin Fiala and Matt Boldy each notched a goal and an assist for the Wild, who posted a season high in goals. Jordie Benn and Marcus Foligno also scored for Minnesota, which won its third in a row.

Mike Hoffman and Rem Pitlick scored for Montreal, which is winless in its last three (0-1-2).