Patrice Bergeron matched a franchise record with a trio of power-play goals and scored four total to help the Boston Bruins skate past the visiting Detroit Red Wings 5-1 on Thursday night.

Bergeron had been held without a goal during the Bruins’ first seven games. The Boston captain became the fifth player in team history to record a hat trick at age 36 or older, joining Hall of Famer Johnny Bucyk (six times), Jean Ratelle, Dit Clapper and Dave Andreychuk.

The Islanders are on a six-game (4-0-2) points streak, with all of those games coming away from home. Anthony Beauvillier matched a career best with three assists, Jean-Gabriel Pageau had a goal and an assist, and Oliver Wahlstrom also scored as part of New York’s four-goal second period.

Nick Suzuki and Tyler Toffoli scored third-period goals for the Canadiens, who had lost three of four.

Letang was making his return from a four-game absence with COVID-19. Pittsburgh’s Sidney Crosby, Brian Dumoulin, Marcus Pettersson and Chad Ruhwedel, and coach Mike Sullivan were all absent after testing positive for the coronavirus.

Brock McGinn and Jake Guentzel also scored for the Penguins, and Pittsburgh goaltender Tristan Jarry made 36 saves. Travis Konecny and Scott Laughton scored and Carter made 33 saves for the Flyers.

John Tavares tied the game for Toronto in the final minute of regulation. Pat Maroon had put Tampa Bay on top in the first period.

Toronto went on the power play when Victor Hedman was called for slashing 57 seconds into the extra session. Nylander fired the game-winner from the left circle to extend Toronto’s winning streak to four games.

In a game that featured four goaltenders, Aleksander Barkov scored two goals as Florida remained hot with an overtime win over Washington in Sunrise, Fla. The Panthers have yet to lose in regulation this season.

The winning goal, which came with 3:05 left in OT, was credited to Eetu Luostarinen, as his pass went in off the stick of Washington’s Tom Wilson.

Barkov has seven goals this season, including five in his past three games. He also has 188 career goals, tying him with Olli Jokinen for the most in Panthers history. Washington’s Alex Ovechkin scored his league-leading 10th goal of the season. His 740 career goals place him one behind Brett Hull for fourth place on the all-time NHL list. 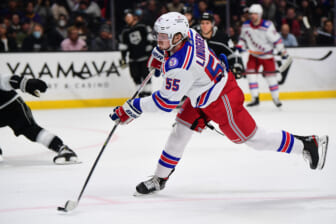 Jonathan Marchessault scored two goals and Robin Lehner made 38 saves to lead visiting Vegas past Ottawa for its fourth win in five games.

William Carrier, Brett Howden and Alex Pietrangelo also scored for the Golden Knights, who improved to 4-0-0 all-time at Ottawa.

Brady Tkachuk scored for the Senators, who lost for the sixth time in seven games. Filip Gustavsson finished with 34 saves.