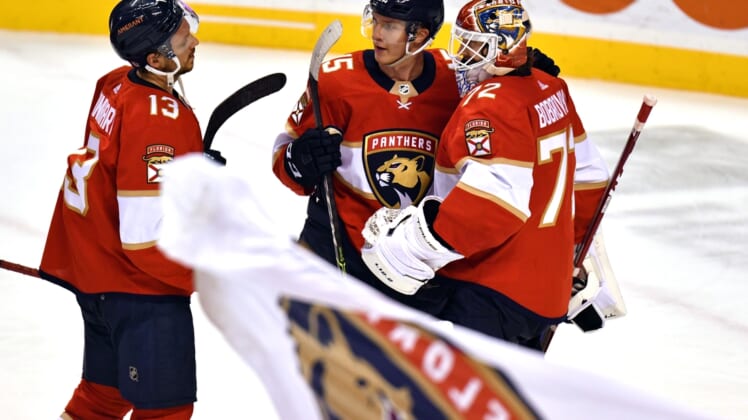 Mason Marchment had a goal and an assist as the Florida Panthers clinched the Atlantic Division title and the best record in the Eastern Conference with a 5-2 victory over the Detroit Red Wings on Thursday in Sunrise, Fla.

Aleksander Barkov and Sam Reinhart netted power-play goals and Noel Acciari and MacKenzie Weegar scored for the Panthers, who won for the 10th consecutive time at home.

Sergei Bobrovsky made 28 saves for his 38th triumph to tie Nashville’s Juuse Saros for the NHL lead. The Red Wings got goals from Sam Gagner and Tyler Bertuzzi and two assists from Pius Suter.

Andrew Mangiapane had a goal and an assist and Noah Hanifin also scored for the Flames, who are on an 8-1-1 tear. Jacob Markstrom made 21 saves.

Steven Stamkos had a goal and two assists to break the Lightning’s record for career points in a victory over visiting Toronto.

Stamkos scored his 34th goal of the season on a second-period power play to record his 954th point, passing Martin St. Louis as the franchise’s all-time leader. Stamkos added two assists in the third period.

Rookie Seth Jarvis scored the go-ahead goal against his hometown team with 11:39 to play as Carolina defeated visiting Winnipeg.

James van Riemsdyk had two goals and one assist while Ivan Provorov had one goal and one assist to lift Philadelphia past host Montreal in a matchup of the two worst teams in the Eastern Conference.

Oskar Lindblom, Travis Konecny and Morgan Frost added one goal apiece for the Flyers, who snapped a six-game losing streak. Bobby Brink contributed two assists for Philadelphia, and Martin Jones made 31 saves for the win.

Mike Hoffman, Jake Evans and Cole Caufield scored one goal each for the Canadiens, who dropped their seventh in a row.

Kevin Fiala scored two goals and Kirill Kaprizov and Mats Zuccarello each had a goal and two assists to lead Minnesota to a victory over Vancouver in Saint Paul, Minn.

Ryan Hartman had a goal and an assist, Jared Spurgeon scored once and Frederick Gaudreau added two assists for Minnesota, which secured second or third place in the Central Division and will face the St. Louis Blues in the playoffs.

Robert Thomas scored the go-ahead goal as St. Louis extended its point streak to 14 games with a victory at San Jose.

The Blues have gone 12-0-2 during their club-record streak to keep pace with the Wild in the race for second place in the Central Division. Pavel Buchnevich had a goal and an assist while Dakota Joshua also scored for the Blues. Jordan Binnington made 20 saves.

Noah Gregor scored and James Reimer made 25 saves for the Sharks, who are 1-7-4 in their past 12 games.

Rasmus Dahlin had a goal and an assist to help Buffalo earn a win in Newark, N.J.

Owen Power scored his first NHL goal, Victor Olofsson had three assists and Tage Thompson had two assists for the Sabres, who have won three in a row. Craig Anderson made 29 saves.

Jesper Boqvist and Nikita Okhotiuk scored and Andrew Hammond made 23 saves for the Devils.

Jake Guentzel had a hat trick to reach 40 goals and Casey DeSmith stopped all 52 shots he faced as host Pittsburgh beat Boston.

It was DeSmith’s ninth career shutout, his third of the season and his first against Boston. His save total was a franchise record for a shutout. Jason Zucker also scored for the Penguins, who had lost nine of 13 (4-7-2) entering the night.

Jeremy Swayman made 28 saves for the Bruins, who had a two-game winning streak snapped.

Phillip Danault and Anze Kopitar also scored goals while Jonathan Quick made 15 saves for the Kings, who can secure their spot in the postseason with two victories over their last three games.

Patrick Kane scored a goal and Collin Delia had 31 saves for the Blackhawks, who lost for the third time in four games. Chicago is 2-9-2 going back to March 26.

Andrew Copp recorded a natural hat trick in the first period as the New York Rangers rolled to a victory over the New York Islanders in Elmont, N.Y.

The Rangers clinched at least second place in the Metropolitan Division. They are tied with the Hurricanes in points, but Carolina currently holds the tiebreaker edge with one more regulation win.

Brock Nelson scored twice, and Josh Bailey had a goal and an assist for the Islanders, who lost their third straight.