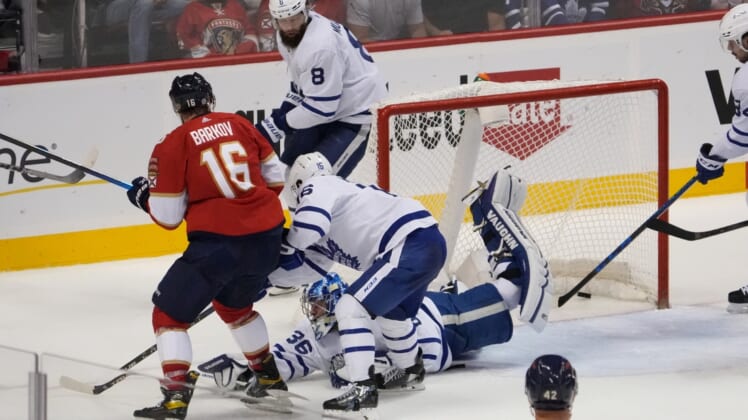 Jonathan Huberdeau scored his second goal of the game at 2:47 of overtime and the Florida Panthers overcame a four-goal deficit to defeat the visiting Toronto Maple Leafs 7-6 on Tuesday night in Sunrise, Fla.

Toronto led 5-1 in the second period, but Florida rallied with five straight goals. Huberdeau, who also had three assists, tied the game at 2:45 of the third period, on a power play. Aleksander Barkov then scored at 8:01 of the third to give Florida the lead.

Toronto’s John Tavares scored at 16:06, on a power play, to tie the game. In overtime, Barkov (who had three assists) set up Huberdeau’s 26th goal of the season.

J.T. Compher added a goal and an assist and Josh Manson, Darren Helm and Artturi Lehkonen also scored for the Avalanche, who won their fourth in row. Darcy Kuemper made 41 saves.

Jake Guentzel had a goal and an assist, and Bryan Rust, Evan Rodrigues and Mike Matheson scored for the Penguins, who have lost three of four. Tristan Jarry made 26 saves.

Drake Batherson had a goal and an assist in the third period, when Ottawa broke open a tie game at Montreal with three unanswered goals. The Senators matched a season high by posting a third straight victory.

Austin Watson scored twice, Brady Tkachuk recorded a goal and two assists and Tim Stutzle and Colin White scored for the Senators, who beat Montreal for the first time in three tries this season.

Brendan Gallagher notched a goal and an assist and Cole Caufield and Justin Barron also scored for the Canadiens. Jake Allen stopped 26 shots.

Philip Tomasino also tallied a goal and two assists, Matt Duchene had a goal and an assist, Filip Forsberg had three assists and Mattias Ekholm added two assists for Nashville. Juuse Saros made 47 saves for his 34th victory of the season.

Kirill Kaprizov and Mats Zuccarello each had a goal and an assist for Minnesota, which had a 10-game point streak (9-0-1) snapped.

Alex Nedeljkovic made a career-high 47 saves, Jakub Vrana had a goal and an assist and host Detroit snapped a six-game winless streak by downing Boston.

Patrice Bergeron had a goal and an assist for Boston, which had won 10 of its previous 12 games. Erik Haula and Brandon Carlo had first-period goals and Jeremy Swayman made 24 saves.

Radek Faksa’s short-handed goal in the second period broke a deadlock and held up as the winner as host Dallas defeated New York.

Marian Studenic and Tyler Seguin also scored for the Stars, who have won eight of their past 11 games and jumped back into the second wild-card position in the Western Conference. Jake Oettinger made 19 saves.

Carson Meyer and Sean Kuraly each had one goal and one assist to lift Columbus to a win at Philadelphia.

Noah Cates and James van Riemsdyk scored one goal each for the Flyers, who lost for the fourth time in five games. Carter Hart stopped 26 of 29 shots in defeat.

Chris Kreider set a pair of franchise records with his go-ahead goal in the first period as New York snapped a two-game losing streak with a victory in Newark, N.J.

Kreider’s power-play goal with 2:03 left in the first was his 25th of the season, breaking a tie for the most power-play tallies by a Rangers player in a single season with Jaromir Jagr. It was also his franchise-best 10th game-winning goal of the season.

Ryan Strome and Justin Braun also scored for the Rangers, who moved within two points of first-place Carolina in the Metropolitan Division. Alexandar Georgiev made 20 saves. Yegor Sharangovich scored for the Devils, and Nico Daws recorded 14 saves.

Victor Olofsson had a goal and an assist in the third period as Buffalo broke a tie and beat visiting Carolina.

Jeff Skinner, Casey Mittelstadt and Dylan Cozens also scored for the Sabres, who have earned at least one point in eight of their past nine games. Craig Anderson made 32 saves.

Connor McDavid scored on a breakaway 31 seconds into overtime to lift Edmonton over host San Jose and into second place in the Pacific Division.

McDavid extended his point streak to 14 games (12 goals, 15 assists) with his 41st goal of the season. Ryan Nugent-Hopkins scored short-handed, and Mike Smith made 31 saves and assisted on the winning goal for the Oilers, who have won five in a row.

Tomas Hertl scored and James Reimer made 22 saves for the Sharks, who have lost five of six.