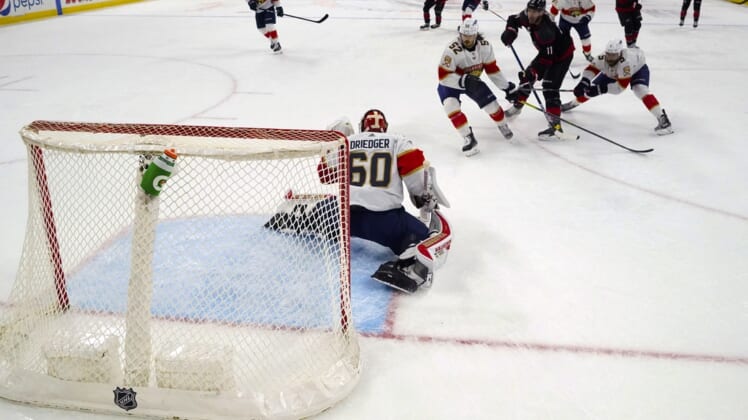 Jonathan Huberdeau had two goals — including the overtime winner — and an assist as the Florida Panthers rallied to defeat the Carolina Hurricanes 4-3 on Wednesday night in Raleigh, N.C.

The Panthers, who came back from a 2-0 deficit, improved to 5-0-1 on the road this season, the best away-from-home start in franchise history.

Alex Wennberg and Juho Lammikko also scored for the Panthers while goalie Chris Driedger made 32 saves and earned a secondary assist on Huberdeau’s first goal.

Connor McDavid logged his 500th point in his 369th NHL game to help host Edmonton earn a win over Winnipeg.

Thanks to a first-period assist, McDavid tied the mark for the eighth-fewest games needed to reach the milestone, joining such legends as the Oilers’ Wayne Gretzky (234 games) and the Pittsburgh Penguins’ Mario Lemieux (287). McDavid pulled level with the Penguins’ Sidney Crosby (also 369), with no other active players above them on the list.

Alexander Kerfoot scored in the third period to snap a tie and Toronto defeated visiting Ottawa. The teams have split the first two games of a three-game series.

Auston Matthews also scored for Toronto and Jake Muzzin had two assists one game after the Maple Leafs blew a four-goal lead in losing to the Senators in overtime Monday.

Brady Tkachuk scored for the Senators. Frederik Andersen made 27 saves for Toronto while Matt Murray stopped 26 shots for Ottawa.

Alex DeBrincat added an empty-net goal with 57.5 seconds remaining as the Blackhawks swept the two-game series and improved to 7-1-1 in their past nine games. Chicago won the series opener 3-2 Monday night in overtime, the fourth game in its last five to head to bonus time.

Lankinen, a 25-year-old rookie from Finland, made 29 saves to improve to 7-2-3 in 12 starts this season. Red Wings goalie Jonathan Bernier stopped 24 of 25 shots to keep Detroit in the game.

Brock Boeser scored once and added two assists to lead Vancouver to a convincing victory at Calgary.

Bo Horvat and J.T. Miller each collected one goal and one assist for the Canucks, who received a 35-save performance from Braden Holtby to claim the finale of a four-game set between the clubs. Both teams won twice.