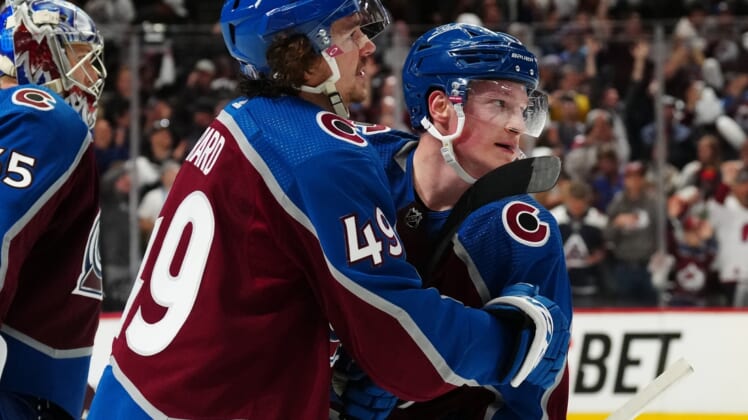 Cale Makar scored 8:31 into overtime and the Colorado Avalanche beat the Nashville Predators 2-1 on Thursday night in Denver to take a 2-0 lead in their Western Conference first-round playoff series.

The Avalanche held the Predators to 15 shots after the first period and dominated chances in the third period and overtime. Colorado finally solved Ingram in OT after Nico Sturm took a shot from near the left circle that Ingram saved. The rebound came to Makar in the slot, and his wrister gave the Avalanche a two-game edge in the series.

It was Makar’s second goal of the postseason. Nathan MacKinnon also scored and Darcy Kuemper stopped 25 shots for the Avalanche, who head to Nashville for Game 3 on Saturday.

Rookie goaltender Connor Ingram made a career-high 48 saves and Yakov Trenin scored for the Predators.

Joe Pavelski’s first-period goal held up as the game-winner thanks to a shutout performance by goaltender Jake Oettinger, and visiting Dallas beat Calgary to even the Western Conference first-round series at one win apiece.

Oettinger, in just his second NHL playoff start, made 29 saves — 12 of them in the third period. He has a shutout streak of 114 minutes and 59 seconds, and he has stopped 54 of 55 shots he has faced in the series. Michael Raffl’s empty-net goal with 69 seconds remaining sealed the win.

Jacob Markstrom stopped 21 shots for the Pacific Division-champion Flames, who are in dire need of offensive production with just one goal through the first two contests of the best-of-seven series. Markstrom has stopped 37 of 38 shots in the series.

Aleksander Barkov and Carter Verhaeghe each recorded a goal and an assist as Florida defeated Washington in an Eastern Conference first-round playoff game in Sunrise, Fla.

The best-of-seven series is tied 1-1, with Game 3 set for Saturday afternoon in Washington.

Artemi Panarin scored a key goal with 11:58 remaining and collected two assists for host New York, which never trailed in a victory over Pittsburgh that evened its Eastern Conference first-round playoff series at one win apiece.

Game 3 is Saturday in Pittsburgh. New York’s Frank Vatrano also contributed a goal and two assists. Vatrano scored 1:47 after Panarin as the Rangers rebounded nicely from their triple-overtime loss in the Tuesday series opener. New York’s Igor Shesterkin followed up his 79-save performance in Game 1 by making 39 stops in Game 2.

Jake Guentzel collected his third goal of the series for Pittsburgh. Sidney Crosby scored late in the second after helping set up Guentzel.