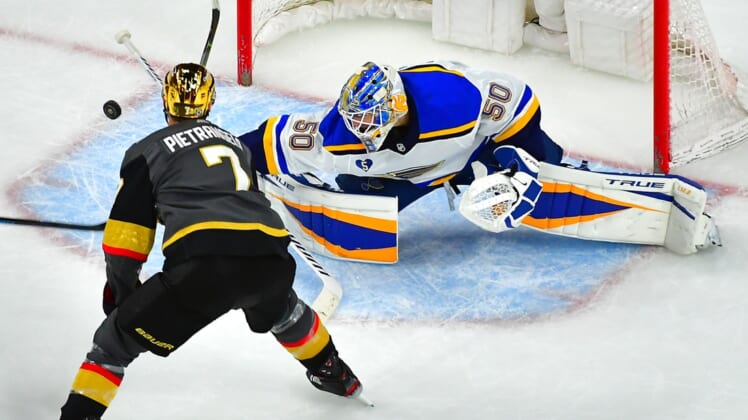 Jonathan Marchessault scored with 17.7 seconds remaining in overtime to give the Vegas Golden Knights a come-from-behind, 4-3 victory over the St. Louis Blues on Friday night in Las Vegas.

Despite the loss, the Blues clinched the final playoff spot in the West Division. Fourth-place St. Louis got a point for losing in overtime while the Los Angeles Kings lost 3-2 in regulation to the Colorado Avalanche.

Reilly Smith, Alec Martinez and Nicolas Roy also scored goals and Nicolas Hague had two assists for Vegas, which maintained a four-point West Division lead over the Avalanche with their sixth straight home win. Robin Lehner finished with 22 saves and also picked up an assist on the winning goal.

Joe Pavelski collected two goals and two assists while Roope Hintz scored once in a three-point game to lead visiting Dallas to a victory over Tampa Bay that kept its playoff hopes alive.

Jamie Oleksiak and Joel Kiviranta also scored for the Stars, while goaltender Anton Khudobin made 25 saves. Blake Coleman and Alex Barre-Boulet scored for the Lightning.

Dallas is fifth in the Central Division, two points behind the Nashville Predators in the battle for fourth place and the final playoff spot. Meanwhile, the Lightning are locked into a first-round playoff meeting with the Florida Panthers, the first time the state rivals will meet in the Stanley Cup playoffs.

Cale Makar collected one goal and one assist to lead Colorado to a road victory over Los Angeles, ending the Kings’ playoff hopes.

Mikko Rantenan and Tyson Jost also scored for the Avalanche, who were without their top scorer — Nathan MacKinnon — due to a lower-body injury. Goaltender Philipp Grubauer made 15 saves.

Detroit erased a two-goal deficit by scoring three in the second period to end host Columbus’ five-game (2-0-3) point streak. The two teams will conclude their seasons Saturday night in Columbus.

Trailing 2-0, the Red Wings got goals from Joe Veleno, Danny DeKeyser and Jakub Vrana to take the lead, and they locked up the game with two empty net goals by Vladislav Namestnikov. Vrana added an assist, Valtteri Filippula had three assists, and Filip Hronek had two. Thomas Greiss made 22 saves in winning for the third time in four starts.

Washington missed a chance to tie Pittsburgh for first place in the East Division as visiting Philadelphia got two goals from Wade Allison in a victory Friday night.

The Flyers (24-23-7, 55 points) had lost five in a row to Washington, but Philadelphia never trailed. Goalie Brian Elliott played a strong game for the Flyers, finishing with 28 saves and an assist on Sean Couturier’s empty-net goal in the final minute.

Kirill Kaprizov scored off his own rebound 17 seconds into overtime to lift Minnesota to a win against Anaheim in Saint Paul, Minn.

Kaprizov and Joel Eriksson Ek each had a goal and an assist, Victor Rask and Nico Sturm also scored, and Kaapo Kahkonen made 22 saves for the Wild.

Adam Henrique had a goal and an assist, Max Comtois and Derek Grant also scored, and John Gibson stopped 32 shots for the Ducks.

Phil Kessel scored the go-ahead goal for Arizona, which scored five unanswered goals to come from behind and beat host San Jose.

Victor Soderstrom and Jan Jenik each scored their first career goal for Arizona, with Jenik accomplishing the feat on an empty-netter to cap his NHL debut. Soderstrom was playing his third NHL game.

Conor Garland collected a goal and two assists while Michael Bunting also found the net for the Coyotes. Darcy Kuemper made 26 saves in the win. Erik Karlsson and Timo Meier scored for the Sharks, and goalie Josef Korenar made 29 saves.