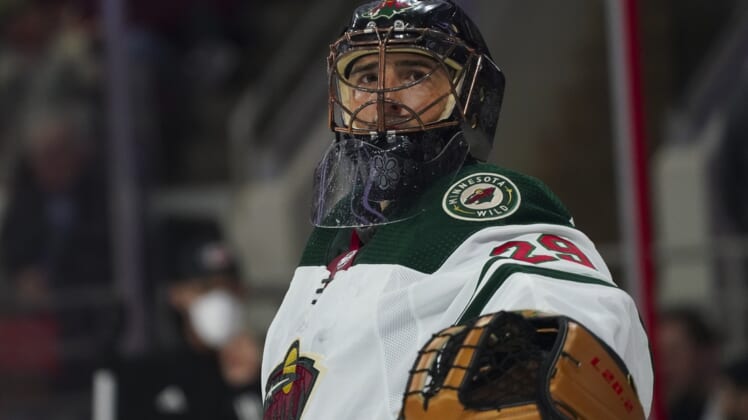 Marc-Andre Fleury made another strong impression since joining the Minnesota Wild, this time notching 37 saves in a 3-1 victory against the host Carolina Hurricanes on Saturday night in Raleigh, N.C.

Mats Zuccarello, Dmitry Kulikov and Kirill Kaprizov scored goals as the Wild extended their point streak to nine games by winning for the eighth time during that span. Zuccarello also recorded an assist, giving him a team-best 49 this season.

Carolina had a six-game point streak end. The last time the Hurricanes didn’t register a team point came in a March 20 shutout loss at home to the New York Rangers.

Fleury was in his third game since arriving from the Chicago Blackhawks in a trade. The Wild are 3-0-0 with Fleury in the net. He has given up four goals while facing 96 shots in those games.

Gustav Forsling scored 1:45 into overtime as Florida overcame a late four-goal deficit to post a win over host New Jersey.

Florida trailed 6-2 in the third period before Brandon Montour and Forsling scored 1:29 apart to halve the deficit. Captain Aleksander Barkov scored with 4:37 remaining and again with goalie Spencer Knight off for an extra attacker with 1:24 left to forge a 6-6 tie.

Forsling completed his two-goal performance by scoring on a rush to win the game. Five of Florida’s goals were scored by its defensemen, including two by Forsling and one each from Ben Chiarot, Radko Gudas and Montour. It was Chiarot’s first goal with the Panthers, who acquired him from the Montreal Canadiens at the deadline.

Devon Toews scored a tiebreaking goal late in the third period, Mikko Rantanen had a goal and an assist, and Colorado beat visiting Pittsburgh.

Sidney Crosby and Mike Matheson had goals, Jake Guentzel had two assists and Tristan Jarry made 35 saves for the Penguins.

Auston Matthews scored his 51st goal of the season and the 250th of his career to break a third-period tie as visiting Toronto defeated Philadelphia.

Ivan Provorov had two goals and assisted on a goal by Kevin Hayes, who also had an assist for Philadelphia.

Erik Haula’s second goal of the game — a power-play tally with 3:54 left in the third period — lifted Boston past visiting Columbus.

Haula decided the sixth win in seven games for Boston by tipping home Brandon Carlo’s shot from the top of the left circle. It was his second multi-goal game of the season. Jake DeBrusk and Charlie Coyle scored empty-net goals following Haula’s game-winner, capping off Boston’s three-goal third period.

Jeremy Swayman made 22 saves, improving to 12-2-1 in his last 15 starts in Boston’s net. Justin Danforth and Gustav Nyquist scored for the Blue Jackets, who have now lost six straight games.

Shooting in the bottom of the third round, Suzuki backhanded the game-deciding tally past Brian Elliott (27 saves) for Montreal’s lone win on its four-game road trip (1-2-1).

Jake Allen (37 saves) denied Tampa Bay’s Brayden Point, Nikita Kucherov and Steven Stamkos to win the extra session 1-0. Kucherov led the Lightning with three points, which included a goal, his 12th of the season, and a pair of assists.

Anze Kopitar and Adrian Kempe each had a goal with an assist, and Los Angeles continued a month-long stretch of strong play by beating host Winnipeg.

In his 1,200th career regular-season game, Kopitar scored the tiebreaking goal — with help from Kempe — just about midway through the first period, and the Kings never relinquished the lead. Gabriel Vilardi also scored and Cal Petersen made 25 saves as Los Angeles, in position to make its first playoff appearance since 2018, improved to 9-4-3 since March 4.

Nikolaj Ehlers recorded his 22nd goal and Adam Lowry also scored for Winnipeg, which is trying to move into playoff position in the Western Conference. Connor Hellebuyck stopped 35 shots for the Jets, who have dropped back-to-back games in regulation for the first time since Feb. 19 and 21.