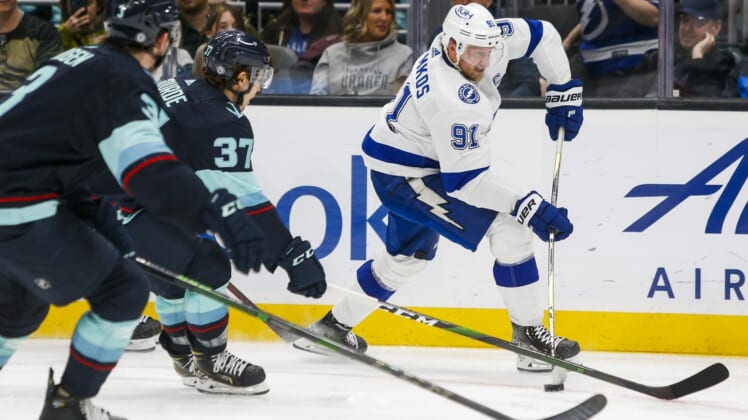 Victor Hedman scored a pair of power-play goals as the Tampa Bay Lightning wrapped up a six-game trip with a 4-1 victory against the Seattle Kraken on Wednesday night.

Nikita Kucherov and Anthony Cirelli also scored and Steven Stamkos, playing in his 900th career game, had three assists for the Lightning, who went 3-3-0 on the trip. Tampa Bay goaltender Andrei Vasilevskiy made 24 saves.

Yanni Gourde scored for the expansion Kraken, which lost for the 12th time in the past 14 games (2-10-2). Philipp Grubauer stopped 35 shots.

Jordan Greenway scored the go-ahead goal in the third period, and Minnesota held on for a win over Boston in Saint Paul, Minn.

Craig Smith and Brad Marchand scored one goal apiece for the Bruins, whose three-game winning streak ended. Jeremy Swayman turned aside 30 of 33 shots.

Jack Roslovic recorded his second two-goal performance of the season to fuel Columbus to a victory at Ottawa.

Eric Robinson scored for the second time in as many games, Sean Kuraly also tallied and Patrik Laine and defenseman Zach Werenski each notched two assists for the Blue Jackets, who have won three in a row. Columbus’ Elvis Merzlikins notched 30 saves.

Tyler Ennis scored a goal and Anton Forsberg turned aside 33 shots for the Senators, who have lost eight of their past 10 games. Minutes-eating defenseman Thomas Chabot recorded an assist before exiting early in the second period due to an upper-body injury.

Matthew Tkachuk had a goal and two assists as Calgary earned a win over visiting New Jersey.

Dillon Dube had a goal and an assist for Calgary. Brett Ritchie, Andrew Mangiapane, Johnny Gaudreau and Milan Lucic scored the Flames’ other goals, and Jacob Markstrom stopped 30 of 33 shots.