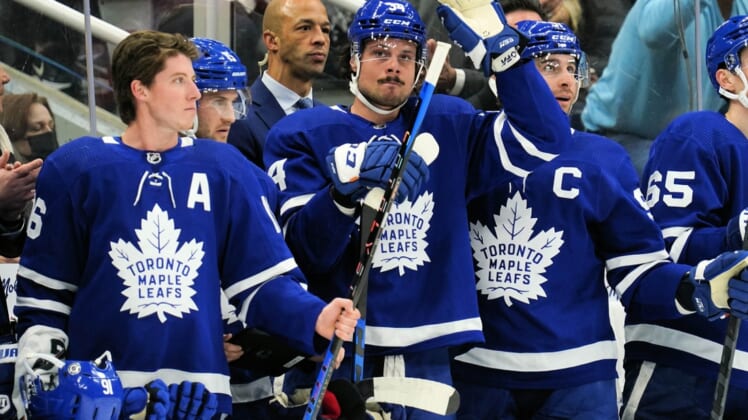 Auston Matthews scored twice for the Maple Leafs in a 3-2 win against the visiting Montreal Canadiens on Saturday, allowing Toronto to clinch a postseason berth.

Matthews has 21 goals and 29 points in a 16-game point streak, and his franchise single-season-record goal total is up to 58.

John Tavares also scored and Erik Kallgren made 24 saves for the Maple Leafs, who are 7-0-1 in their past eight games.

Joel Edmundson and Cole Caufield scored for the Canadiens. Jake Allen saved 14 of 15 shots before leaving the game in the first period with a lower-body injury sustained on Matthews’ first goal. Sam Montembeault made 23 saves in relief.

Chris Kreider scored twice for host New York, which beat Ottawa to clinch a playoff berth and move into a tie for first place in the Metropolitan Division.

Kreider scored the Rangers’ third and fifth goals to increase his season total to 49, which ties him for fourth most in a single season in team history. Artemi Panarin, Andrew Copp and Ryan Strome also scored for the Rangers, and Igor Shesterkin stopped 21 shots.

Nathan MacKinnon scored the shootout winner and Darcy Kuemper made 49 saves to lead visiting Colorado past Edmonton for its sixth consecutive win. MacKinnon also scored in regulation for the league-leading Avalanche.

Kuemper 11 saves in overtime, eight of them during a frantic Edmonton power play. He also denied all three Oilers he faced in the shootout: Connor McDavid, Leon Draisaitl and Ryan Nugent-Hopkins. MacKinnon also scored in regulation.

Jonathan Huberdeau scored an empty-net goal with 67 seconds left to ice the game and extend his points streak to 11 games. Florida got another empty-netter from Gustav Forsling with 50 seconds left. The Atlantic Division-leading Panthers also got a goal from Carter Verhaeghe.

Nashville got a goal from Ryan Johansen plus 21 saves from Juuse Saros. The Predators have won four of their past six games as they battle for a playoff spot.

Noah Hanifin had four assists as Calgary defeated host Seattle in a matchup of the Pacific Division’s first- and last-place teams.

Blake Coleman, Trevor Lewis, Michael Stone and Tyler Toffoli scored for the Flames, who completed a four-game sweep on their West Coast trip. Jacob Markstrom made 27 saves for his 34th victory of the season, tied for third in the league.

Karson Kuhlman scored for the expansion Kraken, and Philipp Grubauer stopped 25 of 28 shots.

Tom Wilson scored a third-period tiebreaking goal to give visiting Washington a win over slumping Pittsburgh.

Brayden McNabb had a goal and two assists and Robin Lehner made 29 saves as Vegas cruised to a victory over Arizona in Las Vegas.

It was the first three-point of McNabb’s career. Evgenii Dadonov had a goal and an assist and Max Pacioretty, Zach Whitecloud, Jake Leschyshyn and Jack Eichel also scored goals for Vegas, which moved into a tie with Dallas for the final wild-card spot in the Western Conference.

Barrett Hayton scored for Arizona, which lost its third straight and fell for the 10th time in the past 12 games. Karel Vejmelka finished with 33 saves.

Nico Hischier and Pavel Zacha scored 10 seconds apart in the final 1:11 as New Jersey stunned Dallas and delivered a blow to the host’s playoff hopes.

Ty Smith scored 4:26 into the final period for the Devils, who snapped a nine-game road losing streak dating back to Feb. 25. New Jersey goalie Nico Daws made 27 saves.

Ryan Suter scored in the second period for the Stars, who got 20 saves from Jake Oettinger.

Jack Roslovic had three goals and an assist, completing his hat trick in overtime to lead Columbus to a win at Detroit.

Cole Sillinger and Justin Danforth also scored for the Blue Jackets, who won for just the second time in 10 games. Zach Werenski had three assists, Gustav Nyqvist added two helpers and Elvis Merzlikins made 34 saves for the win.

Tomas Hertl and Nick Bonino each had a goal for San Jose, which is mired in an 0-5-1 slide. Kaapo Kahkonen made 35 saves in the loss.

Trevor Zegras scored two goals and Derek Grant added a goal and an assist for visiting Anaheim in a win over Philadelphia.

Sonny Milano and Zach Aston-Reese also scored and Anthony Stolarz made 30 saves for the Ducks, who had lost 13 of their previous 14 games. Jamie Drysdale and Andrej Sustr contributed two assists apiece.

Travis Sanheim, Ronnie Attard and Ivan Provorov scored and Martin Jones made 29 saves for the Flyers, who had won two of their previous three.

Justin Faulk thrilled the home crowd by scoring two goals in as many minutes as St. Louis defeated New York.

Grant Hutton scored and Semyon Varlamov made 25 saves for the Islanders, who lost for the second time in three games.