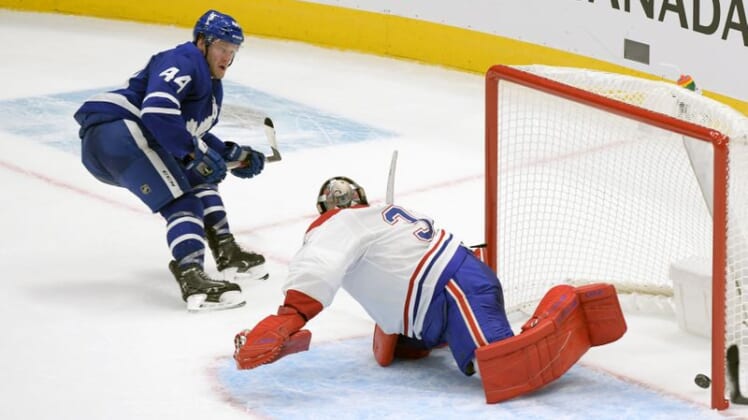 Morgan Rielly scored at 3:24 of overtime and the Toronto Maple Leafs defeated the visiting Montreal Canadiens 5-4 on Wednesday night in the season opener for both clubs.

Montreal’s Phillip Danault missed on a breakaway during the overtime, and then Rielly converted a pass from John Tavares on a two-on-one for the game-winner.

William Nylander scored two goals and had an assist for the Maple Leafs. Tavares finished with a goal and two assists, and Jimmy Vesey scored the team’s other goal.

Ondrej Palat scored on Tampa Bay’s second power play of the season in a three-goal first period, and the Lightning began their Stanley Cup title defense with a season-opening win over visiting Chicago.

Playing their first game without high-scoring winger Nikita Kucherov, the Lightning received tallies from Palat, Mathieu Joseph and Anthony Cirelli in the opening frame. Steven Stamkos had a goal and two assists, and Brayden Point and Cirelli each had a goal and a helper.

Joel Farabee had a goal and three assists and Philadelphia broke things open in the third period to beat visiting Pittsburgh in the season opener for both teams.

Mark Jankowski and Brandon Tanev each had a goal and an assist and Sidney Crosby also scored for the Penguins. Tristan Jarry made 19 saves.

Andre Burakovsky scored and Philipp Grubauer made 28 saves for the Avalanche. Colorado played without Erik Johnson, one of its top defensemen, after he tested positive for COVID-19. Johnson is one of 27 NHL players who tested positive for the virus during the preseason.

Brock Boeser scored a pair of third-period goals to lead Vancouver to a season-opening victory at Edmonton.

Bo Horvat netted one goal and one assist, while Tanner Pearson and Quinn Hughes both produced two assists for the Canucks, who received a 28-save performance from new goaltender Braden Holtby.