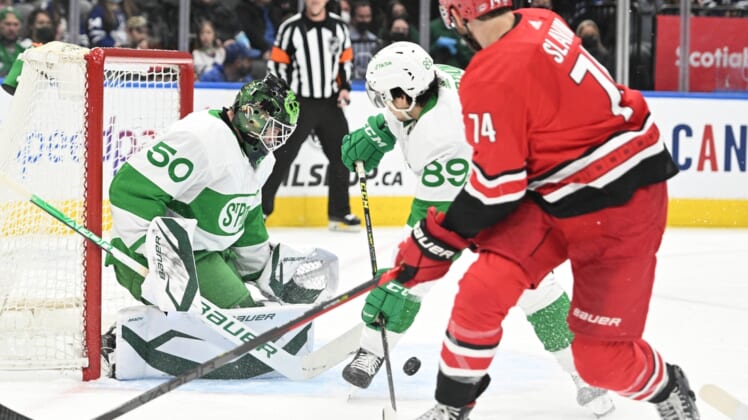 Kallgren earned a shutout against the Dallas Stars in his first NHL start on Tuesday. He made his debut with 30 minutes of relief on March 10 in an overtime loss to the Arizona Coyotes.

Ilya Mikheyev, Mitchell Marner and Ondrej Kase scored for the Maple Leafs, who have won two in a row and sit five points behind the conference-leading Florida Panthers.

Ethan Bear and Vincent Trocheck scored for the Hurricanes, who have lost two straight and sit one point behind the Panthers. Former Maple Leafs goaltender Frederik Andersen made 18 saves for Carolina.

Connor McDavid extended his multi-point streak to four games with a goal and an assist as Edmonton routed visiting Buffalo.

Kailer Yamamoto and Tyson Barrie also each had a goal and an assist for the Oilers, who won their fourth straight. Mike Smith made 27 saves.

Victor Olofsson scored and Craig Anderson made 30 saves for the Sabres, who lost for the first time in three games.

Chad Ruhwedel and Mike Matheson scored in regulation for the Penguins, and Tristan Jarry made 23 saves. Jarry added two stops in the shootout, and the Blues missed the target twice.

Ivan Barbashev paced the Blues’ offense with a goal and an assist, and David Perron also scored. Ville Husso, who finished with 43 saves, stopped the first three Penguins attempts in the shootout before Rust beat him.

Alex Ovechkin and Conor Sheary each had a goal and an assist for Washington, which has won three straight and six of seven (6-0-1). Vitek Vanecek made 39 saves.

Oliver Bjorkstrand and Patrik Laine scored for Columbus, which had won three straight. Joonas Korpisalo allowed three goals on nine shots before Elvis Merzlikins came on early in the second period and made 20 saves.

Jamie Benn had a three-point night, collecting a goal and two assists for Dallas. Radek Faksa scored the Stars’ other goal.

Nick Suzuki and Cole Caufield each had a goal and an assist for Montreal. Corey Schueneman also scored for the Habs, putting the Canadiens ahead in the third period on his first career NHL goal.

Kyle Palmieri scored the tiebreaking goal with 2:44 remaining to lift the visiting Islanders past the rival Rangers in a matchup of New York foes.

After Rangers defenseman Ryan Lindgren was elbowed in the face by Zdeno Chara, the Islanders moved the puck up the right side. Ryan Pulock made a pass from near the right circle, Palmieri gained possession of the bouncing puck in front of the crease, batted it out of mid-air and lifted it over goalie Igor Shesterkin.

Palmieri’s 11th goal lifted the Islanders to the fourth win in five games (4-0-1) and capped a physical affair that saw both teams produce several chances and get timely saves from their goaltenders.

Joel Farabee scored the go-ahead goal at 18:41 of the third period to lift host Philadelphia past Nashville.

Farabee also had an assist while Kevin Hayes and Travis Sanheim each added one goal and one assist for the Flyers, who snapped a three-game losing streak. The Flyers held a lengthy pregame ceremony to honor captain Claude Giroux before competing in his 1,000th career game with the franchise.