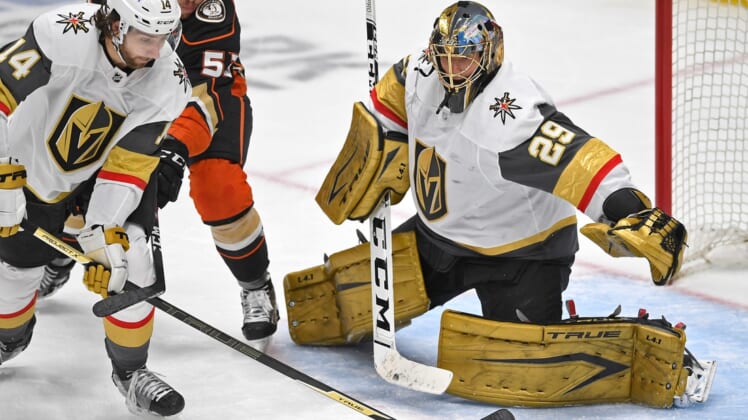 Mark Stone, Max Pacioretty and Nicolas Roy each had a goal and an assist and Marc-Andre Fleury stopped 33 shots to go along with his first assist of the season as the visiting Vegas Golden Knights moved into a tie for first place in the West Division with a 5-2 victory over the Anaheim Ducks on Sunday afternoon.

The Golden Knights tied idle Colorado for the top spot in the West with a league-high 64 points but the Avalanche, whose season is on pause until Thursday due to COVID-19 protocol, still have a game in hand.

Fleury improved to 20-10-0 for the season, the 13th time in his career that he hit the 20-win mark in a season. His assist on Stone’s second-period goal was the 18th of his career and fourth with the Golden Knights.

New York defenseman Nick Leddy scored 2:23 into overtime and rookie Ilya Sorokin made 30 saves to run his record to 5-0-1 this season against host Philadelphia.

Leddy scored after his shot deflected off the stick of Flyers defenseman Travis Sanheim and into the net. His second goal of the season snapped the Islanders’ scoring drought of just under 160 minutes, dating back to Travis Zajac’s tally 2:56 into the second period of Thursday’s loss to the Boston Bruins.

Brian Elliott turned aside 27 shots for Philadelphia, which has lost 12 of its last 17 games (5-8-4). Seven of the eight games of the season series between the teams were decided by one goal, with six of the contests extending beyond regulation.

Brad Marchand reached the 700-point mark for his career by collecting two goals and two assists to lead host Boston over the Capitals.

Captain Patrice Bergeron scored twice in a three-point performance and David Krejci also netted two goals for the Bruins, who received a 30-save performance from goaltender Tuukka Rask to run their winning streak to four games.

T.J. Oshie scored twice and Anthony Mantha also tallied for the East-leading Capitals, who have lost two of three games. Vitek Vanecek made 22 saves in defeat.

Bo Horvat scored his second goal of the game at 1:19 of overtime to lift Vancouver in a comeback win against visiting Toronto.

The Canucks, who were playing their first game since March 24 because of a severe COVID-19 outbreak that continues to leave them short-handed, rallied from a 2-0 deficit. Nils Hoglander had a goal and an assist, and Braden Holtby made 37 saves for the Canucks.

Toronto’s William Nylander returned from a five-game absence and contributed his 100th career goal and an assist, Auston Matthews also scored his NHL-high 33rd goal and Jack Campbell made 21 saves. The Maple Leafs have a four-point lead over the Winnipeg Jets for first place in the North Division.

Zibanejad, who turned 28 on Sunday, accepted a pass at the edge of the faceoff circle from Ryan Strome and fired a shot over the right shoulder of Mackenzie Blackwood and off the top post.

Pavel Buchnevich collected a hat trick on his 26th birthday in New York’s 6-3 win over New Jersey on Saturday afternoon.

Arttu Ruotsalainen and Rasmus Asplund also scored, and Victor Olofsson and Rasmus Dahlin each added two assists for the Sabres, who earned a split of back-to-back games between the clubs and moved to 6-3-3 in their past 12 games.

Tokarski started for the second day in a row after facing 41 shots Saturday in a 3-2 Pittsburgh win. Jason Zucker and Teddy Blueger scored, and Casey DeSmith made 25 saves for Pittsburgh.