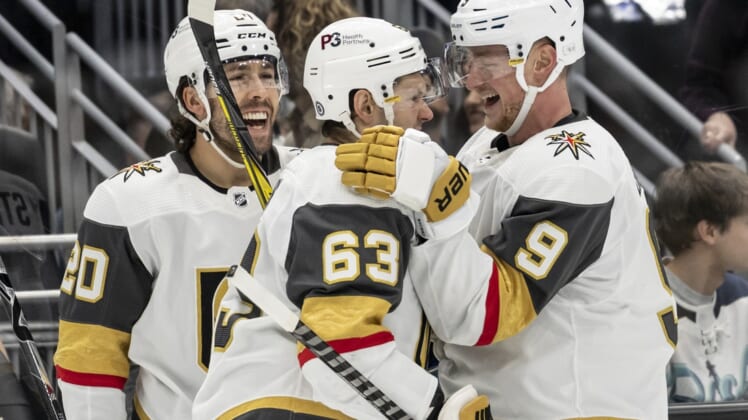 Jack Eichel had his first multi-goal game with Vegas, tallying twice, as the Golden Knights defeated the host Seattle Kraken 5-2 on Friday night.

Logan Thompson’s bid for a second straight shutout was thwarted at 10:44 of the third period as Seattle’s Alex Wennberg took a drop pass from Jared McCann and beat the screened goaltender from the slot. Thompson made 26 saves.

Shea Theodore also scored and Jonathan Marchessault and William Karlsson added empty-netters for Vegas, which swept the two-game series in Seattle and won its fourth in a row overall. The Golden Knights moved past the Dallas Stars and into the second and final wild-card position in the Western Conference.

Kole Lind scored his first NHL goal for the Kraken, and Philipp Grubauer stopped 21 of the 24 shots he faced.

Steven Stamkos and Brayden Point each added a goal and an assist. Nick Paul had three assists and Nikita Kucherov had two assists for the Lightning.

Traded by Chicago to the Lightning last month, Brandon Hagel scored into an empty net on Colton’s assist with 19 seconds remaining. The visitors got goals from Calvin de Haan and Alex DeBrincat.

Victor Olofsson’s power-play goal in the second period gave Buffalo a lead it wouldn’t relinquish in a victory over visiting Nashville.

Buffalo is on an eight-game point streak, with all eight of those games decided by a single goal. The Predators had their two-game winning streak end, missing a chance to solidify their bid for a playoff spot. Nashville still holds the top Western Conference wild-card position.

Buffalo’s Tage Thompson scored his 29th and 30th goals of the season, reaching the 30-goal plateau for the first time in his five NHL seasons. Filip Forsberg, Michael McCarron and Jeremy Lauzon all scored for Nashville.

Mathew Barzal collected a goal and an assist, Semyon Varlamov made 27 saves and the visiting Islanders scored early in each period in a victory over the Rangers.

Casey Cizikas and Matt Martin also scored for the Islanders, who improved to 11-4-1 in their past 16 games.

Mathieu Joseph scored his first career hat trick and also had an assist to lead Ottawa to a victory over host Detroit.

Josh Norris and Austin Watson also scored goals and Mads Sogaard finished with 27 saves in his NHL debut for Ottawa, which snapped a two-game losing streak.

Connor McDavid scored his second goal of the game in overtime to give Edmonton its ninth consecutive home victory, a decision against St. Louis.

Seconds after the Blues couldn’t convert a golden chance, McDavid finished a two-on-one rush with Leon Draisaitl for the winner 71 seconds into overtime, his 39th goal of the season. Zach Hyman also tallied twice, Evander Kane collected one goal and two assists and Darnell Nurse also scored for the Oilers. Mike Smith made 31 saves.

Pavel Buchnevich scored twice while Robert Thomas and Ivan Barbashev both collected one goal and one assist and Brayden Schenn added a goal for the Blues. Jordan Binnington started in goal and allowed four goals on 13 shots. Ville Husso stopped 25 of 27 shots in relief.

Isac Lundestrom had two goals and an assist to help Anaheim end an 11-game losing streak with a win at Glendale, Ariz. Anthony Stolarz made 22 saves for his third shutout of the season.

Cam Fowler had a goal and an assist, Trevor Zegras scored another lacrosse-style goal, Gerry Mayhew contributed a goal and Troy Terry had two assists for the Ducks, who were 0-8-3 in their previous 11 games.

Karel Vejmelka gave up three goals on nine shots before he was replaced by Josef Korenar, who made 26 saves for the Coyotes, who are 1-6-1 in their past eight games.