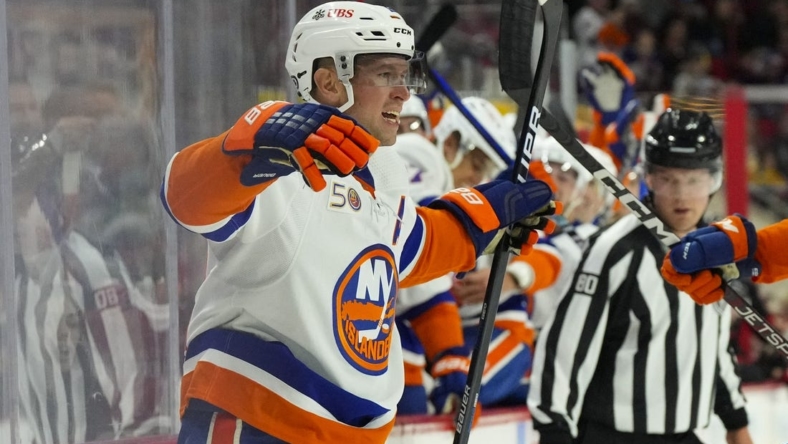 Josh Bailey scored a go-ahead goal in his 1,000th NHL game as the New York Islanders beat the Carolina Hurricanes 6-2 on Friday night in Raleigh, N.C.

Brock Nelson posted two third-period goals, while Oliver Wahlstrom and Matt Martin scored earlier for the Islanders, who have won back-to-back games. Zach Parise had a short-handed goal into an empty net.

Boston scored three goals in the second period and Linus Ullmark made 30 saves en route to a win over host Columbus.

Matt Grzelcyk, Charlie Coyle, Jake DeBrusk and David Pastrnak all scored for the Bruins, who have won five consecutive games and improved to 8-1-0.

Elvis Merzlikins made 25 saves over the first two periods before Daniil Tarasov entered the Blue Jackets net in relief. Tarasov stopped all six shots he saw in the third.

Logan Thompson made 29 saves for his second shutout of the season to help lead Vegas past Anaheim in Las Vegas for its third straight victory.

It was the third career shutout for Thompson, who improved to 4-2-0 on the season while also becoming the first goaltender in the NHL with two shutouts this season.

Reilly Smith and William Karlsson each had a goal and an assist, and Chandler Stephenson and Nicolas Roy also scored goals for Vegas. John Gibson stopped 14 of 18 shots for the Ducks, who dropped their seventh straight game. He was pulled after the second period.

Vitek Vanecek made 24 saves and Jack Hughes scored a third-period goal to give New Jersey a shutout win over visiting Colorado in Newark, N.J. The Devils are 5-1-0 in their past six games.

After a scoreless 40 minutes, Hughes broke the deadlock 2:59 into the third period. On a New Jersey power play, Hughes collected his third goal of the season, firing a quick shot from the circle that beat a screened Pavel Francouz (22 saves).

Colorado saw its two-game winning streak end, and the Avalanche took just their second shutout loss since the start of the 2021-22 season.