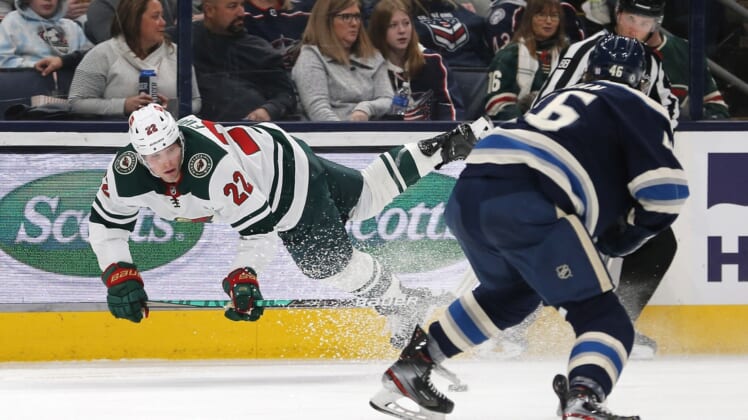 Zach Werenski scored the tying goal in the final minute of regulation, and Elvis Merzlikins stopped 36 shots, plus two of three in the shootout, as the Columbus Blue Jackets rallied for a 3-2 victory over the visiting Minnesota Wild.

Yegor Chinakhov scored the night’s first goal and the only one in the shootout as the Blue Jackets rebounded from Thursday’s disheartening 6-0 loss to the host New York Islanders. They were 0-2-2 in their previous four games.

Columbus, which managed just 13 shots on goal over the final two periods after recording 14 in the first, pulled Merzlikins as it trailed 2-1. Werenski scored amid traffic in front of the net to tie things with 30.4 seconds remaining in regulation.

Rust and Jeff Carter each had a goal and an assist and Mike Matheson also scored for the Penguins, who were 0-1-1 in their previous two. Jack Eichel and Alex Pietrangelo scored and Jonathan Marchessault had two assists for the Golden Knights, who lost their third in a row.

The Golden Knights were without several injured players, including No. 1 goaltender Robin Lehner (lower-body injury), and winger Max Pacioretty did not play in the third period for an undisclosed reason.

Brock Nelson scored in the first period and Bailey and Anders Lee scored 40 seconds apart early in the second for the Islanders, who have won back-to-back games for the first time since winning three in a row from Jan. 17-21.

Kyle Connor and Blake Wheeler scored for the Jets, who had a two-game winning streak snapped as they remained five points behind the Dallas Stars in the race for the final Western Conference wild-card spot.