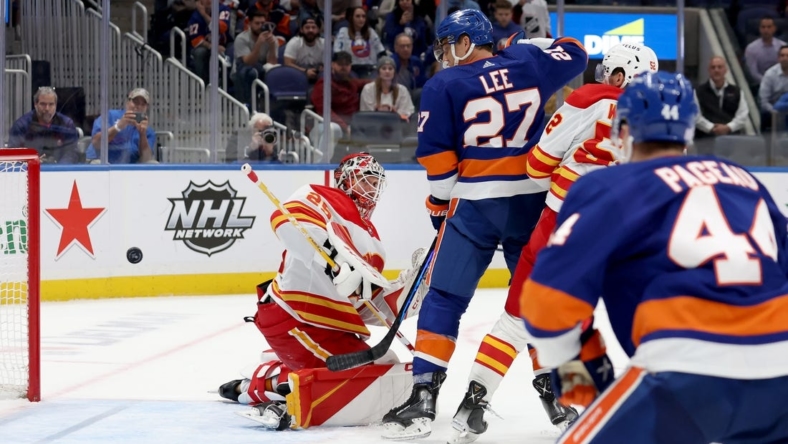 Noah Dobson scored a power-play goal with less than a minute left in overtime for the New York Islanders, who overcame a two-goal deficit in the third period to beat the visiting Calgary Flames 4-3 on Monday night in Elmont, N.Y.

The Islanders were outshot 30-12 through two periods while falling behind 3-1, but Anders Lee and Kyle Palmieri scored 59 seconds apart shortly beyond the midway point of the third. In overtime, Mathew Barzal faked a shot before dishing to Dobson, who fired a sizzling shot over the right shoulder of Jacob Markstrom.

Sebastian Aho scored in the first for the Islanders, who have won six of seven. Sorokin made 43 saves.

Mikael Backlund scored twice and Elias Lindholm had a goal for the Flames, who have lost five straight (0-3-2). Markstrom recorded 28 saves.

Bergeron’s power-play goal at 12:45 of the final frame broke a 1-1 tie before Frederic tallied at 16:28, helping the Bruins bounce back from a Saturday loss in Toronto that snapped a seven-game win streak.

Brad Marchand assisted on Boston’s first two goals to log his second multiple-point game. Jake DeBrusk also scored for Boston, while Linus Ullmark (25 saves) earned his ninth win in 10 starts. Brayden Schenn scored the lone goal and Jordan Binnington made 34 saves for the Blues, who have lost all of their last seven games in regulation.

Evgeny Kuznetsov had two goals and two assists to help Washington end a four-game losing streak with a win against visiting Edmonton.

Dylan Strome had two goals and an assist, Erik Gustafsson had three assists and Alex Ovechkin had a goal and an assist. Charlie Lindgren made 25 saves for the Capitals.

Ryan Nugent-Hopkins scored two goals, Connor McDavid and Leon Draisaitl each had a goal and an assist and Stuart Skinner made 26 saves in his fifth start of the season for the Oilers, who have lost three in a row.