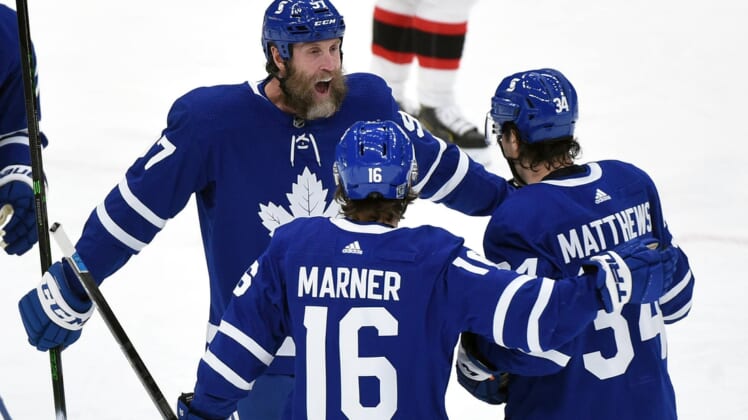 William Nylander had a goal and an assist, Alexander Kerfoot had two assists and Ilya Mikheyev and John Tavares added goals for Toronto in the rubber match of a three-game series. Morgan Rielly contributed two assists.

Matthews, who matched his career-best with the four-point game, has scored at least one point in each of his past 15 games, collecting 16 goals and six assists in that span. He missed time in the middle of that stretch, so his run is officially a 12-game streak, per NHL rules.

Michael Hutchinson made 34 saves in his first start of the season in the Toronto goal. Tim Stutzle had a goal and assist for Ottawa while Connor Brown and Drake Batherson each added a goal.

Brock Nelson scored and Semyon Varlamov made 33 saves for New York, which was 5-0-3 in its previous eight games. In an incident that is becoming a rarity in the NHL, Pittsburgh’s Brandon Tanev and New York’s Casey Cizikas fought at 2:18 of the first period.

The Capitals improved to 4-0-1 against the Sabres this season. Washington has dominated the rivalry in recent years, posting a 16-2-2 record against Buffalo dating back to March 2015.

After struggling through a four-game losing streak that was interrupted by a weeklong COVID-19 hiatus, the Capitals have won their past two games. The Sabres, who got a goal from Victor Olofsson, are 0-4-0 in their past four games.

Cam Atkinson scored a goal in his fifth straight game and Elvis Merzlikins made 32 saves to fuel host Columbus to a victory over Nashville.

Max Domi also tallied and Eric Robinson added an empty-net goal for the Blue Jackets. The modest offense was more than enough for Merzlikins, who notched his first shutout of the season and the sixth of his career.

Juuse Saros finished with 19 saves for the Predators, who have dropped five of their past six games. Nashville returned to the ice after having a pair of contests against the Stars postponed due to power outages and severe weather in the Dallas area.

Kyle Palmieri scored his first two goals of the season in the second period for visiting New Jersey, which never trailed in beating Boston. Palmieri, who hadn’t scored since a two-goal game against the New York Rangers on March 7, 2020, got the 24th multi-goal game of his career.

Pavel Zacha also scored period in the second for the Devils, who have won both games they’ve played since returning Tuesday from a 16-day coronavirus pause. Goalie Mackenzie Blackwood made 25 saves.

Jake DeBrusk scored in the second for the Bruins, who have lost back-to-back games in regulation for the first time in the regular season since Feb. 22-25, 2020.

Kaapo Kakko and Artemi Panarin each scored in a shootout to lift New York to a victory at Philadelphia.

Nicolas Aube-Kubel and Joel Farabee each scored one goal for the Flyers. Kevin Hayes had two assists and Carter Hart stopped 31 shots. Sean Couturier was the lone Flyer out of three to score in the shootout.

Brayden Schenn produced the game-tying goal for the Blues with 40 seconds left in regulation to force OT. Mike Hoffman had a goal and an assist for the Blues, and Perron logged two assists. Jordan Binnington stopped 30 of 32 shots to earn the victory.

John Leonard and Noah Gregor scored for the Sharks, and Martin Jones made 42 saves.

Gabriel Vilardi scored the decisive goal in the fourth round of a shootout and Los Angeles extended its winning streak to three games with a victory at Arizona.

Nick Schmaltz and Christian Dvorak scored in the first three rounds of the shootout for Arizona while Anze Kopitar and Adrian Kempe tallied for Los Angeles. Clayton Keller then fired a shot over the goal to start the fourth round, and Vilardi followed with a wrist shot past goaltender Darcy Kuemper’s glove side to win it.

Dustin Brown and Jeff Carter scored goals and Jonathan Quick made 20 saves for Los Angeles. Conor Garland and Phil Kessel tallied for Arizona, which fell to 1-2-1 in its past four games. Kuemper finished with 27 saves.

Ryan Hartman and Kevin Fiala scored goals 38 seconds apart in the first period and Minnesota recorded a win at Anaheim.

The Wild earned their first victory in two games since returning from a two-week COVID-19 break. Marcus Foligno sealed the victory on a power-play goal with 3:45 remaining. Minnesota goaltender Kaapo Kahkonen made 16 saves as the Wild won a game for the first time since Jan. 31 at home against the Colorado Avalanche.

Sam Steel scored a second-period goal for Anaheim, which got 24 saves from John Gibson.