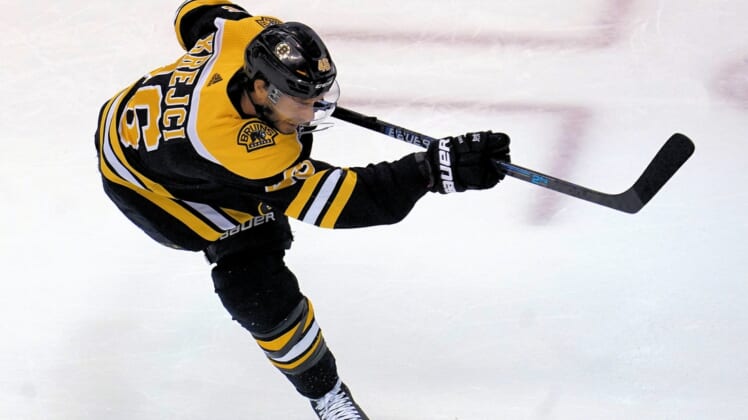 Aug 29, 2020; Toronto, Ontario, CAN; Boston Bruins forward David Krejci (46) shoots the puck during warm up before game four of the second round of the 2020 Stanley Cup Playoffs against the Tampa Bay Lightning at Scotiabank Arena. Mandatory Credit: John E. Sokolowski-USA TODAY Sports

David Krejci recorded his 700th career point on the first of his three assists, and David Pastrnak had a goal and an assist as the visiting Boston Bruins handed the reeling Buffalo Sabres their 13th consecutive loss, 4-1 on Thursday.

Greg McKegg posted his first goal of the season while Jake DeBrusk and Craig Smith also scored for Boston, which won back-to-back contests for the first time since a five-game winning streak from Feb. 1-12. Jaroslav Halak stopped 23 of 24 shots as the Bruins beat Buffalo for a sixth straight time.

Kyle Okposo netted his first goal of the season and Carter Hutton made 33 saves as the Sabres’ misery continued one day after firing coach Ralph Krueger. Buffalo is 0-11-2 since winning at New Jersey on Feb. 23 — its longest slide since dropping 14 straight in 2014-15.

The Sabres, who have scored just three goals in four games, are also mired in an 0-9-1 home rut.

Seth Jones scored 4:09 into overtime to give Columbus the win over Carolina in Raleigh, N.C., in the first of four straight games between the Central Division rivals.

Jones’ overtime winner was his second of the night and marked his first multi-goal game of the season. Oliver Bjorkstrand had assists on all three Columbus scores. Kevin Stenlund scored the Jackets’ other goal. Joonas Korpisalo stopped 25 of 27 shots.

Sebastian Aho scored both of Carolina’s goals. The forward has 11 points (seven goals, four assists) over his last nine games. Alex Nedeljkovic saved 25 of 28 shots for the Hurricanes.

Oskar Lindblom’s second goal of the game snapped a tie with 2:22 left in the third period for Philadelphia, which squandered a three-goal, third-period lead before bouncing back from a historic defeat by edging New York in Uniondale, N.Y.

The Flyers, playing a day after giving up seven second-period goals in a 9-0 loss to the New York Rangers, took a 3-0 lead in the second period Thursday thanks to goals by Lindblom, Claude Giroux and Jakub Voracek in a span of just under 12 minutes. Carter Hart made 22 saves for the Flyers, who won for the third time in eight games (3-5-0).

But Michael Dal Colle, Sebastian Aho and Oliver Wahlstrom scored in a seven-minute span of the third period for the Islanders, with Nick Leddy assisting on all three. Varlamov recorded 27 saves for the Islanders, who have lost two straight following a nine-game winning streak.

Fabbri scored in each period as Detroit built a 3-0 lead before holding off the Stars’ rally. Fabbri’s other hat trick came against the Philadelphia Flyers on Dec. 28, 2016, as a member of the St. Louis Blues.

Jonathan Bernier, Detroit’s starting goaltender, was injured late in the second period after stopping all 22 shots he faced. He was replaced by Thomas Greiss, who made 16 saves. Roope Hintz and Jason Dickinson scored for the Stars, who got 18 saves from Jake Oettinger.

Connor McDavid scored both goals to lead host Edmonton to the win over Winnipeg and into a tie with the Toronto Maple Leafs for the top spot in the North Division.

Tyson Barrie, who leads all NHL defensemen with 30 points, collected a pair of assists, and goaltender Mikko Koskinen made 24 saves. Barrie has recorded six assists in the last two nights and is the fastest Oilers defenseman to 30 points (33 games) since Paul Coffey needed 22 games to get there in the 1986-87 season.

Mathieu Perreault scored for the Jets, who will look for revenge when they meet the Oilers again Saturday night. Laurent Brossoit stopped 19 shots for Winnipeg, which is third in the division, two points behind the Maple Leafs and Oilers.

Rookie Ross Colton’s tiebreaking goal at 5:32 of the third lifted goalie Andrei Vasilevskiy to his career-high-tying 10th straight win and host Tampa Bay to the win over Chicago.

In earning his NHL-best 19th win, Vasilevskiy made 19 saves to post 10 straight wins for the third time in his career. Victor Hedman registered a goal and an assist, Alex Killorn scored for the fifth time this season against Chicago, and Yanni Gourde tallied for the Lightning, who are 11-2-1 in their last 14.

Mattias Janmark produced a goal and an assist, and Dylan Strome provided a tally for Chicago, which fell to 3-6-1 in its last 10. Making his fourth straight start and 21st overall, Kevin Lankinen stopped 19 of 22 shots.

Mikko Rantanen had two goals and two assists, and Nathan MacKinnon and Gabriel Landeskog had a goal and two assists each as Colorado defeated Minnesota in Denver.

Cam Talbot stopped 50 shots and Victor Rask had a goal for Minnesota, which had its five-game winning streak snapped. The 55 shots allowed was one shy of the franchise road record, and the 50 saves were a regular-season career high for Talbot.

Adam Henrique scored a power-play goal 47 seconds into overtime to lift Anaheim over visiting Arizona. The Ducks ended a four-game losing streak, although they haven’t won a game in regulation since Feb. 11, covering 16 games (3-10-3).

Two rookies handled the scoring in regulation for the Ducks. Jamie Drysdale, an 18-year-old from Toronto making his NHL debut, had a goal and an assist, while Trevor Zegras, a 19-year-old from Bedford, N.Y., tied the game with his first NHL goal.

Ducks captain Ryan Getzlaf registered the 700th assist of his career on Drysdale’s goal, and Rickard Rakell added two assists. Conor Garland had a goal and an assist for Arizona, and Clayton Keller also scored.

Juuse Saros made 40 saves to earn his first victory since Feb. 28. He has allowed two goals or fewer in each of his past five starts, though he lasted just one period in one of those (March 2, when he left the game with an injury).

Panthers goalie Sergei Bobrovsky, who made 25 saves, saw his six-game winning streak end. He came up short of Roberto Luongo’s franchise record of nine straight wins in 2015-16. The Panthers lost for the first time this season, falling to 16-1-2, when tied or leading after two periods.

Jack Hughes had a goal and an assist as New Jersey Devils built a three-goal lead then held on to top visiting Pittsburgh in Newark, N.J.

It was the first of three consecutive games between the teams, with the first two in New Jersey. P.K. Subban and Travis Zajac also scored for New Jersey, which has won two games in row following four straight losses (0-2-2) and a stretch of nine losses in 10 games (1-7-2).

Devils goaltender Scott Wedgewood, who was a late addition, tied his season high with 40 saves. He started after Mackenzie Blackwood participated in the warmups but then did not dress for the game. There was no update on Blackwood’s status, other than the Devils saying the absence was not COVID-19 related.