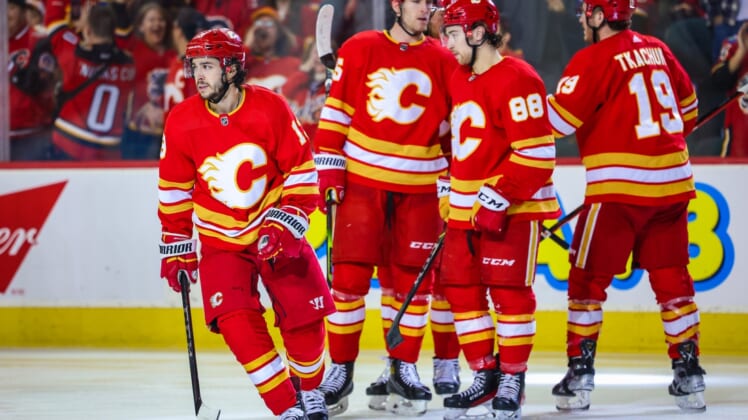 Johnny Gaudreau and Matthew Tkachuk both collected two goals and two assists, and the playoff-bound Calgary Flames rode a six-goal second period to a 9-1 home victory over the cellar-dwelling Arizona Coyotes on Saturday.

Goaltender Jacob Markstrom made 25 saves. Calgary, which officially clinched a playoff spot, has a seven-point edge on the Edmonton Oilers in the chase for the division title.

Nick Ritchie replied for the Coyotes (22-48-5, 49 points), who have lost six straight games — in which they’ve surrendered at least five goals in each outing and been outscored by a 38-7 margin.

Boston scored two goals in the opening minutes of regulation, then held on to not only beat visiting Pittsburgh but also to clinch a playoff spot.

Boston still has a chance to move up from a wild-card spot in the Atlantic Division.

Trent Frederic and Erik Haula scored within just a tick past two minutes into the game for the Bruins, who snapped what had been their longest losing streak of the season, three games. Boston goaltender Jeremy Swayman, playing with Linus Ullmark injured, made 23 saves.

Lafreniere recorded the first multi-goal performance of his career after being a healthy scratch in New York’s previous game against Philadelphia. Shesterkin notched his fifth shutout of the season for the Rangers, who have won five of their last six games overall.

Mikael Granlund had a goal and an assist, including the game-winner early in the third period, and Filip Forsberg had two assists to boost host Nashville to a win over Chicago.

The 40-year-old Smith made 39 saves for the 44th shutout of his 16-year career. Smith blanked host Nashville by the same 4-0 score Thursday. The Oilers improved to 8-1-1 in their past 10 games and strengthened their hold on second place in the NHL’s Pacific Division.

Kyle Okposo, Rasmus Dahlin and Vinnie Hinostroza scored earlier in the second for the Sabres, who trailed 2-0 fewer than four minutes into the first.

Goalie Craig Anderson made 18 saves, including 10 in the third, as Buffalo improved to 8-5-3 in its last 16 games. Joel Farabee and Owen Tippett scored in the first before Travis Konecny scored in the second for the Flyers, who have lost four straight.

Toronto kept up its pursuit of the top spot in the Atlantic Division by beating host Ottawa on Mark Giordano’s goal in overtime.

Mitch Marner scored twice for the Maple Leafs, Michael Bunting added a goal and an assist, and Kyle Clifford supplied a goal. Giordano added two assists for the Leafs, who trail first-place Florida by eight points in the division. Rookie goalie Erik Kallgren made 25 saves for his sixth win of the season.

Giordano netted the winner at 1:34 left in overtime off a long feed from William Nylander.

Pavel Buchnevich had a goal and two assists for the Blues, who passed the Wild for second place in the Central Division.

Ivan Barbashev, Vladimir Tarasenko, David Perron and Brandon Saad also scored for the Blues. Colton Parayko had two assists and Ville Husso made 31 saves. The Blues scored at least four goals for their 11th straight game. They are 10-0-1 during that span with eight consecutive victories.

Anthony Mantha scored twice in a 34-second stretch in the second period and added two assists to lift Washington over Montreal.

Defenseman Dmitry Orlov secured a career-high four-point performance (one goal, three assists) in his return from a lower-body injury for Washington, which improved to 17-1-2 in its last 20 trips to Montreal. Nic Dowd collected a goal and an assist, captain Alex Ovechkin, T.J. Oshie, Garnet Hathaway and defenseman Justin Schultz also tallied and Vitek Vanecek made 28 saves for the Capitals.

Ryan Poehling scored twice and Jake Evans and Nick Suzuki also tallied for the Canadiens, who have lost five in a row.

Ben Meyers recorded his first career goal on his first shot in his NHL debut, and Alex Newhook and Mikko Rantanen also had goals for the Avalanche, who have an 11-game point streak.

Nicholas Paul and Steven Stamkos each had a goal and an assist, and Brian Elliott made 14 saves for the Lightning, who rallied from a 4-2 deficit to move three points ahead of the Boston Bruins for third place in the Atlantic Division.

Kyle Connor had a goal and an assist, Paul Stastny, Josh Morrissey and Blake Wheeler also scored, and Connor Hellebuyck made 25 saves for the Jets, whose playoff hopes continue to fade.

Michael Raffl snapped a 22-game scoring slump to earn the game-winning goal and host Dallas claimed a victory over struggling San Jose to solidify their grasp of a wild-card playoff spot.

Tyler Seguin also tallied and goaltender Jake Oettinger made 23 saves for the Stars, who hold the second wild-card spot with a four-point edge on the Vegas Golden Knights.

Timo Meier replied for the Sharks, who have lost their last nine games (0-6-3) and have just one victory in 11 outings.

Ryan Donato scored the only goal of the shootout as Seattle rallied for a victory over New Jersey to cap a memorable home debut by rookie Matty Beniers.

Donato scored in the opening round of the shootout when he made several fakes and lifted a backhander over goalie Nico Daws. Donato’s goal came on a night when Beniers scored his first career goal late in the second period during a power play.

Seattle goalie Philipp Grubauer made 23 saves and then made pad saves on Tomas Tatar and Jesper Bratt in the shootout. The game ended when Yegor Shrangovich hit the post.

The Kings moved three points ahead of the Vegas Golden Knights for third place in the Pacific Division, and their final five games are against teams currently outside of the playoff bubble.

Sean Kuraly scored and Elvis Merzlikins made 36 saves for Columbus, which was eliminated from playoff contention when the Washington Capitals defeated the Montreal Canadiens earlier Saturday.