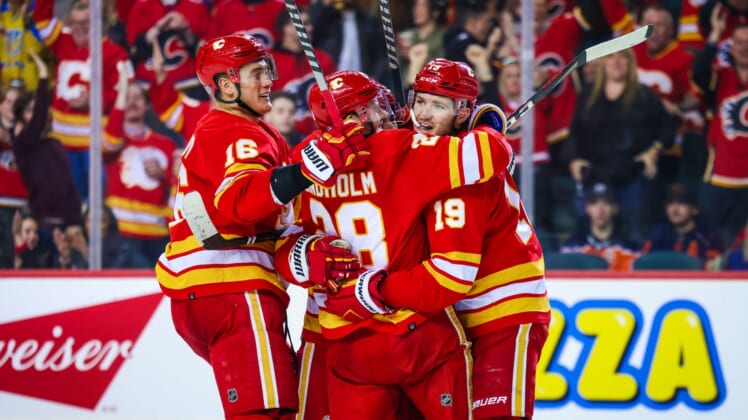 Johnny Gaudreau collected a career-best five assists and Matthew Tkachuk netted two goals and two assists to pace the host Calgary Flames to a 9-5 victory over the Edmonton Oilers on Saturday.

Elias Lindholm and Mikael Backlund both scored twice, while Chris Tanev scored once in a three-point outing. Oliver Kylington and Dillon Dube added singles for the Pacific Division-leading Flames in the Battle of Alberta clash. Goaltender Jacob Markstrom made 26 saves.

Evgenii Dadonov scored 2:05 into overtime as Vegas rallied from a 3-0 third-period deficit to defeat Chicago in Las Vegas.

Dadonov, who rejoined the Golden Knights on Wednesday after the NHL nixed a trade to Anaheim on Monday because of his limited no-trade clause, whipped a wrist shot from the high slot over the glove of Chicago goaltender Kevin Lankinen for the game-winner and his 17th goal of the season.

Chandler Stephenson had a goal and an assist, and Jack Eichel, William Karlsson and Alex Pietrangelo also scored for Vegas. Logan Thompson finished with 30 saves, while Jonathan Marchessault and Nicolas Roy each had two assists.

Brayden Point scored the game-winning goal with 2:28 remaining in overtime to lift Tampa Bay to a road win over Detroit.

Point’s goal came on a 4-on-3 power play after Detroit’s Tyler Bertuzzi was penalized for tripping 51 seconds into overtime.

Andrei Svechnikov and Seth Jarvis each scored two goals and Carolina snapped out of its scoring slump with three goals in the first 24 minutes of the win over host St. Louis.

Pavel Buchnevich scored twice and Robert Thomas had two assists for the Blues, and Ville Husso stopped 21 shots, though the Blues gave up two empty-net goals and then Jarvis’ second tally in the final 5:05.

Timo Meier notched the third hat trick of his career as host San Jose defeated Anaheim for its third win in its last four games.

Meier’s third goal, his 30th of the season, stretched the lead to 4-1 with 4:05 left. Marc-Edouard Vlasic also scored, Alexander Barabanov and Tomas Hertl each had two assists and James Reimer made 27 saves for the Sharks.

Gerry Mayhew scored his first goal since he was claimed off waivers by Anaheim on Sunday, and Lukas Dostal made 20 saves in his first start since Jan. 15 for the Ducks, who dropped their ninth in a row (0-7-2).

Aleksander Barkov tied the game in the closing minutes of regulation and scored the lone goal in the shootout, and Florida rallied from a three-goal deficit to defeat host Ottawa.

With Sergei Bobrovsky pulled for the extra attacker, Barkov tied it 3-3 at 17:44 of the third period with a shot from the blue line through traffic.

Anthony Duclair and Patric Hornqvist also scored for the Panthers, and Claude Giroux had two assists for the second straight game. Bobrovsky made 19 saves, along with two more in the shootout. Alex Formenton, Artem Zub and Dylan Gambrell scored goals for the Senators, and Anton Forsberg made 46 saves for Ottawa.

Kirill Kaprizov added two goals for Minnesota, including the tying score with 1:03 remaining in regulation to begin the dramatic comeback. Veteran goaltender Marc-Andre Fleury earned the win in his team debut for Minnesota, stopping 23 of 25 shots.

Paul Byron scored the go-ahead goal at 17:32 of the third period and Montreal went on to defeat visiting Toronto.

Jake Allen was superb in goal with 49 saves for the Canadiens, who lead the season series 2-1. David Savard added a goal and an assist for Montreal, Cole Caufield also scored and Nick Suzuki had two assists. Auston Matthews matched his career-best with his 47th goal for Toronto, giving him a career-best 81 points for the season.

Taylor Hall and Brad Marchand each scored a goal and collected two assists as surging Boston rolled to a victory over visiting New York.

Craig Smith, David Pastrnak, Erik Haula and Jake DeBrusk also scored for the Bruins, who are 14-2-1 in their past 17 games since a 4-1 loss to the Islanders Feb. 17 in Elmont, N.Y.

Brock Nelson scored his 30th goal of the season and Anders Lee added a tally for the Islanders.

Connor McMichael, Nicklas Backstrom and Alex Ovechkin scored in the third period for host Washington, which overcame a pair of one-goal deficits to beat New Jersey.

Tom Wilson scored in the second period for the Capitals, who won for the ninth time in 12 games (9-2-1) and are one point behind Toronto in the race for the Eastern Conference’s first wild card. Goalie Vitek Vanecek made 35 saves.

Anze Kopitar had a goal and an assist as host Los Angeles kept expansion Seattle from posting its first-ever three-game winning streak.

Elias Pettersson netted a pair of goals, including the go-ahead tally early in the third period, in Vancouver’s victory over host Dallas.

After tying the match in the second period, Pettersson reached 200 points for his career with the tiebreaking goal at 1:15 of the third period. Bo Horvat scored into an empty net at 18:54 of the frame, and J.T. Miller tallied with 39 seconds left to round out the scoring for Vancouver. Thatcher Demko made 35 saves.