Yakov Trenin and Nick Cousins also scored for the Predators, and goaltender Juuse Saros made 27 saves for his first shutout of the season and the 15th of his career.

Mikael Granlund had the primary assist on each of Forsberg’s goals. Granlund has 20 assists this season, tied for second in the NHL to Edmonton’s Connor McDavid, who has 22.

Columbus starting goaltender Elvis Merzlikins was pulled after allowing three goals on nine shots in the opening 12:52. Joonas Korpisalo took over and stopped 25 of 28 shots the rest of the way.

The Panthers trailed 4-1 entering the third period. Goals by Ryan Lomborg, Eetu Luostarinen, Sam Bennett and Sam Reinhart in the third enabled Florida to halt a losing streak at two games. The Panthers got a first-period goal from Joe Thornton.

Roope Hintz had a hat trick as Dallas defeated Carolina at home.

The win was the Stars’ fifth straight. The Hurricanes’ Ethan Bear, Tony DeAngelo and Brett Pesce, all defensemen, missed the game because of COVID protocols.

Goalie Braden Holtby made 39 saves and was less than four minutes away from his first regular-season shutout since March 2019.

O’Reilly’s shootout tally was a perfectly placed shot inside the left post. He also scored in regulation for the Blues, along with Logan Brown and Ivan Barbashev. Jordan Binnington made 30 saves before blanking the Lightning in the shootout.

Anthony Cirelli, Corey Perry and Erik Cernak scored for the Lightning, who have earned points in 13 of their last 15 games. Taylor Raddysh had two assists and Brian Elliott made 30 saves. 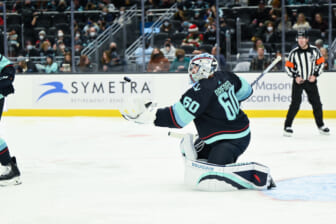 Timo Meier produced his second consecutive two-goal game for San Jose, which scored the first four goals and held off a third-period comeback attempt by the hosts in Newark, N.J.

Noah Gregor, Jacob Middleton and Erik Karlsson also scored for the Sharks, who have won the first two games of their third five-game road trip of the season and 4-1-0 in their past five games overall. Alexander Barabanov logged two assists, and James Reimer made 32 saves.

Tomas Tatar and Jesper Bratt scored in the third period for the Devils, who have lost six of eight (2-4-2). Mackenzie Blackwood recorded 26 saves.

Marc Staal picked a perfect time to score his first goal of the season as his tally at 11:33 of the third period lifted Detroit over host Boston.

Filip Zadina added his fourth goal of the season for Detroit, which won its third straight game following a four-game losing streak. Red Wings goaltender Alex Nedeljkovic made 41 saves in his first career start against the Bruins.

David Pastrnak netted his eighth goal of the season for the Bruins. Linus Ullmark stopped 14 of 16 shots to take his first career regulation loss vs. Detroit after entering at 5-0-2.

Kevin Shattenkirk tallied a goal and an assist and scored the winning goal in the shootout to lift Anaheim to a win at Los Angeles.

Troy Terry, Cam Fowler and Isac Lundestrom also scored and John Gibson made 30 saves for the Ducks, who had lost four of five.

Alex Iafallo scored two goals, Adrian Kempe and Dustin Brown also scored and Jonathan Quick made 32 saves for the Kings, who are 1-3-3 in their past seven games following a seven-game winning streak.

Jordan Greenway had a goal and two assists and Kirill Kaprizov and Jonas Brodin each had a goal and an assist to lead Minnesota to its fourth straight win, a decision over Arizona in Saint Paul, Minn.

It was a career-best three-point game for Greenway, who entered the contest with just three assists this season. Joel Eriksson Ek and Marcus Foligno also scored goals and Ryan Hartman added a pair of assists. Kaapo Kahkonen made 29 saves for the Wild.

Clayton Keller had a goal and an assist and Anton Stralman also scored for Arizona, which was playing the second game of a back-to-back that began with a 1-0 victory at Winnipeg on Monday. Scott Wedgewood finished with 32 saves.