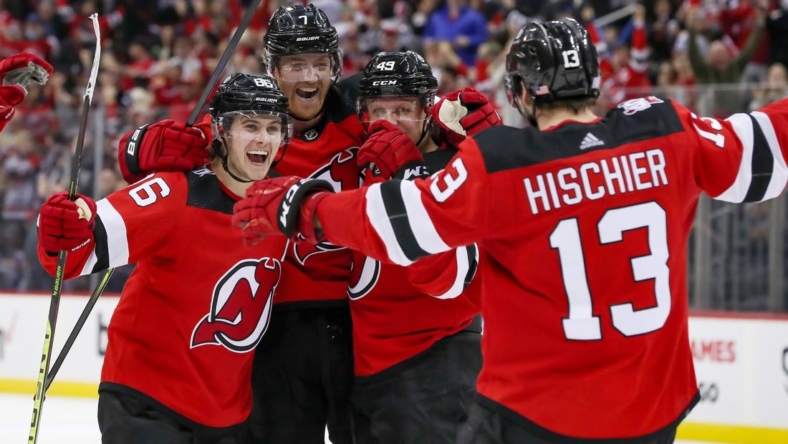 Nico Hischier scored a power-play goal with 33 seconds left in overtime, his second goal of the game, as the New Jersey Devils extended their winning streak to eight games with a 4-3 victory over the Ottawa Senators on Thursday night in Newark, N.J.

The Devils are on their first eight-game winning streak since Feb. 6-22, 2011, and Hischier kept it going with his 11th career game-winning goal. Tomas Tatar and Miles Wood also scored for the Devils, who are 11-1-0 in their past 12 games.

Akira Schmid put the Devils in position for the win by making five of his seven saves in overtime to earn his first career win. He entered when Vitek Vanecek was lifted for precautionary reasons with 9:23 left in the third following a second-period collision with Chabot.

Shane Pinto recorded his first career two-goal game by getting a pair of tying goals, though Ottawa dropped its seventh straight. Travis Hamonic also scored for the Senators, and Anton Forsberg made 37 saves.

Charlie McAvoy scored the winning goal in his first game of the season as Boston defeated visiting Calgary. McAvoy, who underwent offseason shoulder surgery, slotted home a wrist shot with 1:33 remaining in the second period to snap a 1-1 tie.

David Pastrnak had a goal and an assist and Connor Clifton also scored for the Bruins, who are 8-0-0 at home, matching the best home start to a season in franchise history. Linus Ullmark made 31 saves for the win.

It was the third career hat trick for Eichel. Chandler Stephenson had a goal and three assists, Alex Pietrangelo contributed a goal and two assists, Paul Cotter added a goal and an assist and Phil Kessel also scored for Vegas, which completed a sweep of a five-game Eastern Conference road trip. Logan Thompson made 31 saves.

Timo Meier, Tomas Hertl and Logan Couture scored for the Sharks, who are winless (0-2-3) in their last five games. Kevin Labanc and Erik Karlsson had two assists and Kaapo Kahkonen made 28 saves.

Andrei Svechnikov scored three goals for his second hat trick of the season and goalie Pyotr Kochetkov made 20 saves in winning his season debut as Carolina beat Edmonton in Raleigh, N.C.

Brent Burns, Jordan Staal, Jordan Martinook and Jesper Fast also scored as the Hurricanes bounced back after their first two-game stretch without a point this season. Sebastian Aho, Teuvo Teravainen and Martin Necas each had two assists, while Martinook and Fast had two points apiece.

Zach Hyman’s power-play goal in the second period put the Oilers on the board, and Connor McDavid’s tally at 7:26 of the third gave Edmonton a chance. McDavid also assisted on Hyman’s goal. Jack Campbell made 25 saves for Edmonton, but the Oilers lost for the fourth time in a five-game stretch.

Boone Jenner contributed two goals for Columbus, which was coming off back-to-back losses to the Colorado Avalanche in the NHL Global Series at Tampere, Finland. Columbus’ Zach Werenski had a goal and an assist, and Nick Blankenburg also scored. Blue Jackets goalie Joonas Korpisalo made 32 saves.

Ivan Provorov logged a goal and an assist, Tony DeAngelo had a goal and Carter Hart stopped 24 shots for Philadelphia, which had won its previous two games.

Joe Veleno and Lucas Raymond scored for Detroit, and Ville Husso made 25 saves.

Karel Vejmelka stopped all 24 shots he faced in his second career shutout, and Travis Boyd and Jack McBain scored in the third period as Arizona earned a victory over New York in Elmont, N.Y.

The shutout was the first of the season for the Coyotes, who are 3-0-0 on their month-long, 14-game trek necessitated by construction at Mullett Arena, the Arizona State facility where the team is expected to play for at least the next three seasons.

The shutout was also the first for Vejmelka since he recorded 46 saves in a 1-0 win over the Winnipeg Jets on Nov. 29, 2001. Ilya Sorokin recorded 27 saves for the Islanders, who fell for just the second time in nine games.

Evan Rodrigues added a goal, J.T. Compher and Nathan MacKinnon had two assists each and Alexandar Georgiev made 32 saves for Colorado.

Eeli Tolvanen, Roman Josi and Ryan Johansen had goals and Kevin Lankinen turned away 30 shots for the Predators, who have lost two in a row.

Phillip Danault scored in regulation and Jonathan Quick made 31 saves for the Kings, who earned their third victory in a row.

Taylor Raddysh scored and Petr Mrazek made 33 saves for Chicago, which beat the visiting Kings 2-1 in overtime on Nov. 3 for its only win in the past seven games.