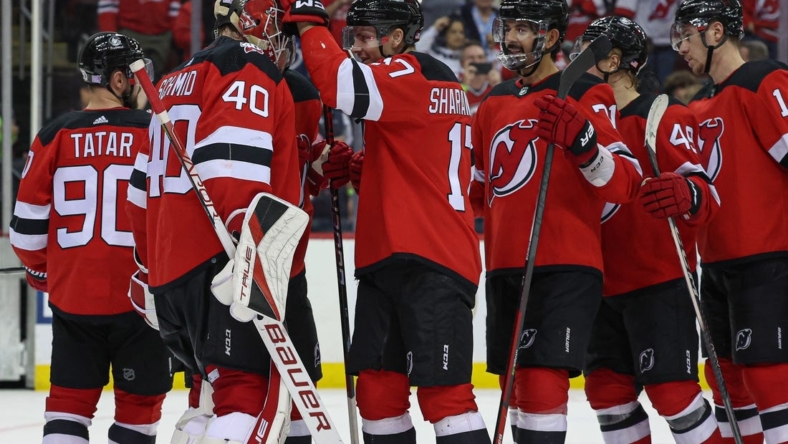 Tomas Tatar had a goal and an assist, and the New Jersey Devils extended their winning streak to nine games with a 4-2 victory over the Arizona Coyotes on Saturday night in Newark, N.J.

Jack Hughes, Jesper Boqvist and Dougie Hamilton also scored for New Jersey. The winning streak is the Devils’ longest since Nov. 17-Dec. 7, 2007, when they also won nine in a row.

Akira Schmid, making his fifth career start and first of the season, finished with 16 saves for his second career victory.

Clayton Keller and Dylan Guenther scored goals for Arizona, which had a three-game winning streak snapped. Kavel Vejmelka, who was coming off a 24-save shutout over the New York Islanders, stopped 22 of 26 shots.

Alex DeBrincat scored two goals, Tim Stutzle added one goal and one assist and Ottawa won on the road for the first time all season with a victory over host Philadelphia.

Thomas Chabot had one goal before leaving with an undisclosed injury early in the third as the Senators snapped a seven-game skid. Brady Tkachuk registered three assists and Claude Giroux, a former Flyers standout, had two assists. Giroux was honored by the Flyers in a pregame tribute. Ottawa goalie Cam Talbot made 37 saves.

Defenseman Tyson Barrie scored twice to fuel Edmonton to a victory over Florida in Sunrise, Fla.

Warren Foegele scored the eventual game-winning goal in the third period and Stuart Skinner made 40 saves for his third win of the season. Skinner’s performance was a welcome development for the Oilers, who have struggled to keep pucks out of the net lately.

Sam Bennett scored twice, and Spencer Knight made 28 saves for the Panthers.

Jakub Zboril’s first NHL goal at 12:31 of the third period stood as the game-winner as Boston edged host Buffalo.

Patrice Bergeron scored the two other Bruins goals, and Brad Marchand had two assists. Keith Kinkaid made 30 saves in his first game as a Bruin after being recalled from AHL Providence on Nov. 2.

Tage Thompson scored the lone Buffalo goal, and Craig Anderson made 27 saves. Buffalo had a 31-30 shot advantage while Boston scored the only power-play goal.

Mike Hoffman scored 1:03 into overtime and the Canadiens beat the visiting Penguins for their season-high third straight win.

Off a rush with Kirby Dach, Hoffman beat Pittsburgh’s Tristan Jarry (37 saves) in the early stages of the extra session to cap a wild game that featured five goals in the third period. Hoffman has four goals in three games.

Jeff Petry and Rickard Rakell each had a goal and an assist, and Jason Zucker posted three assists for Pittsburgh, which was also trying for a season-high third consecutive win. The Penguins have lost eight of their last 10.

Toronto scored three unanswered goals in the second period to come back and defeat visiting Vancouver.

Auston Matthews, Pierre Engvall and Jordie Benn scored for the Maple Leafs, who had lost two straight. Erik Kallgren made 28 saves in his second start in as many nights. Toronto lost 4-2 to the Pittsburgh Penguins on Friday.

Bo Horvat and J.T. Miller scored for the Canucks, who have lost two in a row and are 1-2-0 on their five-game road trip. Spencer Martin stopped 32 shots.

Zach Parise scored 39 seconds into overtime for the New York, which overcame a trio of one-goal deficits to beat Columbus in Elmont, N.Y.

Parise fired a shot beyond the glove of Blue Jackets goalie Joonas Korpisalo to cap an end-to-end rush and give the Islanders their eighth win in 10 games. Brock Nelson scored twice in the second period while Scott Mayfield collected a goal in the third for the Islanders. Goalie Ilya Sorokin recorded 26 saves.

Cole Sillinger and Emil Bemstrom scored in the second, and Marcus Bjork, making his NHL debut, scored in the third for the Blue Jackets, who have lost six of seven. Korpisalo made 41 saves.

Juuse Saros made 34 saves, Juuso Parssinen scored in his NHL debut and Nashville held off the visiting New York.

Mark Jankowski also scored for the Predators, who avoided a third consecutive loss overall and snapped a three-game home skid to the Rangers. Nashville allowed five goals apiece in each of its last two contests but stifled New York on Saturday, killing all five of the visitors’ power-play chances, including a late four-minute opportunity.

Saros allowed 13 goals in his previous three starts but came up big when needed, especially during the third period when he stopped all eight shots from New York. The Rangers’ lone goal came from Filip Chytil in the second period.

Nathan MacKinnon had a goal and an assist, and Pavel Francouz turned away 24 shots for Colorado, which has won four in a row. The Avalanche played the last two periods with five defensemen when Kurtis MacDermid was ruled out with a lower-body injury.

Jordan Staal scored, and Antti Raanta made 24 saves for the Hurricanes, who have lost three of their last four.

Elias Lindholm and Adam Ruzicka each had a goal and an assist, and host Calgary snapped its seven-game winless streak by knocking off Winnipeg.

Trevor Lewis also scored, and Jacob Markstrom made 21 saves for the Flames, who were 0-5-2 in their past seven games. Rasmus Andersson had two assists.

Pierre-Luc Dubois scored a goal in his fourth straight game for the Jets, who were 6-0-1 in their past seven games. Neal Pionk also scored, while Connor Hellebuyck made 32 saves.

Jordan Binnington made 34 saves, including 22 in the third period, as visiting St. Louis held on to end Vegas’ nine-game winning streak.

Binnington improved to 7-1-3 in his career against the Golden Knights. Ryan O’Reilly had a goal and an assist, and Brandon Saad and Ivan Barbashev also scored goals for St. Louis, which won its second straight game following a team-record eight-game losing streak.

Reilly Smith and Phil Kessel scored goals for Vegas, which lost for the first time since Oct. 22 when it fell to the Colorado Avalanche. The Golden Knights were attempting to tie their franchise record of 10 straight wins, set April 9-28, 2021.

Jarred Tinordi scored his first two goals of the season, including the go-ahead goal with 2:42 remaining, as visiting Chicago rallied past Anaheim.

Filip Roos also scored a goal, the first of his career, as Chicago received all three goals from defensemen and extended their winning streak over the Ducks to eight games. Tinordi’s game-winning goal from above the left circle first deflected off Anaheim’s Adam Henrique, then rebounded off Ducks defenseman Dmitry Kulikov before finding its way into the net past goalie Anthony Stolarz.

Troy Terry scored 19 seconds into the game for the Ducks and Henrique also had a first-period goal, but Anaheim was held scoreless over the final 48 minutes. The Ducks’ John Klingberg hit the goalpost with less than a minute to play but did not score.

Defenseman Sean Durzi scored a pair of goals in the second period and Los Angeles swept its four-game homestand, hanging on to beat Detroit.

Carl Grundstrom and Kevin Fiala had a goal apiece, and Arthur Kaliyev and Phillip Danault dished out two assists each. Goaltender Cal Petersen stopped 18 shots. Los Angeles’ victory was its sixth straight over Detroit. The club is 5-0 against the Eastern Conference’s Atlantic Division.

Detroit’s Dominik Kubalik had a power-play goal and an assist, and Filip Hronek scored and had a helper. Dylan Larkin tallied on the man advantage, and netminder Alex Nedeljkovic made 17 saves. David Perron recorded two assists to give him 401 for his career.