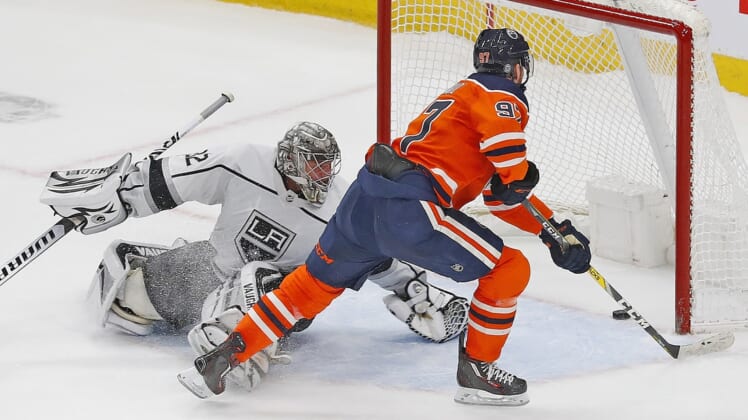 Connor McDavid reached the 100-point plateau with a goal and an assist and Leon Draisaitl tied for the league lead in goals as the Edmonton Oilers recorded a 4-3 shootout victory over the visiting Los Angeles Kings on Wednesday.

Both McDavid and Draisaitl scored during the shootout, breaking the deadlock after both teams went scoreless during the third period and overtime. The win moves the Oilers one point behind the Kings in the race for second place in the Pacific Division.

Carl Grundstrom and Alexander Edler each had a goal and an assist as Los Angeles fell to 1-1-2 in the past four games. Quinton Byfield also scored for the Kings, who got 30 saves from Jonathan Quick.

Blake Wheeler scored in regulation and added the decisive goal in the third round of the shootout to lift visiting Winnipeg to victory over Buffalo.

Pierre-Luc Dubois and Mark Scheifele scored in the first two rounds for the Jets, while Victor Olofsson and Alex Tuch answered in the second and third rounds for the Sabres. That set up Wheeler, who buried his chance against Craig Anderson (25 saves) to send Winnipeg to its third straight victory and ninth in its last 12 games.

Andrew Copp scored the game-winning goal 1:34 into overtime to lead New York to a road win over Detroit.

Copp took a pass from Artemi Panerin in front of the Detroit goal and buried the chance for the Rangers, who have won four straight.Detroit lost its fourth in a row.

Detroit took a 4-3 lead with 14:04 remaining in the game when Adam Erne scored on a backhand shot from in between the face-off circles, but the Rangers tied the game at 4 with 3:38 left on a power-play goal by Chris Kreider.

Special teams goals by Robert Thomas and Ryan O’Reilly cued a comeback for St. Louis, which claimed a road victory over Vancouver.

Nick Leddy and Nathan Walker also scored for the Blues, who claimed both halves of a home-and-home series with the Canucks and now boast a 13-3-2 mark against Vancouver in the past 18 regular-season meetings.

Elias Pettersson scored twice and Alex Chiasson tallied once for the Canucks, who are 2-4-2 in their past eight games. Thatcher Demko stopped 20 shots.

Jan Jenik scored his first two goals of the season and Karel Vejmelka made 40 saves as Arizona ended a six-game losing streak with a victory over San Jose in Glendale, Ariz.

Nick Ritchie, Barrett Hayton and Nick Schmaltz also scored for the Coyotes. The victory was bittersweet as Coyotes forward Clayton Keller left on a stretcher with 5:15 remaining after crashing into the end boards with his right leg taking the brunt of the impact.

Scott Reedy and Brent Burns scored goals for the Sharks, while James Reimer had 19 saves. San Jose fell to 3-4-1 in the past eight games.

Shea Theodore, Michael Amadio and Jonathan Marchessault scored for Vegas, which won its third in a row as it chases a Western Conference playoff berth. Marchessault also had an assist.

Kraken goaltender Chris Driedger stopped 27 of the 29 shots he faced.