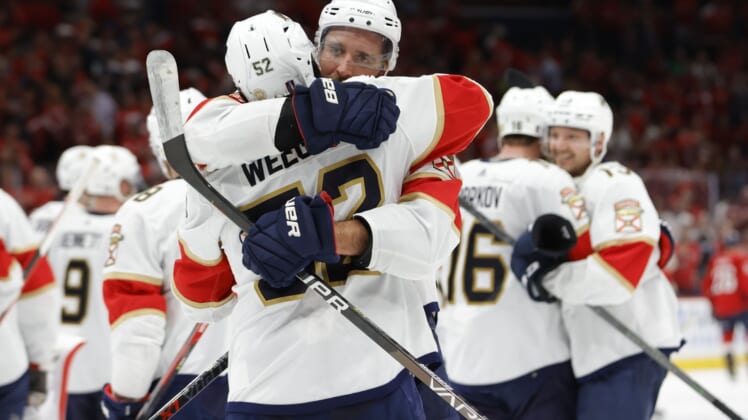 Carter Verhaeghe’s goal 2:46 into overtime gave the Florida Panthers a series-clinching 4-3 victory over the host Washington Capitals in Game 6 of their first-round Stanley Cup playoff series.

Coming off a franchise-record and NHL-high 122 points in the regular season, Florida won its first postseason series since the 1996 Eastern Conference finals, the longest playoff drought of any team in the NHL. The Panthers are headed to the second round to face the winner of the series between the Toronto Maple Leafs and Tampa Bay Lightning.

Verhaeghe also scored the overtime winner in Game 4, adding to a spectacular series for the Panthers forward. With a goal and an assist in Game 6, Verhaeghe led all players with 12 points (six goals, six assists) in the series. Verhaeghe was a game-time decision to even take the ice in Game 6, after missing the morning skate with an undisclosed injury.

Claude Giroux had a goal and two assists, fueling the Panthers’ third consecutive comeback win. With the Capitals leading 2-1 through 48 minutes of play, Giroux equalized at 8:18 of the third period, then recorded helpers on both Aleksander Barkov’s go-ahead goal and Verhaeghe’s overtime winner.

Nic Dowd, Nicklas Backstrom and T.J. Oshie all scored for Washington, with all three players coming close to hero status. Dowd hit two posts in the third period, Backstrom’s third-period goal gave the Capitals the lead, and Oshie forced overtime with a power-play marker with 63 seconds left in regulation.

Chris Kreider’s second goal of the night was the tiebreaker with 1:28 left in the third period as visiting New York topped Pittsburgh to set up a Game 7 in the first-round Eastern Conference playoff series.

Kreider’s slapshot from the left point popped off of and over Louis Domingue to break a 3-3 tie. Andrew Copp added an empty-netter with 26.4 seconds left, completing New York’s rally from a 2-0 deficit. Mika Zibanejad had two goals and two assists while Adam Fox had four assists for the Rangers, who have won two straight to even the series.

Jeff Carter, Bryan Rust and Evgeni Malkin scored for the Penguins, and Domingue made 33 saves. Pittsburgh played without captain Sidney Crosby, who left Game 5 after a high hit by New York’s Jacob Trouba. Game 7 is scheduled for Sunday in New York.

Roope Hintz and Michael Raffl each had a goal and an assist and Tyler Seguin added an empty-net tally for the Stars. Jake Oettinger made 36 saves for the win.

Michael Stone collected one goal and one assist, and Mikael Backlund also scored for the Flames. Jacob Markstrom stopped 36 shots.