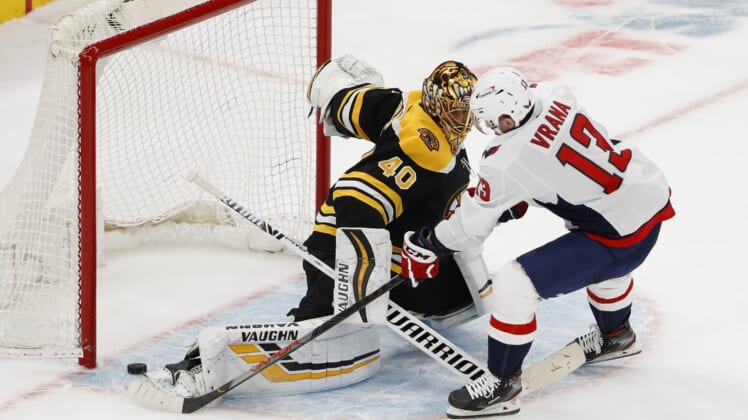 Jakub Vrana scored in the first round of the shootout, and Vitek Vanecek held on in net, leading the Washington Capitals past the host Boston Bruins 2-1 Wednesday night.

Vrana skated out wide and beat Tuukka Rask on a deke before Vanecek (18 saves) turned away all three attempts he faced as the Capitals won their fourth straight. Lars Eller scored in regulation.

Rask had 27 saves, including standout stops on Dmitry Orlov and Nicklas Backstrom in overtime, for the Bruins, who have dropped three of four (1-2-1). David Pastrnak scored.

Capitals defenseman Zdeno Chara received a video tribute during the first period in his first game back in Boston after 14 years with the Bruins. The video featured praise from fans, who aren’t allowed in attendance at TD Garden until the end of the month.

Jimmy Vesey scored twice and goaltender Frederik Andersen made 26 saves in his return after missing four games to lead Toronto past host Edmonton. The Maple Leafs earned their third straight road win in the clash of North Division heavyweights.

Zach Hyman and John Tavares both netted one goal and one assist while Jason Spezza collected three assists for the Maple Leafs, who beat the Oilers by a combined score of 13-1 over the three clashes. Toronto, which has won four straight games, has posted a 15-2-2 mark since losing to the Oilers at home on Jan. 20.

Mikko Rantanen had two goals and two assists, Gabriel Landeskog added a goal and three assists and Philipp Grubauer made 26 saves as Colorado won at San Jose to earn a split of a two-game series.

The game took an ugly turn with Colorado leading 2-0 in the third period when San Jose’s Joachim Blichfeld, playing in his first game of the season and the fourth of his NHL career, was assessed a match penalty for a hit to the head of Colorado’s Nathan MacKinnon with 11:52 remaining.

Blichfeld’s shoulder nailed MacKinnon in the chin as the Avalanche forward was trying to dig the puck out of his skates in front of the benches. MacKinnon was helped off the ice by one of the team’s trainers, and he went straight to the locker room and didn’t return.

Oskar Sundqvist, Brayden Schenn and Zach Sanford each scored a power-play goal and Blues completed a sweep of a two-game set at Anaheim.

Blues goaltender Jordan Binnington made 27 saves in his first action since he was pulled in the middle of a 7-6 road victory over the San Jose Sharks on Saturday. St. Louis improved to 9-2-0 away from home this season, including 4-0-0 at Anaheim.

Marc-Andre Fleury made 36 saves, including 20 in the third period, as Vegas won its fourth straight game, beating Minnesota in Las Vegas.

Mark Stone, Alex Tuch, William Karlsson and Chandler Stephenson each had a goal and an assist for Vegas, and Jonathan Marchessault also scored. Nicolas Hague added two assists for the Golden Knights, who improved to 10-2-1 at home, tops for home wins in the NHL.

Second-period goals 13 seconds apart by Nick Schmaltz and Johan Larsson broke a deadlock and visiting Arizona held on for a victory over Los Angeles.

Antti Raanta made 40 saves for the Coyotes, who stopped a two-game skid. Raanta especially stood tall while stopping 17 shots in a one-sided third period dominated by the hosts. Clayton Keller also scored for Arizona.

The Kings got goals from Drew Doughty and Gabriel Vilardi, and Jonathan Quick made 20 saves.