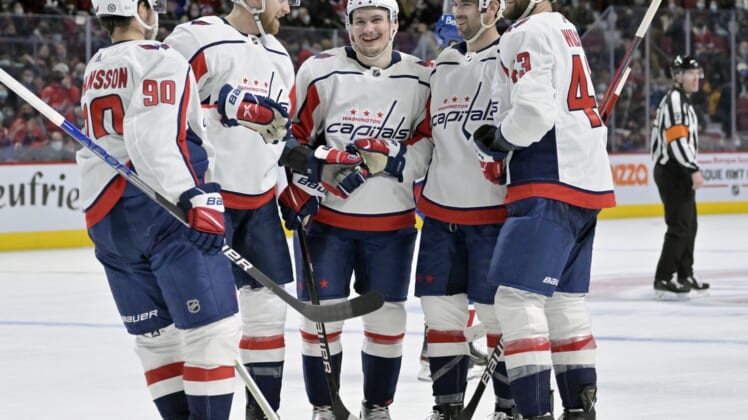 Marcus Johansson scored the go-ahead goal at 10:46 of the third period and the Washington Capitals defeated the Avalanche 3-2 on Monday night in Denver, snapping Colorado’s nine-game winning streak.

Alex Ovechkin scored his 48th goal of the season and Garnet Hathaway added a goal for the Capitals, who have won six of seven. Ilya Samsonov made 24 saves.

Ovechkin, who has six goals in his past seven games, needs two more for his ninth 50-goal season, which would tie Wayne Gretzky and Mike Bossy for the NHL record.

Darcy Kuemper made 24 saves for the Avalanche, who entered the game 29-2-2 in their past 33 home games. Colorado’s Valeri Nichushkin and Artturi Lehkonen scored.

Victor Rask scored the tiebreaking goal late in the second period and recorded an assist as Seattle beat visiting Ottawa.

Seattle’s Matty Beniers continued an impressive start to his NHL career with a second goal in his three games. Daniel Sprong also scored and Jared McCann had an empty-netter for Seattle, which posted back-to-back victories for the first time since March 19 and 22.

Brady Tkachuk and Nick Holden scored for the Senators, who were held to a season-low 14 shots on goal. Ottawa had won four of its previous five on the road.

Elias Pettersson scored twice in a three-point game to lead host Vancouver to a victory over Dallas to keep its playoff hopes alive.

Brock Boeser and Jason Dickinson both collected one goal and two assists, Vasily Podkolzin produced one goal and one assist and Conor Garland added a goal for the Canucks, who are riding a six-game winning streak. Thatcher Demko made 28 saves for Vancouver, which is four points back of the Los Angeles Kings for the third spot in the Pacific Division and five out of a wild-card position with six games remaining.

Roope Hintz scored both goals for the Stars, who are tied with the Nashville Predators for the two Western Conference wild-card spots. Starting goalie Jake Oettinger surrendered four goals on 19 shots before being pulled. Scott Wedgwood stopped 10 of 11 shots in relief.

Johnny Gaudreau scored twice, including the game-sealing empty-netter, and Blake Coleman and Oliver Kylington each had a goal and an assist to lift visiting Calgary past Chicago.

Alec Regula and Tyler Johnson scored for the Blackhawks, who got 30 saves from Kevin Lankinen.

Andrew Hammond made a season-high 42 saves and New Jersey Devils twice in a span of 4:43 in the third period and held on for a victory in Las Vegas.

Andreas Johnsson and Jesper Boqvist scored in the opening 7:57 of the third as the Devils secured a 3-1-1 road trip. Nathan Bastian also scored for New Jersey.

Keegan Kolesar scored in the second period and Chandler Stephenson scored with 1:14 left in the third for Vegas, which is 2-3-1 in its past six games. Robin Lehner stopped 25 shots.