NHL roundup: Canucks down Ducks in OT for 7th win in row 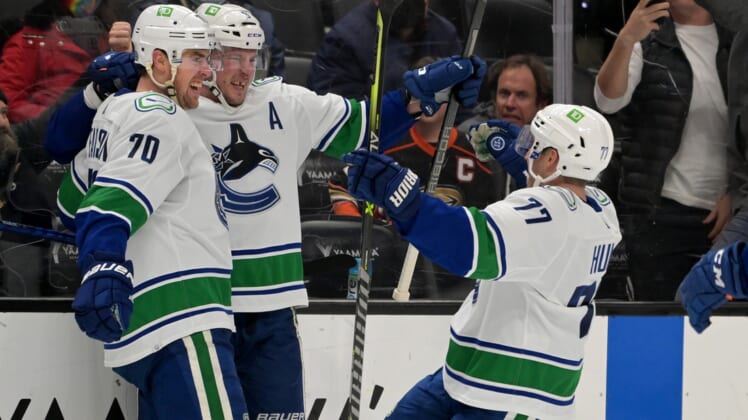 J.T. Miller scored on a breakaway 26 seconds into overtime as the visiting Vancouver Canucks extended their winning streak to seven games with a come-from-behind 2-1 victory over the Anaheim Ducks on Wednesday.

Tanner Pearson scored early in the third period for the Canucks, who have won nine of their past 10 games, with much of the winning run coming after Bruce Boudreau replaced fired head coach Travis Green on Dec. 6.

Thatcher Demko had 22 saves for the Canucks, who defeated the Ducks for the first time in three tries this season.

Sam Carrick scored a first-period goal for the Ducks, and John Gibson made 35 saves.

Ivan Provorov scored on a breakaway 2:14 into overtime as Philadelphia won at Seattle.

James van Riemsdyk tallied twice for the Flyers, who extended their season-high points streak to six games (5-0-1). Martin Jones, filling in with goaltender Carter Hart, who played his junior hockey in nearby Everett, Wash., in the league’s COVID-19 protocol, made 34 saves for the win.

Yanni Gourde and Jeremy Lauzon scored for Seattle and Philipp Grubauer stopped 19 of 22 shots. The Kraken fell to 1-4-2 in their past seven games.

Carter Verhaeghe scored the go-ahead goal with 9:29 left in the third period as Florida rallied to beat New York in Sunrise, Fla.

The Panthers entered the third trailing 2-1, but they tied the score on a goal by MacKenzie Weegar and went ahead on Verhaeghe’s wrist shot. Anthony Duclair followed with Florida’s third goal of the period. Anton Lundell scored Florida’s other goal, and Sergei Bobrovsky made 30 saves to earn the win.

Artemi Panarin and Mika Zibanejad each had one goal and one assist for New York. Chris Kreider also scored, and Igor Shesterkin stopped 28 shots.

Jack Hughes scored the tiebreaking goal 4:28 into the third period and collected two assists in the first period as visiting New Jersey ended a six-game losing streak with a victory over Buffalo.

Tage Thompson scored twice in the opening 3:17 of the second and Ethan Prow also scored in his NHL debut for Buffalo. Ukko-Pekka Luukkonen recorded 38 saves.

John Carlson had a goal and three assists and Evgeny Kuznetsov scored a short-handed goal to give Washington a win over visiting Nashville.

The result snapped the Predators’ seven-game win streak, tied for the third-longest run in franchise history. Carlson recorded the first four-point game of his NHL career. Carl Hagelin had an assist and an empty-net goal for Washington, while Dmitry Orlov had two assists.

Vladimir Tarasenko and Jordan Kyrou had a goal and two assists each to lift St. Louis past visiting Edmonton.

Robert Thomas and Brandon Saad also scored and Jordan Binnington made 26 saves for the Blues, who are 6-1-2 in their past nine games overall and 9-0-1 in their past 10 home games. St. Louis’ Craig Berube earned his 200th NHL coaching victory.

Leon Draisaitl and Evan Bouchard scored for the Oilers, who lost for the seventh time in their past nine games. Mike Smith returned from his leg injury to make 29 saves for Edmonton in his first start since Oct. 19.