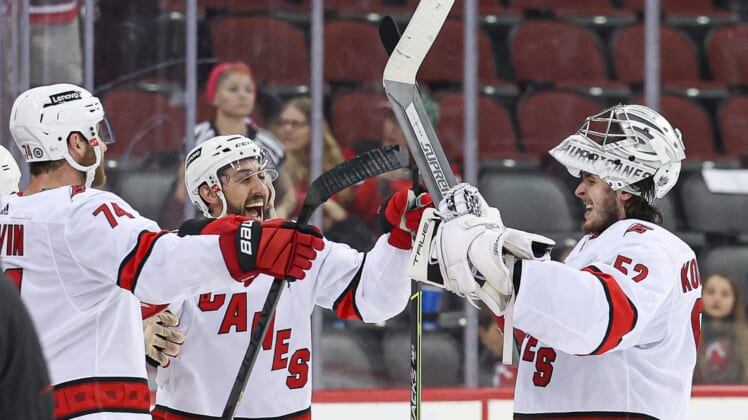 Seth Jarvis scored at 1:39 of overtime to complete a huge rally for the Carolina Hurricanes in a 3-2 victory against the New Jersey Devils on Saturday afternoon at Newark, N.J.

Brady Skjei and Nino Niederreiter scored in the last 5:36 of regulation as Carolina produced a third-period uprising for the second game in a row. Niederreiter’s tally came with 1:56 left after the Hurricanes went with an extra skater.

Yegor Sharangovich had a goal and an assist as the Devils appeared ready to deal a blow to Carolina’s hopes for a divisional title. Nico Hischier also scored for New Jersey. Devils goalie Jon Gillies made 26 saves.

Rasmus Dahlin snapped a tie by scoring the first of three unanswered second-period goals for Buffalo, which built its longest winning streak in more than three years by beating visiting New York.

Casey Mittelstadt scored in the first, Tage Thompson and Vinnie Hinostroza scored later in the second, and Jeff Skinner added a goal in the third for the Sabres, who have won four straight. It’s their longest winning streak since a 10-game run Nov. 8-Nov. 27, 2018. Goalie Dustin Tokarski made 19 saves.

Mathew Barzal scored in the first, and Noah Dobson and Kieffer Bellows scored fewer than two minutes apart in the third to generate a late comeback attempt by the Islanders, who have lost four straight. Goalie Ilya Sorokin recorded 30 saves.

Kris Letang had a goal and two assists to lead Pittsburgh to a road win over Detroit.

Evgeni Malkin scored two goals, and Sidney Crosby and Rickard Rakell each had a goal and an assist for Pittsburgh. Casey DeSmith stopped 23 of 25 shots for Pittsburgh.

Jakub Vrana and Michael Rasmussen scored in defeat for Detroit. Thomas Greiss stopped 18 of 23 shots in two periods for the Red Wings, before Alex Nedeljkovic made 13 saves in relief.

David Pastrnak recorded a goal and an assist to reach the 500-point mark for his NHL career to lift Boston to a win over visiting New York.

Pastrnak had missed the previous eight games due to injury. Taylor Hall and Trent Frederic also scored goals for the Bruins, who have won three of four following a Thursday loss in Pittsburgh and snapped New York’s four-game win streak.